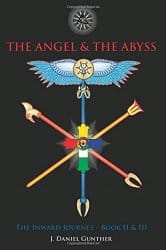 Initiation in the Aeon of the Child focused the initiation of the magus and the beginning of their magical journey within a Thelemic framework, if the title didn’t give it away. The Angel and the Abyss continues this inward journey by engaging the ideas of the Holy Guardian Angel, Knowledge and Conversation, and Crossing the Abyss.

The Angel and the Abyss deals with “the work of the junior and senior Adepti, the Babe of the Abyss, and the Magister.”1 As Shiva X° explains, Knowledge and Conversation and Crossing the Abyss “are often commented upon, yet the ease and lure of popular comment can result in them being mischaracterized and misrepresented, potentially misleading new students and confusing even experienced practitioners”2 but Gunther thoroughly and intelligently explains through the various classes of writings of Aleister Crowley, texts used by the A∴A∴, and writings of various mystics just what these experiences are.

For those less familiar with the system, the writings of Crowley are broken down into five classes, which dictate whether they are consider essentially infallible texts, or the result of research, or more speculative thought. Sometimes people will use a more speculative text to try to support their position even when an “infallible” text disagrees. Gunther compares what was said across the classes of texts, to sort out what is (in the Thelemic system) the way things are, and what is possibly the way things are. This discourse alone in the text really helps give the reader the sense of what is meant by Knowledge and Conversation, and Crossing the Abyss, far more than any other writing I’ve come across.

Even though a lot of the explanation is revealed in mystical jargon, due to the nature of the experiences not through obfuscation, though the more familiar the reader is with Thelema and the kabbalah the easier it will be to make use of what is in the text. This is probably one of the, if not the, most intelligent and thought-provoking book on magick I’ve read in the past year. The book takes its cosmology and philosophy from Thelema, but draws on psychology (mainly Jungian), Egyptian mythology, medieval alchemy, and a variety of other sources and brings them together to illuminate, explore, and explain the journey of the serious magus.

While Crowley took elements from Egyptian mythology for the system of Thelema it has become evident since then that his understanding (based on the knowledge of the time) was flawed, making Thelema something that only has a superficial connection to the images of ancient Egypt. Gunther shows that maybe Crowley was more correct than he was given credit for, perhaps through some gnostic experience, but Gunther manages to synthesize and explore Egyptian myths and show that they really do express a parallel with the Thelemic cosmology, and can work to explain the formula of the Aeon of Horus.

One of the most refreshing qualities of this text was that, despite being drawn from Crowley’s work, it was an original text and original thought and research. It seems the majority of books based on Crowley’s writings are either attempts at “easy reader Crowley,” or just a reorganized collection of his ideas rehashed. The Inward Journey trilogy, and especially The Angel and the Abyss, is something new. It clarifies some of Crowley’s ideas, but not by dumbing them down, but really investigating what was said, breaking it down, comparing it, and coming to a conclusion. It’s this type of writing that the Ordo Templi Orientis and A∴A∴ have not really been producing, and I think Gunther’s work shows that it can be done, and is a necessary step for the system and the people involved.

The Angel and the Abyss is most coherent text on Knowledge and Conversation, and Crossing the Abyss that I’ve ever read. Even if you’re not a Thelemite, if you’re familiar with the concepts of Knowledge and Conversation, or Crossing the Abyss, and moreso have considered undertaking them, this book will definitely help you understand some of what is involved, and more importantly get you critically thinking about the process.