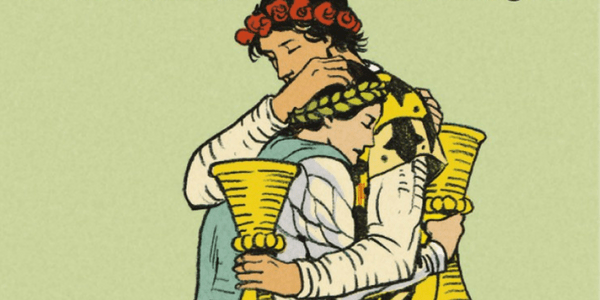 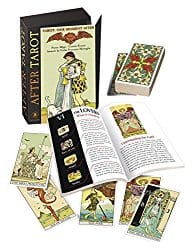 The premise of the After Tarot is that the cards within it take place moments after the scenes that appear in Pamela Colman Smith‘s Rider Tarot commissioned by Arthur Edward Waite. As such, it is a Rider-Waite-Smith deck, but one with a twist.

In the accompanying book, Afterthoughts: The Guide to the After Tarot, Corinne Kenner describes Smith’s familiar scenes as “snapshots in time,”1 where the After Tarot has added new emblems and characters with the intent of furthering the stories suggested in the Rider Tarot. It’s a neat idea, and the results certainly are interesting.

That said, as is often the case in introductory tarot guidebooks, the section on the history of tarot is needlessly vague and obscure. Kenner’s description of the tarot is that it is “two decks in one,”2 being the major and minor arcana, or greater and lesser secrets — familiar tarot mysticism with no attachment to tarot’s actual historical origin. But then, that isn’t the point of this book. Instead, the After Tarot guidebook offers numerous covert nods to the mystic tradition of the Golden Dawn, and its tarot associations, along with some contemporary innovations to refresh it for the reading of this deck.

Before Kenner delves into the meanings of the cards, she offers suggestions on how to read the cards, including how to handle reversals, laying out spreads, with a note on time as it is represented in the present deck. Readers who are already familiar with tarot, particularly Rider-Waite-Smith imagery, can then delve right in. For those who need more guidance, her instructions are simple and clear.

As is common with new decks, Kenner includes a spread designed specifically for this one, the After Tarot Spread.3 Timing seems to be of great importance to Kenner, and she shares some superstitions about the sun as a marker of time and power, which surprised me. However, her recommendation for keeping a tarot journal will be invaluable for anyone not yet already doing so.

She takes a somewhat fatalistic approach to divination, suggesting that by reading tarot, we are “venturing into an alternate future,” and warns that if we “stay there too long, [we] won’t be able to return.4 Interestingly, Kenner offers a method for reversing the effects of a reading, and randomizing “the future flow of time.”5 A chart is provided to introduce the astrological signs and planetary subrulers governing each card, as well as the date range indicated.

Following this, we get into the descriptions of the cards, first numerologically for the pips and associated trump cards. Finally, each cards gets a description, key symbols, and suggested interpretations for each card. Each also comes with a short phrase or motto.

The Fool has fallen off the cliff, but seems unconcerned; and the Magician has levitated the suit signs. The High Priestess is the least changed of the first three cards, though she has gained a new emblem; in addition to the Torah scroll she usually holds, she also clutches a pair of crossed keys, echoing those later found in the Hierophant.

The cards are Rider-Waite-Smith derived and, as such, it maintains and even reinforces the duality of a male-female false binary, and continues the tradition of white, heteronormative explanations for the cards. (For example, see the Two of Cups, and the Empress.)6

Some of the imagery retains the same meaning as the Rider-Waite-Smith, but there are also some significant adaptations. The Four of Cups is an interesting case. Instead of a young person being offered a new opportunity in the clouds, the figure is in the act of pouring out the cup’s contents — as if rejecting it or offering it as a libation and returning it to the earth. It opens up new interpretations to explore.7

Kenner presents the cards in numerological groups. So, for instance, the fours of the pips become associated with the IV of the Emperor and XIII of Death (XIII being numerologically reduced to four). This opens up the imagery in the After Tarot as well, where Death appears over the shoulder of the miser in the Four of Pentacles. It again opens up new associations between the cards. The Emperor is armoured, as if acknowledging the inevitability of battle and eventual death. Death, finally, is what truly rules and determines our end. These are associations I had not previously considered in 20 years of working with tarot, and this configuration teases out new, otherwise obscure associations.

The accompanying book would have benefited from a more thorough edit. Em-dashes are rendered as fractions, and some content is repeated (as in the Moon).8 Language is used carelessly in many places, and attempting to resolve mixed metaphors becomes taxing. There are factual errors in the text as well, such as when the characters in the Wheel are assumed to be Arabic when they are clearly Roman (the Hebrew name of god is given more or less correctly), or the figures surrounding the Wheel are assumed to be signs of the zodiac, rather than the Four Evangelists (the bird is the Eagle of St. John, not a phoenix for Scorpio). ((p. 139)) These esoteric associations may have been made later in the game, but they make little sense in context of the Renaissance origins of the tarot. That said, there are no footnotes, no bibliography, no resources offered to further one’s knowledge of the tarot. History isn’t a primary concern for this deck.

The After Tarot Kit is an incredibly interesting deck, and much can be gained from placing the images of the Rider Tarot alongside the After Tarot, and drawing connections between the two.