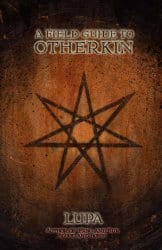 A Field Guide to Otherkin is the first full length treatment of this subculture. It has an extensive bibliography, and a significant amount of material is drawn from surveys submitted from Otherkin and Lupa’s own experience, as she identifies as Otherkin herself.

Otherkin are people who are physically human, yet believe some aspect of their being to be wolves, foxes, or even fae, dragons and other fantastic creatures. Where in totemism a connection has been forged with an external entity, Otherkin identify the “other” as a part of themselves.

Lupa defines someone who considers themselves to be Otherkin as “a person who believes that, through either a non-physical or (much more rarely) physical means, s/he is not entirely human. This means that anyone who relates internally to a nonhuman species either through soul, mind, body, or energetic resonance, or who believes s/he hosts such a being in hir body/mind.”

I know several people who self-identify as Otherkin, some of whom contributed surveys intended for this field guide, but I’m not well acquainted with the subject. This book has certainly helped me sort out what someone means when they say they are Otherkin.

The first section of the book gives an overview of Otherkin, theories of origins, and introduces various types, such as therianthropes, vampires, elves, fae, dragons, grypons and other mythological creatures, and the miscellaneous. Indeed, some Otherkin don’t have words to describe how they view their “true selves” and may pick and choose among what’s known. Lupa allows that “[s]emantics may also have something to do with it; if a person possesses an intelligent but animal ‘energy’ that doesn’t quite resonate with mundane animals, s/he may be more likely to identify it with ‘dragon’ than the lesser-known ‘gryphon.’” However, she confers far greater credulity than seems reasonable when she writes that “[t]his may explain the influx of gryphon-identified Otherkin after the publication of Mercedes Lackey’s Valdemar series of fantasy novels, which featured intelligent gryphons.” That said, she also notes that “[s]ome say it was because the books served to Awaken more gryphonkin; others argue that it resulted in a lot more wannabes.”

Lupa presents a rational and balanced view of the subject. While a significant amount of space is dedicated to acknowledging and accepting one’s “‘kin status,” there’s also a great deal allotted to questioning who or what one is and why one would want to identify as something other than human.

Recognizing that “wannabes” can be a problem; she writes “Otherkin have, to an extent, become a fad. Like it or not, there are certainly those who simply latch onto an idea that appeals to them, but doesn’t fit them whatsoever. Rather than participating in the deep soul-searching that most serious seekers use, they instead try to find any excuse to prove their ‘kin side.” She offers suggestions for those who think they may be Otherkin, but aren’t quite sure, and advice on how to “come out” — or not.

I tried to keep an open mind when reading this book, but when the subject of “Mediakin” and “Otakin” arose — “those who identify with beings from movies, books and other media, though anime and manga tend to be the most common influences” — I couldn’t help but think that surely a line must be drawn somewhere? While she acknowledges scepticism by many, she affords “Mediakin” the same fair treatment, which, to my mind, undermines her presentation of the subculture to some degree. At what point do you call it?

The appendices include a note on Otherkin gatherings, Lupa’s completed survey, statistics from the collected surveys, and, interestingly, the results of an interview with Su Fenton, a professional with a degree is social work licensed in psychotherapy. Fenton indicated that were someone to come to her with this, she wouldn’t immediately label them with a “big diagnosis” were the individual able to express the ability to “think about it with complexity, to enjoy it, to sometimes get into it, to look at it with distance.” However, she states that she “might challenge some of it, maybe, how you perceive it, but you’re already open to the challenge,” but ultimately, she says, “whatever works as a metaphor for you and [is] meaningful, and it’s amazing.” In short, Otherkin who are able to function in the world with some success are unlikely to be thrown into small rooms with comfy walls wearing love-yourself jackets. Fear not.

A Field Guide to Otherkin offers an insider’s perspective on the subculture from a variety of voices, and proves a great resource for anyone wanting to learn more about it: suggesting balanced self-questioning for those who consider themselves Otherkin, while explaining what it’s all about to the non-‘kin, ‘kin-curious.