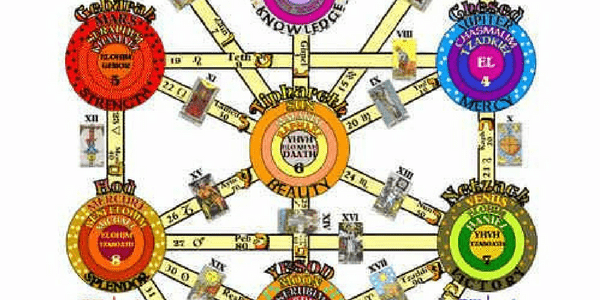 Western magick is based upon the Cabala, a Jewish mystical tradition first written down in 12th and 13th century southern France and Spain. It was oral before that; and it contains the “lost” knowledge of the ancients, possibly going back to Egypt and before. The most important Cabalistic books are SEPHIR YETZIRAH (The Book of Creation), and the ZOHAR (Book of Splendour). Through Cabalistic philosophy we are able to classify and “pigeon-hole” all of existence.

The four worlds are recognized in the Cabala, but they are given Hebrew names. Thus — Assiah, physical; Yetzirah, astral; Briah, mental; and Atziluth, spiritual; as shown in the chart.

The Cabalistic parts of the soul use new names for the three highest vehicles of consciousness. NESHAMAH (Divine Soul) is the Spiritual body; RUAH (Moral Soul) is the Mental body; and NEFESH (Animal Soul) is the Astral body.

An important attribute of the Cabala is the SEFIROTIC TREE (or “Tree of Life”, Otz Chieem). The Sefirotic Tree is a diagram of the universe made up of the ten SEFIROTH (primal numbers or orders of creation) drawn as circles upon the Tree in a descending pattern from the highest aspect of God at the top to the most physical aspect of our world at the bottom. As can be seen in the accompanying diagram, the sefiroth are connected together with numbered lines, called paths.

This is my attempt to draw a Sefirotic Tree using ASCII characters. Several paths are omitted (15, 17, 29, 31). Please refer to a printed diagram (in most any book on Cabala) for a better illustration.

Above the Tree is the infinite void — the unknowable, unmanifest God as Divine Light — the three veils of negative existence: Ain, Ain Sof, and Ain Sof Aur. The Divine Light (Ain Sof Aur) is made manifest by the first sefira where it is transformed into positive existence. Emanations of energy (magical current) flow from the first sefira (Source) along the paths into other sefiroth which transform and emanate to lower and lower sefiroth. In Adam Kadman (primal or ideal man) the sefiroth fit upon the physical body; note the similarity to the chakras. The process of creation is one of emanation from the spiritual at the top of the Tree to the physical world (Sink) at the bottom. All current which is Sourced into the Tree must also be Sinked (earthed). That is, magical energy set in motion by ritual shoud be used up in the physical world whether or not the ritual was a success.

Sefiroth 1, 2, and 3 on the Tree form the Supernal Triangle which is beyond normal human experience in the world of Atziluth. The first sefira, KETHER, is the supreme *crown* of God; it signifies pure Being, and is the Source. Kether is androgynous. Immediately arising from Kether are two further emanations. The second sefira is HOKMAH, the *wisdom* of God and the masculine force of the universe. Third is BINAH, the *understanding* or intelligence of God; this is the supernal mother.

Between the Supernals and the other seven sefiroth is the Abyss — a great gulf which forever separates ideal from actual. Within the Abyss an 11th sefira, DAATH, the *knowledge* of God is sometimes placed.

The second triangle, comprised of the 4th, 5th, and 6th sefiroth in the world of Briah, is sometimes called the Mental Triangle. Sefira 4, HESED, the *love* or mercy of God, is male and positive. The 5th sefira, GEVURAH, the power or *strength* of God complements Hesed as justice. Sixth is TIFARETH, as the compassion or *beauty* of God; the heart of the universe.

The third or Astral Triangle contains sefiroth 7, 8, and 9 in Yetzirah. Sefira 7, NETSAH, is the lasting endurance or *victory* of God. Complementing Netsah is 8, HOD, the majesty or *splendor* of God. The 9th sefira, YESOD, the *foundation* of the world, is linked with the moon, hence the tides and the libido. Yesod is experienced as dream consciousness, and is very important in magick and astral projection.

Finally, at the physical world of Assiah is the 10th sefira, MALKUTH, the *kindgom* of God, and the basis of all material creation. We experience Malkuth as sense consciousness.

The Sefirotic Tree has three vertical columns or *pillars*. As you face the tree, the pillar on the right, headed by Hokmah and ending with Netsah, is called the Pillar of Mercy and has light/masculine (yang) qualities. The pillar on the left, headed by Binah and ending with Hod, is the Pillar of Severity with dark/feminine (yin) qualities. The Middle Pillar between them equilibriates the two opposites, and is the *Shekhinah*, or feminine counterpart of God. The *klippoth*, or evil demons, generally in Assiah, represent unbalanced forces or excesses.

All the attributes of the universe fit like pieces of a puzzle upon the Sefirotic Tree. Each numbered part is a numeric key to the various correspondence tables, such as Crowley’s ‘777’. The sefirotic tree has its parts variously coloured and each sefira has a colour; in fact the paths which run between the sefiroth have their own colours too. There are four major colour scales for the sefirotic tree and each colour scale corresponds with one of the four worlds. That means we are dealing with not just one sefirotic tree, but actually with a separate tree for each of the four worlds; although it is easier to think of it as the same tree with a different color scale. The Queen (Briah) and King (Atziluth) scales are the most important. There is also the Empress scale (Assiah), and the Emperor scale (Yetzirah).

The 22 paths connect the sefiroth together. These paths correspond with the 22 letters of the Hebrew alphabet, as based upon the SEFIR YETZIRAH. Due to the nature of the Hebrew alphabet (some letters can take two forms) SEFIR YETZIRAH divides each of two of the letters into two (dual) parts. For this reason, it is necessary to divide each of the two related paths into two (dual) parts. These are numbered 31, 31b (bisected); 32, 32b. Yet when these paths are drawn on the sefirotic tree they are usually shown undivided (and numbered simply 31, and 32). The following table shows the colours and location of the paths in relation to the sefiroth. You will want to add the path numbers to the illustration of the sefirotic tree, or draw a new tree. Some writers may refer to “32 paths”, by calling the sefiroth “paths” 1-10.

The queen and king scales are complementary. Also complementary are the paths and the sefiroth. Traditional use of the queen scale sefiroth will find the king scale as paths and vice versa. The use of complementary scales is based upon the idea of balance. A tree composed of sefiroth in the queen scale and paths in the king scale is all you need for most magick. Although correspondences are what work for you, there is said to be an ancient tradition surrounding the conventional color scales and it may be helpful to lock into the energy associated with them.

From the magical point of view, the Tree of Life is a map of consciousness which is useful for understanding and attaining various states of consciousness. In cabalistic magick we are concerned with the linking of higher energy to lower levels on the tree. That very thing takes place naturally as well, in nature and in life. A subject in itself is cabalistic meditation (pathwork, or the way of return), in which we attempt to climb up the tree (ladder of lights) to attain union with divinity.