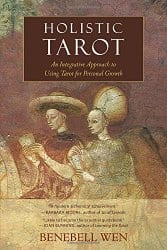 On page one of my book Holistic Tarot, I wrote, “I do not support fortune telling.” When I sat down to write my book, I made the conscious decision to state my position on that particular issue. I wanted to pull professional tarot practice outside the scope of anti-fortune telling laws that are still enforceable in many parts of the United States. More than that, my position comes from a definition of what fortune telling entails that might differ from Western perspectives, a personal definition influenced by the Chinese theory on fortune telling. I hope this article will provide context for my position.

Fortune telling (suànmìng) is a process based on immutable traditions or schools of study and so the result of the process is considered accurate, or indisputable. There is a sense that fortune telling is the revelation of what your fixed fate is. These traditions are assumed to be so accurate that the fortune told cannot be challenged. The forms of Chinese fortune telling that assess one’s date and time of birth, face reading, palmistry, or name analysis are often treated as incontestable, meaning they assert one’s predetermined life path. The two characters that make up the word, 算 (suàn) and 命 (mìng) suggest “calculating one’s fate,” which gives a sense of how the culture views fortune telling.

In contrast, divination (bǔshì) is a form of “kneeling before the Hierophant.” The diviner is not playing god, but is consulting god, or god’s messengers. God, of course, can be a reference to any deified figure, spirit, or higher consciousness as expressed by one’s personal gnosis. I’ll use the term “Divine.” Divination is about working within the limitations set by the Divine.

Bǔshì is a reference to a particular Chinese tradition of going before deities and drawing out divinatory sticks that correspond with prophetic verses believed to be an oracle from the Divine. Over time, the term has been used to encompass the concept of divination, which is about connecting to the Divine, to an energy that is beyond your physical self, beyond your consciousness or personal intelligence. The I Ching, for instance, is considered a form of divination, not fortune telling, because in I Ching divination, you are reaching beyond yourself, or at the very least, reaching beyond your conscious mind for answers.

In divination, an outcome remains mutable because it presumes that the Divine has granted the seeker free will. Thus, divination is the mere act of asking for counsel on the exercise of that free will. The seeker is stating his or her desired outcome and then seeking the powers beyond for guidance to enable that seeker to achieve the desired outcome.

While fortune telling is about applying what you know to a specific seeker, and thus the fortune teller is the consultant, divination is a form of consultation where the diviner isn’t the consultant per se, but rather the diviner is the intermediary, a medium. The true consultant in a divination is a higher energy form. Whether that higher energy form is expressed as deity, spirit, the higher self, the collective unconscious, the akashic records, or simply one’s psychic ability is a matter of how we express our religious beliefs.

Fortune telling and divination in tarot

Applying Chinese principles, fortune telling in tarot is the exercise of attempting to fix a person’s fate, or provide a revelation of someone’s fixed fate. A tarot practitioner who engages in fortune telling is in effect becoming an active participant in a seeker’s life path, and could be interfering with that life path, sometimes for the better, and unfortunately, sometimes for the worse.

In contrast, tarot divination is an exercise of seeking signs and omens to help us achieve the goals we have set for ourselves, and presumably, limited only to the signs and omens that a Divine is amenable to revealing to us at that time. Tarot divination isn’t interference, it’s guidance, and it’s guidance based on the acknowledgement of a greater power beyond, or the acknowledgement of a higher self within our unconscious mind that is more capable of making positive outcome decisions than the conscious self. Tarot divination is asking for warning signs and insights, helping us assess how much farther we have to go or how much harder we have to work. I’m speaking, of course, in terms of my understanding of the Chinese distinction between divination (bǔshì) and fortune telling (suànmìng), which as it is with any esoteric art, are not unanimously agreed upon.

Predictive tarot and its karmic effect

As I close my discussion, I’d like to talk about predictive tarot within the context of fortune telling and divination, and how I view its practice. Predictive tarot means gaining access to information that is not yet readily available to the human consciousness. Assuming such a feat can be performed, per my view, to do so a tarot practitioner would be using, borrowing, and thus exhausting karmic energy. Through the expense of karmic energy, the practitioner can then reach beyond a space-time continuum to obtain knowledge of future events. That energy expenditure is said to cause an outcome, manifest an energetic or karmic influence that turns an otherwise mutable outcome into an immutable one, rendered immutable by that fortune teller’s energetic or karmic interference.

Those gifted with the ability to become either fortune tellers or diviners face a choice. They can choose the path of the fortune teller and risk karmic exhaustion, facing the repercussions for using predictive energy, or they can exercise their gifts within the limitations set by the Divine and practice divination. I do not teach predictive tarot because I do not believe practitioners should take the practice of predictive tarot lightly. It is a choice that a practitioner must make at an advanced stage. Predictive tarot is not energy that the beginner should be dabbling with.

Projective tarot as an alternative

Projective tarot, however, is not the same as predictive tarot. Tarot can also be used to project possible future outcomes. Projection is an entirely different technique from predictive fortune telling. Projective tarot is about assessing current variables, though often it is the assessment of otherwise unseen metaphysical energy as variables, and is a form of divination where the tarot practitioner is careful to see only what the Divine is willing to divulge, and no more. In that way, it is a clear distinction from fortune telling, where the fortune teller strives to see all.

For the purpose of drawing a comparison, projective tarot is like rendering financial projections in a business plan. After analysis of market conditions and business objectives, a forecast is made of what a business can accomplish, how it can be accomplished, and why such forecasts are sound. Projective tarot is similar, though it will be an analysis of metaphysical conditions and spiritual or subconscious objectives. Thus, projective tarot does not work with predictive energy and therefore does not exhaust the practitioner’s personal karmic account.

In one sense, projection is about taking known variables and using tried and true algorithmic methods in tarot practice to figure out the most likely outcome, though that outcome is definitely subject to change should the seeker choose to make different decisions. When projective tarot appears to be predictive, it is only because humans tend to behave predictably. In my book Holistic, I do teach projection techniques.

I chose to opine against fortune telling in perhaps a patronizing attempt to protect aspiring tarot practitioners, though it goes without saying that ultimately, it is an individual practitioner’s own choice how he or she will be practicing tarot. Just note that predictive tarot or fortune telling requires the expense of a practitioner’s own karma, and the result can potentially be the experience of calamity in the fortune teller’s personal life. There are, however, techniques that can be employed to replenish a fortune teller’s karmic account, though that discussion may be beyond the scope of this one.

Divination is perhaps a safer practice of the art, because it works within set energetic limitations and under the supervision of higher, divine, or benevolent forces. Tarot divination is seeking counsel on the presumption that there are greater forces in the world than our physical senses perceive. Fortune telling reaches out energetically and affects those greater forces. Either way, I hope it is clear to the reader that I am not trying to assert gnostical maxims, but rather am merely explaining the rationale for my views.