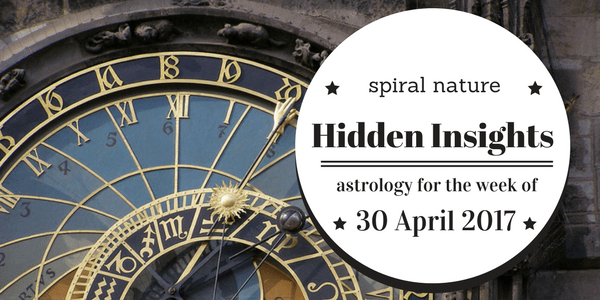 The white-hot fiery light of your personal truth yearns to express itself this week, as on 3 May 2017 we experience the return of Mercury’s direct motion in Aries as well as the first quarter moon in Leo.

But this isn’t just about a flash in the pan moment of revelation or interpersonal drama. As Mercury makes the shift direct, it’s conjunct the Promethean planet Uranus and forming a resonant trine aspect to consolidating Saturn in fellow fire sign Sagittarius.

Mercury takes weeks to build up to its usual fleet-footed speed so this is a transit that is reasonably long lasting. The extended interaction between these three planetary players indicates a powerful lesson is on offer around expressing your resolve to your ongoing creative liberation.

The first quarter moon in Leo occurs on the same day, with a dynamic sextile aspect to Mars in Gemini in play. And play is exactly what we’re reminded to do with this fire. If things get tense, get curious; these can be an elegant, amusing and energizing moments of divine grace if you’re able to stay clear of drama and blame games.

Lastly — and as if we didn’t have enough heat in the mix! — Venus is in Aries continuing to regain the ground she lost during the retrograde period.

Her lengthy embrace with the Wounded Healer Chiron is finally ending. But here at Hidden Insights, we suggest it’s wise to recall the compassion and sensitivity towards ourselves and others that this recent transit taught us, as we move through this week of increasing intensity towards next week’s transformative Full Moon in Scorpio.

You might be subconsciously looking for a fight this week, Aries. But before you jump to defend your corner you might want to ask yourself if it’s really necessary to do so. In fact you might come to realize that in some ways you’ve actually already taken things too far. If this is the case, remember that you absolutely have it in you to be the diplomat – as long as you remember it’s not about convincing anybody of anything.

Your sacred objects are a white flag and an olive branch.

Although the Sun is still in your sign, Taurus, connecting you with what lights up your soul, there’s still a lot going in the deep that’s ready to rise into conscious awareness. This may be an intimidating notion, but don’t let yourself default back to passivity and assume that you’ll be able to prevent this important evolution. You’re due for a wake up call about one of your deepest desires which is going to make itself immediately known to yourself and others – and it’s going to be amazing.

Your holy mantra is not the phrase “Ok, fine – whatever.”

A need for diplomacy in all areas of your life is indicated this week, dear Gemini, including within all key relationships. It’s not possible to entirely control how we come across to other people, but to a fairly large extent — it is. This is neither about manipulating nor deluding others, it’s about the simple truth that everything just flows so much more smoothly when you play the game as well as you know you can.

Your patronus is a master of non-verbal communication.

You might be feeling like it’s the most pertinent moment to make a break and ease any dissatisfaction you’re currently feeling, especially in regards to career, but it’s likely not quite the right moment just yet, Cancer. Some situation is drawing to its own natural conclusion, which will surprise you with unexpected results. But only if you can resist being pushed into an untimely reaction.

Your secret weapon is: Patience.

With so much fiery action in the heavens, it’s likely you’re feeling over-stimulated at the moment, Leo. This could be manifesting as agitation, anxiety or anger, but it’s actually just mismanaged creativity. It’s high time to tap that gold and make it into something real. Lean into fear and you’ll finally make headway on turning an abstract idea into something concrete.

Your sacred objects are yearning to exist in the physical realm (and only you can create them).

Ritual power is at your fingertips this week, Virgo. And you have an opportunity to fix something ingenious into your unconscious.  If you’ve been feeling the need to cultivate a radical new habit that leads to lasting deep change, then this is the right time to take a courageous step towards it.

Your holy mantra is a bold statement about exactly how you will be in the world from now on. Repeat it until it becomes your reality.

In order to get to a point of peace and harmony, sometimes we need the fire and brimstone. Not exactly your comfort zone, Libra. While it can be tempting to keep quiet in order to prevent a conflict, it’s the healthiest course of action to let yourself air your dissatisfactions, grievances or whatever it is that you’ve held onto for too long. Allow a little heat to rise. If you’re present enough, you might just find it’s possible not to burn yourself or anyone else in the process.

Your secret weapon is: Trust.

There’s something basic and straightforward — like an everyday ritual, for example — that if you adjust now will be a real game-changer for you, Scorpio. It will even help you actively begin to make some of your deepest desires come to fruition much more quickly. Don’t listen to any false confusion about what this might possibly be — you know exactly what it is. Now you just have to be game enough to throw caution to the wind and make the change.

Your holy mantra is: I’m ready.

It’s probably felt like quite some time since “home” meant anything stable, and nothing’s changing much in regards to that — except perhaps more acceptance about the chaotic nature of it all. If a shell-shocked root system has meant you’ve developed any kind of risk aversion tendencies towards decisions about where you hang your hat, then now’s the time to reintroduce a little gambling into the equation, Sagittarius. Luck is on your side.

Your patronus is an expert at taking a calculated risk.

An important revelation related to your grand plan has been making itself known to you. It’s not politely knocking on the door of your conscious mind. It’s a wildfire on the doorstep demanding immediate attention. Indecisiveness doesn’t suit you, Capricorn. So do whatever it is that you need to do in order to integrate your recent insights into everyday reality, and leave your past losses and victories behind you.

Your sacred objects are the ones that get the job done.

Something’s been holding you back from making your mark in the world, Aquarius. And you’ve got to be willing to talk about whatever it is that prevents you from making creative decisions before you’ll be able to make any headway. The channels of communication are wide open, but it’s up to you to make the first move. Expect signs and signals that confirm this notion to be assaulting you from now until you get the message.

What’s truly important, Pisces? This week holds an important key answer to this question (and it might not be what you thought it was). Part of this is also about opening yourself to reality as it currently stands, and admitting what has and hasn’t worked throughout the Mercury retrograde period over the last few weeks. It’s time to make sure your internal compass is aligned to your own true north before making any further movement ahead.

Your sacred sound is honesty.