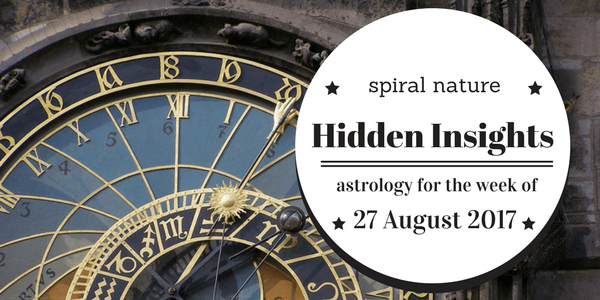 The excitement of last week’s solar eclipse is behind us, and the Sun has now entered demure Virgo. But several planets still have roles to play out on Leo’s stage. It’s the kind of drama where anything could happen. Hidden Insights has advice for a fateful week where we can expect exceptionally bold performances.

Triggering Mars conjoins the North Node at the beginning of week and soldiers towards the end of Leo. Mercury — in retrograde motion — re-enters Leo in late degrees from Virgo on Thursday, 31 August 2017. It grinds closer towards an intense conjunction Mars at 28 Leo — the now cosmically consecrated degree of the solar eclipse.

It’s also worth noting that the later degrees of Leo are highly prevalent in the natal chart of US President Donald Trump. With natal Mars (26 Leo) conjunct his Leo ascendant (at 29 degrees) he is the embodiment of this transit and especially sensitive to the current planetary weather.

This would usually be a fast transit, but with Mercury now slowing down in preparation for direct motion, this will ultimately be a three week long connection with our feisty, red neighbour. Eventually, they will both move together into the grounded and pragmatic Earth sign Virgo, but this week the action continues in expressive Leo.

The Mars-Mercury-north node conjunction is in wide trine (120 degree) aspects to both Uranus and Saturn, who occupy the two other fire signs — Aries and Sagittarius. Words (Mercury) that divide (Mars) and shock (Uranus). Or highly-inspired (Uranus) ideas (Mercury) and actions (Mars) that restore hope (Saturn in Sagittarius).

This powerful configuration could be constructive, if we find a way to channel our angst and elegantly bring our personal and collective revolutions into the real. As mentioned, Mars is triggering. We can certainly expect some form of combustion. And rather than artful diplomacy, it seems more likely that we’re treated to bombastic, dramatic displays of passion and temper.

Saturn in Sagittarius can present unshakable, dogmatic faith in a philosophy, or compound entrenched cynicism in anything perceived as foreign idea. Uranus is unpredictable and, when involved with Mars, potentially dangerous. Something like a proclamation of war is almost too obvious a manifestation.

Your sense of purpose or clarity regarding how best to express your creativity is likely under review at the moment, Aries. With the Sun’s entry into Virgo, and Mercury retrograde in Leo, you should be aware that any attempts to cut corners or skip steps is likely to end up with your current projects taking a lot longer than they might have otherwise. If you need to go back to go forward, then so be it!

Your sacred ritual requires a meticulous attention to detail.

When it comes to matters of personal security, you’re less easygoing and more willing to assert yourself than usual, Taurus. If you know exactly what’s bugging you and can find a way to communicate this effectively, then this can be a positive experience. If you’re not sure what’s making you uncomfortable and start striking out for the sake of it… well, it may not be as successful. Identify your cause before you begin your campaign.

This would be a great time to pick up a new hobby or explore an interest, Gemini. What I mean is that you should go beyond your curiosity and actually start manifesting in the physical world. It doesn’t have to be perfect, and you don’t have to throw your common sense out the window in order to chase a dream. The Sun’s transit through Virgo indicates you might not even have to leave the house.

Your sacred objects are anything you can use to make a vision a reality.

Don’t rely on subtle manipulation tactics or games to get what you want this week, Cancer. The Sun in Virgo, along with Mercury retrograde, reflect a need to refine your communication. It can be difficult to be completely direct — especially when talking about fairly abstract issues and even more especially when communicator planet Mercury isn’t following suit. You’ll need to be both creative and as open as possible about your agenda.

All this instability and flux is actually your golden opportunity to re-invent yourself, Leo. So what’ll it be? As difficult as it might be to see clearly into the future, it’s important that you stake your claim in it. If you’re feeling overwhelmed by the possibilities, then it’s time to get grounded. This is a good practice to get into before undertaking any task or attempting to make any decision. Breathe. Feel yourself in your body. And then move ahead with confidence.

Your patronus pays no mind to any fear of failure.

It’s all going to start getting a little more comfortable for you, Virgo. The Sun is back in your sign and will eventually be followed by many other allies. We’ll exit Leo season (never the most comfortable time for you) and enter a period where your Virgoan traits and gifts are prized. While we still have a spotlight on Leo, why don’t you get creative, and make a push to release yourself from anything that holds you back from boldly presenting your best earthy self?

Your secret weapon is: Your trust in your own abilities.

You’re likely to be pulled in separate directions this week, Libra. On the one hand, with so much emphasis in Leo you’ll be drawn to issues involving your chosen and inherited communities. On the other — with the shift into Virgo — you’ll be drawn inwards and encouraged to explore your own expansive depths with increased structure, focus, and determination. To be in two places at once, you’ll need to be both inventive and organized.

Your sacred tools are a meditation object and a planner.

Scorpio — If you’re not sure where to go next in your quest to connect more meaningfully with your tribe, then go deeper. This is not about holding yourself back, it’s about taking life at a dynamic pace. Part of this is Mercury retrograde asking “what’s the rush?”. Give yourself some time to get deeply connected to your primary motivations. Not only will be you be more effective in the world, but it will all mean so much more once you’ve strengthened these connections.

Your holy mantra is: Why?

Your ambition for worldly success is particularly strong now, Sagittarius. What leadership looks like varies from person to person, of course. But with so much emphasis in Leo and Virgo, it appears that for you there’s a drive towards reconciling your philosophies with the work you present to the world. Know this to be true: You absolutely have got it in you to bring your boldest vision to life and make your mark.

It’s the perfect time to explore any unrealistic expectations that you might have, Capricorn. Explore any disappointments delicately to test their importance. By doing this, you may even be able to resolve certain conflicts before they have any opportunity to take off. This is highly desirable. If you allow any of your reactions to find momentum, it will be much more of a challenge for you to get everything back in the box.

Your sacred ritual nips it in the bud.

The mind is a powerful tool, Aquarius. We can become convinced of our convictions, and adamant regarding our limitations. Obviously, getting stuck in one way of seeing things is not conducive to creative problem solving. With the shift into Virgo there’s a chance for you to analyze your situation pragmatically. Go gently, take your time, and release will come. It’s easy to overdo this type of self-reflection if you’re not careful, and end up feeling more trapped.

Your secret weapon is non-attachment.

The chance to express your sentiments freely may not be available to you now, Pisces. And a lack of outlet can potentially lead to some less-than-constructive emotional patterns as you attempt to release yourself from the pressure you’ve found yourself under recently. There aren’t any easy answers to this dilemma. However, acknowledging your position can do wonders and alleviate at least some of these tendencies.