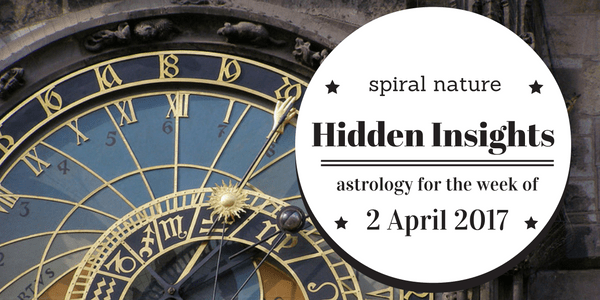 “Stirring the pot.” That’s the phrase that comes to mind at Hidden Insights when I think about the kind of energetic signature that April brings.

We are in fire season now. The Sun has been in Aries since 20 March 2017, and that alone can bring a sharp intensity to everyday life. Aries energy is a time of new beginnings, of taking action and summoning courage. But we must be careful that the abundance of fire energy doesn’t make us unnecessarily forceful, impatient, or aggressive.

Today, Sunday, 2 April 2017, Venus slips back into the sign of Pisces as she continues her retrograde motion. Venus retrograde began on Saturday, 4 March 2017, in the sign of Aries. The planet of love and beauty has been working through a sign that prioritizes independence, strength, and individuation. This Venus retrograde can cause many to re-evaluate their relationships, their sense of self-worth, and their personal values.

And now, with Venus slipping back into Pisces, a sign of transcendence, we can find ourselves having to now dig deep into our intuitive realms and really listen to our hearts about recent lessons around love and self-esteem. Venus retrograde will continue until 15 April 2017, so you might want to wait and see how the coming weeks play out before coming to any definitive conclusions about your next course of action.

This Thursday, 6 April 2017, Saturn retrograde begins. This retrograde will last until 25 August 2017. Saturn shows us where our lessons are. It’s where the work needs to be done — and it won’t be easy. There is a hard aspect with Venus square Saturn to all of this, meaning that the lessons that come up around this period will centre on work, money, and relationships. Themes that come up with Venus retrograde may still be underway long after Venus goes direct.

And on Sunday, 9 April 2017, Mercury retrograde begins. We’ll talk more about that with next week’s column.

For now, remember that I never believe it’s all doom and gloom across the board with astrology, because it isn’t. When we show up to do the work that the universe is asking from us, we often come out on the other side feeling freer, stronger, and clearer than before.

What needs to be shaken up, Aries? I have a feeling you’ve been getting some fierce inklings throughout the year that are pointing at some flaws in previously solid foundations. Are the cracks worth repairing, though? Sometimes we need to let our old structures collapse in order to build towards the new. Be careful that you’re not trapping yourself in something that may not be able to hold you much longer.

Your tarot card for the week: The Tower

How deep can you get, Taurus? I have the sense that you have an inner oracle that’s struggling to rise up from your murkiest waters. Be still. There is an important aspect of yourself — a deep need, an unacknowledged desire — that might not be so easy to ignore in the coming weeks. Don’t pull away from yourself now.

Your tarot card for the week: The High Priestess

Spring cleaning is just around the corner for you, Gemini — and I’m not talking about the dust bunnies behind the couch. In the coming weeks, I think you’ll have the opportunity to question some long-held beliefs that have been imposed upon you for far too long. Beware of outside opinions that you’ve adopted as your own. Your identity is yours to reclaim if you are willing to clear out the cobwebs.

Your tarot card for the week: The Fool

It’s head versus heart this week, Cancer. You might have already been feeling a strong push and pull throughout the past few months in deciding which to follow. This week brings a turning point in clarity, though it might feel a little too cerebral for your often heart-centred approach. Don’t feel the need to rush anything just yet. Sometimes intuition comes in the shape of hesitation.

Your tarot card for the week: The Hanged Man

When I think of you this week, Leo, the term “spiritual grit” comes to mind. What do you need to do to expand your cosmic connection right now? And what kind of magical, soulful aspects of yourself do you no longer want to hide behind? Reclaim your spiritual self, or step into your magic in a bigger, broader way in the weeks to come.

Your tarot card for the week: Judgement

What are you seeking right now, Virgo, and who can give it to you? There is something about the signature of the time you’re in that is making me think you could benefit from a mentor or guide of some kind. It doesn’t have to be within an official capacity: Friends and colleagues can serve as powerful teachers at the right time. So can books. Find your guide and the answers will follow.

Your tarot card for the week: The Hierophant

Who’s leaning on you these days, Libra? It can be hard to know how much support to offer sometimes, and how much to pull back when it feels too much for you. Pay attention to how your own needs are being met these days. Even if you’re in a position where you’re giving more than you’re getting at the moment, remember that you can be the one to give to yourself by staying aware of what you need most.

Your tarot card for the week: The Empress

Don’t miss out on the creative fire that’s available to you during Aries season. I get the sense that you are being given a short window of opportunity to channel a new kind of power these days. How do you want to better assert yourself? What new ambition might it be time to move towards? Do it while you can. This window won’t last forever.

Your tarot card for the week: The Devil

What are you leading, Sag? I’m not saying you need to start a movement – though you can if you want to — but I do think it’s time to consider whether the energy you are bringing into your relationships is right for you, and for those around you. If something feels off, old, stale, or tired, this is the time to look at what it might be time to change.

Your tarot card for the week: The Emperor

Oh Capricorn, your ruler, Saturn, is going retrograde this week. It feels like it was just yesterday since we last went through Saturn retrograde. Really, Saturn has been direct since August, 2016. I know, it still doesn’t seem like very long. But this the final karmic clear out for a while. Use it as a time to reap what you’ve sown: Take responsibility for past mistakes, reconcile any lingering regrets, and by all means celebrate the good stuff, too.

Your tarot card for the week: Temperance

No more BS, Aquarius. Usually, you’re so stoic, happily keeping the peace and treading carefully where you go. Forget all that, at least for a few days. What would it be like to really speak your mind? What would you do if you walked away from your most resented obligations? Lose the ambivalence and dare to imagine what your life might be like if you asserted yourself a little bit more.

Your tarot card for the week: The Lovers

Let’s be real: The level of intensity has been next level. But you know what? I think there’s some solid ground for you to grasp onto this month, Pisces. Just don’t hesitate to reach for it. What do you need most right now? What will make you feel solid and whole again? If it’s not right in front of you, make a promise to yourself to either find it or create it yourself.

Your tarot card for the week: The Star