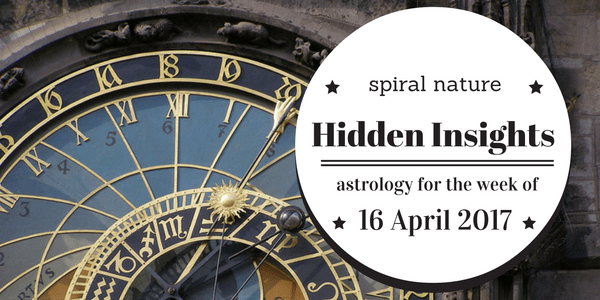 We know at Hidden Insights that this has been a pretty challenge transit for many people. Some are coming out of this period with some major lessons around love, relationships, and self-worth. Breakups, changes in the home, and jarring personal realizations have been common themes for many since March.

But with every shift like this, we come out with a better sense of direction, if we are willing to pay attention and listen to what the universe is asking of us.

The work, of course, is never over. While there can be room for a sigh of relief as Venus picks up speed again, Pluto goes retrograde on Thursday, 20 April 2017. And Mercury, Saturn, and Jupiter are still retrograde as well.

Pluto retrograde will end 28 September 2017. Pluto rules Scorpio. It’s the planet of death and rebirth. Its retrograde will push us to come to terms with any unfinished business. Anything that is holding back your progress can come to light in the months ahead, especially if it’s a self-sabotaging pattern or an unresolved aspect of the past.

The Sun also makes a move on 20 April 2017, shifting into the sign of Taurus. If you’ve been feeling on edge or pent up with the Aries energy this month, Taurus brings a welcome reprieve. It’s time to relax a little. Do some grounding exercises, make time for breaks throughout the day, and ease up on yourself.

Even though you’re in your own element at this time of year, this Aries energy can be a lot for you, too. You’re fiery enough as it is – you don’t really need the added flames. I think you’ll be one of the signs to benefit most from the Sun’s shift into Taurus this week. It’s been an intense year so far and Taurus can really help to ground you out without slowing things down too much. Rest up, Aries. You’ve earned it.

Suggested crystal for the week: Amethyst

Shine on, Taurus. Your ruler, Venus, is back in the groove after going direct this weekend and you can start to put things back into place. Sure, the puzzle pieces might fit a bit different on the other side of it all, but think of how good things will feel once it all starts to gel. Give yourself permission to feel good this week. Get back to yourself and the rest will follow.

Are you getting your point across, Gemini? Make sure your words aren’t getting buried when you’re dealing with others these days. But perhaps more importantly, make sure you’re not letting your own ideas get muddled before they even see the light of day. Your head might be feeling a bit foggy in the week ahead. Take care not to lose sight of your own priorities.

Suggested crystal for the week: Fluorite

Suggested crystal for the week: Calcite

What is one of your softer sides that others rarely see? I dare you to let it show through this week, Leo. Allow yourself a moment of vulnerability. Let your guard down. Be open in a way that scares you. Your soul will thank you for the act of emotional surrender.

Suggested crystal for the week: Chrysocolla

I feel like you might feel stuck between wanting to push yourself harder than usual, but you could also feel you lack the motivation to know where to start. The key to moving through any stuckage this week is to look at whether you’re actually making progress at all. If things are at a standstill, then starting anywhere will do. If things are happening and you’re being hard on yourself, ease up, breathe, and see where you’re at once Mercury is direct.

Suggested crystal for the week: Mookite

What have you learned about voicing your needs, Libra? Do you feel stronger about protecting your heart? Do you feel clearer about how to respond to the needs of those around you, too? In the coming days, I think you have the chance to learn something about yourself — and your ability to relate to the world around you — that can alter the way you interact with others.

Suggested crystal for the week: Sodalite

As your ruler goes retrograde this week, it will be a good time for you to start to look at any destructive influences that potentially block your path. What keeps dragging you down? Who or what do you continue to get sidelined by? Pluto is going to take you to task on it anyway, so you might as well get a head start while you can.

Suggested crystal for the week: Chrysoprase

You might not be able to mull things over much longer, Sagittarius. If you’ve been dragging your feet on a decision, the universe might come along and make it for you pretty soon. You know what you want. Sure, it might mean going through some big changes to get there, but won’t it be worth it in the end? Besides, it’s no fun feeling caught between the known world and one of infinite possibilities. Eventually, you will have to choose.

Suggested crystal for the week: Carnelian

Saturn retrograde can bring on waves of highs and lows. Don’t let it rock you too much if one day you feel unstoppable and the next you’re questioning your very existence. I see some cosmic support in the works for you this week, Capricorn. There is no reason for you to doubt yourself. Just keep moving.

Suggested crystal for the week: Hematite

Aquarius, if you sit still for a moment and think about whether you feel you are fulfilling your potential, what kind of answer do you get? If the answer is no, what do you need to do to change that? I think that in the days to come, you’re going to have some serious nudges from the universe to get some plans in place that will help you stay on track with your mission. It’s time to take charge.

Suggested crystal for the week: Pyrite

What are you dreaming up these days, Pisces? I suggest you pay extra close attention to the ideas that are coming your way right now. You’re entering into an incubation period. A seed is being planted within you. If you care for it, it can grow into something new and wild once the time is right.

Suggested crystal for the week: Cavinsite