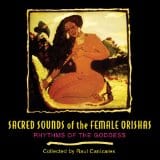 Raul Canizares, who collected and produced the recordings which are the basis for this CD was the head of the Santeria Temple Orisha Consciousness Movement in Manhattan, and the author of Cuban Santeria,1 as well as the producer of another CD , The Sacred Sounds of Santeria.2

The emphasis of this collection is the female aspects of divinity. It helps to know some of the stories associated with these strong female images, although it isn’t absolutely necessary. The liner notes give a little sense of the strength of these goddesses. There are no shrinking-violets in this collection. Even the orishas associated with love are strong, independent figures. Their songs convey this as well. The rhythms are forceful and compelling. You can feel their presence and power as their songs are sung.

This CD consists of nine tracks to separate orishas (the Santerian designation of Christian saints and divinities). A couple of these tracks might seem a bit surprising, such as “Warriors/Babalu” and “A Santa Barbara,” which are addressed to orisha who no one would mistake for female, but as the liner notes make very clear there is a reason for their inclusion.

The first song (which lasts nearly 13 minutes (nearly one quarter of the run of this CD) resulted from a desire to include the warrior companions of Eleggua (who is the “gatekeeper” of the rituals of Santeria) to ensure the success of a feast to the Mother Goddess. The inclusion of the second track referenced, “A Santa Barbara,” makes sense when you realize that many people so identify Shango (who is very much an archetypal macho-man) with Saint Barbara that they confuse the genders. Add to that the fact that Shango has been known to use cross-dressing as a way to accomplish his ends.

Those who are followers of the orishas will be transported back to ceremonies they have attended in the past. Several of the recordings were made in Cuba while the rest were produced in the US.

If you are interested in Afro-Cuban religions or music, this CD is one you will want to have in your collection.

Harmonic Origins of the World, by Richard Heath