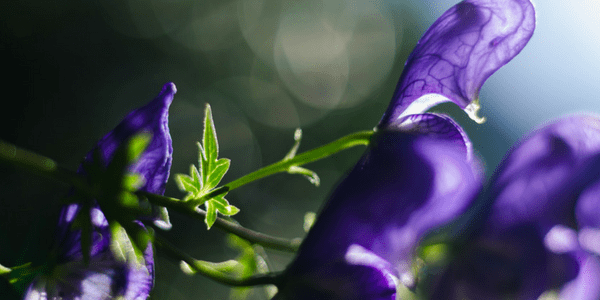 By Wolfsbane and Mandrake Root: The Shadow World Of Plants And Their Poisons

Poisons have historically been part of the witch’s arsenal. Yet to many modern practitioners, the idea of working with poisonous plants seems distasteful at the very least. Poisonous plants aren’t just dangers to be aware of, but powerful plant allies with lore and history all their own. In By Wolfsbane and Mandrake Root

, Mélusine Draco sets out to reintroduce poisonous plants into the arsenal of witches who have forgotten them.

The art of poisoning, however, goes back to the dawn of time when humans first discovered the Solanaceae genus of plants and learned of their great powers – and their dangers. Those who knew these secrets later became greatly feared and/or respected in their communities and the knowledge passed into the province of witchcraft and shamanism.1

Draco recounts much of the history of poisons in the western world, both magically and medically. In fact, just under half of this book is about the history of poisons and their intersections with witchcraft, and does a good job making the case for the inclusion of poisons in a modern practice. This section has some fascinating information, both on the historic use of the poisons, and on historical and cultural views regarding poison and witches. This includes some surprising and fascinating information; for example, despite the common link between poison and witchcraft, the witch trials of Europe almost never address poison.

After the history, the other half of By Wolfsbane and Mandrake Root is dedicated to an index of different poisonous plants. In these plant listings, Draco discusses the history of the poison, some of its biology, proper handling instructions, and of course, magical properties. What was lacking were descriptions of how to use a plant. For example, she might say a plant is good for redirecting a hex, but not explain how it is used to do so. As much as I like innovation and experimentation, I would have liked to know some historical methods of usage or even a personal experience of the author, and when dealing with a poisonous material the more information, the better. For example, in the entry for deadly nightshade (Atropa belladonna), after describing the myths and toxicological features of belladonna the reader is provided with “Magical propensities for inducing visions and aiding astral projection.”2 In an entry that suggests that deadly nightshade is good for inducing visions, I would have liked to see information on how to use it magically, as well as the mundane preparation of the poisonous plant — dosages, countermeasures if any, and information like that.

The last short section of the book contains techniques on how to handle different situations magically, though less than a dozen of plants are mentioned, leaving most of the plants in the book a bit of a mystery regarding how to use them. The examples provided were good, but more would have been appreciated. Draco covers making someone tell the truth, stopping someone’s actions, and retaliating against sexual assault. The spells included are quick and simple and offer a good glimpse into the use of plants, but again sadly very few of the plants discussed in this book have any sort of spell or ritual attached to them.

By Wolfsbane and Mandrake Root is a good book overall. My only real complaint is the length; at just over 80 pages, nothing really gets examined in depth. The level of detail in many of the plant descriptions isn’t really more than I would expect to find in someone’s personal Book of Shadows. If Draco had taken the space to include more, or even reduced the number of plants addressed but increased the depth of the entries, this book would be far better.

As it is, I would recommend it to someone who is curious about getting into plant or poison-based magick. As a small book, it is a good brief introduction to a subject before someone decides to commit further without overwhelming them. If they are already familiar with poison and plant magick, even on a rudimentary level, I would direct them to books like The Witching Herbs

by Harold Roth, or Veneficium

by Daniel Schulke, depending on their level of interest and skill.3

By Wolfsbane and Mandrake Root is a great introduction to poison and plant magick, so grab it if that’s what you’re looking for, but those already familiar with the subject should look elsewhere for more advanced information.