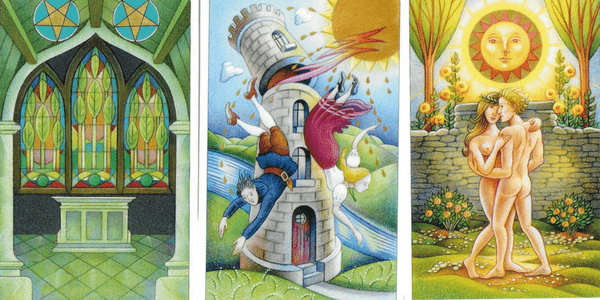 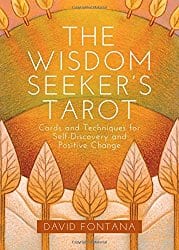 David Fontana writes, “Tarot cards are best used to aid general self-development and inner growth rather than as a tool for fortune telling.” This author’s note is written in small print on the copyright page of the booklet that accompanies The Wisdom Seeker’s Tarot. Upon reading the rest of the booklet and making use of the cards, it does appear that Fontana’s intent in creating this deck was to provide a tool for deep inner exploration rather than as an oracle for divination. That said, while there is no specific reason why one could not use this deck for divination, it may not be a deck well suited to tarot readers who are in the early stages of learning their craft.

David Fontana is a Jungian psychologist who had a strong interest in symbolism and parapsychology. He published many books on dreams, dream interpretation, and symbolism. It is his interest in symbolism that led to his study of the tarot and the meaning of the cards. This is a new edition of the deck originally published by Duncan Baird in 2008 as Understanding the Tarot.

The deck and 80-page booklet comes in a sturdy and beautifully illustrated box, with a pull-out drawer in which the cards and booklet nest. The cards are illustrated with bright images and include the standard 78 cards of a traditional tarot deck. They are slightly larger than common playing cards and shuffle easily with no sticking.

The 22 major arcana in The Wisdom Seeker’s Tarot are similar to the Rider-Waite-Smith deck and so, though the images themselves are more simplified, the symbolism will be familiar. The minor arcana differs from some common decks in a few ways. The numeric cards of the four suits of wands, cups, swords, and pentacles contain no human figures. They are instead illustrated with a variety of landscapes related to the meanings of the suit. The cards from the suit of cups are filled with flowing water, harbours and sailing ships; while the pentacles are filled with more earthy landscapes of forests, hills and soils. The suits of wands and swords do not have their more common correspondences with fire and air respectively; instead wands are associated with air and swords with fire. The court cards for each suit contain Princesses, Princes, Queens, and Kings.

The booklet begins with a short introduction and very brief history of the cards. It then goes on to cover using the cards as a tool for self-exploration and a few techniques for doing this. It devotes a full page to each of the cards of the major arcana. It presents the major arcana as the familiar “Fool’s Journey,” with each of us being the fool, and each card representing a character that we meet along the road of our journey to deeper self-exploration.

The card information includes the symbolism and common meaning of each major arcana card. Fontana recommends spending time, even days, studying each of the 22 cards in sequence so you may get to know them, and discover how you relate to them in your own journey. It closes each description with a question to ponder or meditate upon while working with a particular card. These questions would also make good journalling prompts.

Interestingly, the minor arcana cards are not grouped in the booklet by suit, but instead by number; all the aces, twos, three and on up are shown together on the page. Much attention is given to the meaning of each number while each card is given only a sentence or two on how that number ties into the suit. This leaves much of the card open to interpretation by the reader. The booklet devotes two pages to each card number.

A few spreads are offered for laying the cards out, including a Tree of Life and simplified Celtic Cross spread.  All are interpreted within the context of self-exploration and not divination. It discusses how the cards may fall simply due to random chance or utilizing Carl Jung’s idea of synchronicity.

As noted above, there really is no reason why one could not use The Wisdom Seeker’s Tarot as an oracular deck, if one has some tarot experience. The cards have fairly traditional symbolism and could be easily used in any of the many tarot spreads out there; and I did do just this. However, if you are new to tarot, this would not be a first choice as a solitary learning deck in that, while it gives fairly good instruction on how to use the tarot for personal discovery, it devotes no time to how to use it as form of divination.

I found the Wisdom Seeker’s Tarot pleasant to use and enjoyed exploring the landscapes of the minor arcana cards. I could easily picture using them as a meditation tool by imagining entering the landscape, a technique recommended in the book, and envisioning how I might venture through it. The symbolism in this deck is visually rich and thus lends itself readily to intuitive interpretation. For this reason, this deck may be a good one to teach tarot to students in a class format, though as mentioned above, it may not be the best for a new person to begin a solitary exploration of the tarot as a form of divination.

I would recommend The Wisdom Seeker’s Tarot to any experienced tarot reader, or for those seeking to use the tarot as a guide for deeper self-exploration.