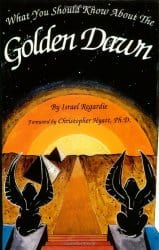 More than 70 years on, Israel Regardie‘s works remain a principal source of information regarding the Hermetic Order of the Golden Dawn. He believed that the Golden Dawn was “the sole depository of magical knowledge” and “the only Occult Order of any real worth.”1 While this may seem slightly exaggerated, it certainly was at the forefront of the scene at the time.

While Regardie may have believed in the order’s practical and mystical methods, he no longer believed the Golden Dawn was the ideal medium to transmit this knowledge. As others (primarily Aleister Crowley) had already disclosed some of it, he thought it prudent to reveal all its teachings to the public to ensure its preservation.

However much he believed in the order, he also offered some harsh criticisms against its chiefs, leaders, and members primarily in regards to grade-lust. Regardie touched on the order’s various complications and its complex history, believing that “[t]he root of the trouble, quite apart from the grade misconceptions as well as the curse of vanity, was of course that the work was only cursorily performed. No one really cared a fig for Magic and spiritual development. No one really strived for mastery of any technique. Grades, and grades alone, were the goal.”2 This may remain familiar to many currently practicing in various orders or groups. Unfortunately, no obvious solutions are forthcoming, at least not for ‘saving’ or ‘curing’ the order itself.

Regardie presents a more or less balanced view of his experience with the order, pointing out its faults, while continuing to revere its teachings. He received flack for the publication of this, and other Golden Dawn material, however he believed he was acting in accordance with the Work itself. Indeed, he rather boldly states: “If I am guilty of treachery and have mistakenly worked against the intent and purpose of the true occult forces behind the Golden Dawn…then willingly I open myself to the avenging punitive current…if my present act be contrary to the true intent of whatever divine powers may be, willingly let my “Rose be blasted and my power in Magic cease.”3 Evidently the powers that be did not take offence.

He gives an overview of the order’s grades and basic theory, as well as an outline of its syllabus. Further commentaries from other authors are tacked on to the end, as well as additional documents supporting Regardie’s claims.

It seems almost gossipy at times, however reservedly presented. The use of magical mottoes or their initials in lieu of mundane names may be a term of respect or to preserve member’s privacy, but it may seem difficult for those not already acquainted with the subjects to keep track of who’s who, and the fluctuation between mundane and motto may further flummox the reader.

What You Should Know About the Golden Dawn presents an interesting perspective and personal history of the Golden Dawn, and should prove a fascinating read for anyone considering joining or learning more about their teachings.