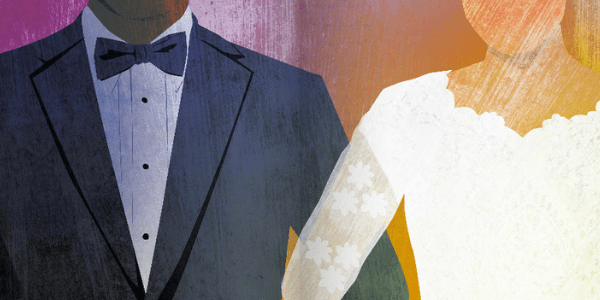 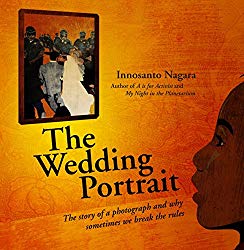 What better way to tell tales of radical protest and rebellion than with love as the foundation? Innosanto Nagara offers children an education in necessary defiance in his latest book The Wedding Portrait. Breaching the subject of disobeying authority is not usually characteristic of children’s books. Often, quite the opposite value of deferential obedience is the moral of the story. The Wedding Portrait provides children with an understanding of why it is occasionally ok to break the rules.

This is how Nagara begins the book as he delves into the importance of taking a stand against injustice. The 36-page book takes about 10 minutes to read aloud, and it is child’s guide to civil disobedience. The Wedding Portrait describes a variety of injustices that sparked protests, such as the Civil Rights movement, colonialism in India, and oil drilling on Indigenous lands. These situations are explained in a manner that makes them accessible to a child’s comprehension. In each situation, Nagara points out things changed because people had the courage to stand up against social injustice.

Nagara uses capitalized words such as “civil disobedience,” “blockade,” “sit-in,” and “boycott” to describe the strategies used to effect change. By teaching the history of civil disobedience, Nagara paints a picture of what it means to be an activist. He shows through the story that when people take action towards injustice a difference is made for the good of the collective. The power of the people rallying together, remaining focused to their mission and having the courage to challenge authority has the ability to bring about new resolutions. Solidarity — another emphasized word — is upheld!

I enjoy the way Nagara explains injustice in situations that have occurred in real life because it provides a sense of awareness for children and teaches rules of the past have not always been fair to everyone. Reading this story, one has a chance to pause and discuss the immensely important topics describes, such as Black Lives Matter and direction action taken by Bree Newsome to remove the Confederate Flag in the United States. It opens a window to have the difficult conversation about sensitive issues such as racism, capitalist oppression, environmental degradation and war. Nagara does not try to gloss-over the pain these rules caused certain populations. Rather, he invites children to look at rules from another person’s point of view, providing a glimpse of what it might feel like to be on the other side of a rule aimed towards oppression. The Wedding Portrait assist children in learning they have the ability to be change agents — capable of choosing a course of action to end acts of violence or oppression — and the duty to think about how the rules affect all people, not just the dominant few. I think many good talking points arise from the content of this book. This is by far my favourite quote of the book:

There are many different kinds of civil disobedience and direct action. There is the Sit-In, the Lockdown, the Sick-Out, the Slow-Down, the Work-to-Rule, the Strike, the Boycott, and the Blockade. You can be a War-Tax Resister, a Conscientious Objector, a Banner Dropper, a Tree Sitter, a Hunger Striker, a Plowsharer, or a Whistle-Blower.2

I love the way Nagara presents these options to children, informing them of the power of choice they have in their life. So often, I see children being groomed by adults to shut down their critical thinking, their sense of morality, and their wild spirits for the sake of conformity. I feel it is vital within a democracy to consistently question the practices seen and ensure everyone is being treated with dignity and respect. This book reminds children of the importance in working together and looking out for each other; people committed to their cause can make a difference, even if the face of oppression.

I also appreciate the realism of Nagara speaking about the consequences of fighting the establishment. The premise of the story is based around the arrest of him and his wife on their wedding day. (To be honest, I was so moved by their story of protesting nuclear weapons on the day of their wedding I cried the first time I read the book. The passion of both love and commitment to standing up for what one believes in provide for an inspirational story.) Nagara also writes about the arrest of other people who have sacrificed for the sake of their commitment to effect change, such as people in India making salt and Claudette Colvin not giving up her seat on a segregated bus. I feel it is valuable to teach children both the need to disobey at times, as well as the consequences of what happen when one does. Nagara shows in the long run, despite temporary clashes with authority, these actions do make a difference and rules are changed.

One thing worth noting, however, is the material in the book may be triggering for some children. In describing the horror of nuclear warfare, Nagara goes into detail about the death toll of the dropping of the nuclear bombs on Hiroshima and Nagasaki. It may invoke fear in children hearing about the deaths and sickness caused by radiation. The topics brought up in The Wedding Portrait are ones that require care and delicacy when discussing. I would caution one in reading this book to children if they are not ready to have serious conversations about inequality, injustice, violence and discrimination. I don’t think any of the issues described can be taken lightly. It takes a special person to give their children this knowledge and instill in them the belief that civil disobedience is at times required. This education is one that should come from the heart and one should be conscious of the maturity of the child to ensure they are in a space to be receptive of the information.

Overall, The Wedding Portrait is a fantastic children’s book for cultivating awareness of conscious civil disobedience. Nagara demonstrates for children how it is necessary to be participatory citizens and active in protesting injustice. Using the example of his wedding, Nagara shows it doesn’t have to be done in spite or with violence. Children learn a firm commitment to one’s beliefs, solidarity as a group, and the courage to take a stand is all that is needed to change the world. I highly recommend this book for those hoping to create a dialogue with their children about social topics, becoming change agents, and thinking for themselves when it comes to discerning if the rules are fair to everyone. There is a lot of teaching material in this book and it would be a fantastic classroom book as well.