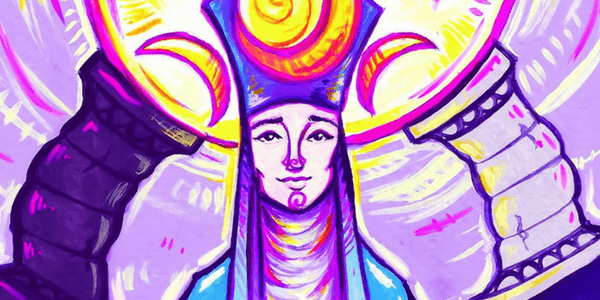 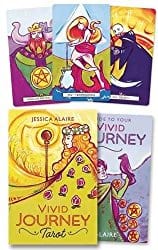 How many tarot readers have allowed their minds to ponder creating their own personal tarot deck? Artist and tarot aficionado Jessica Alaire didn’t just ponder the idea, but after exploring several decks and not finding one that she connected with, she set about designing her own. The result is the Vivid Journey Tarot and accompanying book, Guide to Your Vivid Journey.

The set comes in a sturdy, lidded box with a magnetic closure. The 192 page book is what you will see when you first open the box, with the cards nested neatly in an inset just beneath it. The inset also has a ribbon to make removing the cards easier should you decide to use it for storing the deck. The cards are of medium size, a bit larger than your standard playing cards. They are printed on a light cardstock that left me wondering how well the cards would stand up in the long term. I also found that the light weight of the cards made them a bit awkward to shuffle.

Every tarot deck designer brings their own vision to the cards, and the Vivid Journey Tarot is no different. While based on the symbolism of the Rider-Waite-Smith deck, Alaire uses her love of colour (and the meanings behind the colours she chose) as a focus for the deck. In the chapter, “Tarot Basics,” she includes a guide to the nine colours that dominate the deck’s bright illustrations.

The colour themes run throughout the deck. Each suit is associated with a specific colour: wands with red, cups with blue, swords with yellow, and pentacles with green. These colours are featured heavily in the images of each suit. At first glance, the illustrations can seem overly simplified, but each card contains the dominant elements of the symbolism of that card. This makes the deck a very good option for a beginner reader who is seeking to understand the basics of tarot. The images are striking and memorable.

The real gem of this set though is the accompanying book. Many of the guides that accompany tarot decks, even in the boxed sets, are little more than glorified booklets. There is usually a short guide on how to do a basic reading, maybe a paragraph or two on tarot history, and then a list of the cards with a few words on the meaning of each. Alaire’s book includes an introduction that shares the story of how the deck came to be. “Tarot Basics” covers the basic makeup of the deck, the colour symbolism behind it, some information on the meaning of certain numbers, and a guide to doing a basic three-card reading.

The card meanings are shared in two chapters, “The Major Arcana” and “The Minor Arcana,” that make up the bulk of the book. Unlike card explanations that offer only a few words, the book devotes two pages to each card. On the left is a full colour and full size image of the card. The card explanation covers the meanings behind the symbolism used in the card followed by the card’s upright and reversed meanings. The meanings are clearly explained, and often include questions that seem intended to aid you in diving a little more deeply into how the card may apply more specifically to a reading.  My only complaint about the book is that it is printed on glossy paper. While this makes the book visually pleasing if you are, as I am, someone who likes to underline or make notes in the book, the glossy paper makes this a little more difficult.

The deck is very fun to do readings with.  I found the addition of the colours added to the readings and could be a helpful aid for those just learning the deck. I did a reading using the book and found Alaire’s explanations and exploratory questions to be of great aid in understanding the traditional card meanings, as well as understanding her vision for the Vivid Journey Tarot.  The clear symbolism in the cards lends this deck to more intuitive styles of readings as well.

With its bright and clear illustrations, the Vivid Journey Tarot is an excellent deck for beginners. The accompanying book is a delight, and offers clear explanations of the cards and the artist’s vision for them. However, the cards could use a bit heavier card stock to ensure durability. Overall, it is a set that will be helpful to anyone seeking to explore the tarot more deeply, or a fun addition for those wanting to add something a little different to their tarot collection.