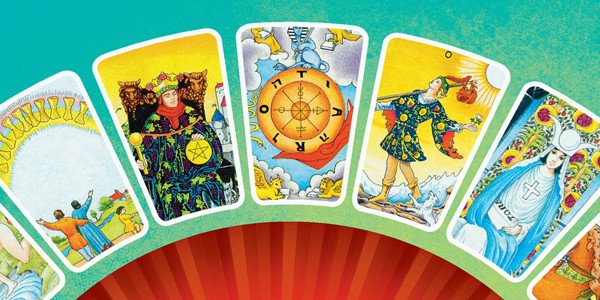 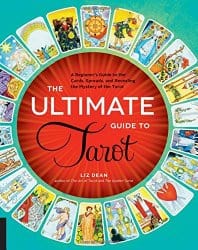 This book and I were fast friends. At the time I received it, I’d only just bought my first tarot deck a few weeks prior, and the only reference guide I’d had was the little booklet that came with the deck. In a of couple weeks, Liz Dean’s Ultimate Guide to Tarot proved itself to be a valuable resource, with descriptions of meanings for all 78 cards in the tarot and several different spreads. I have a feeling I’ll continue referring to this book in months, maybe even years, to come — it has both key takeaway-style information to suit a beginner and also takes a deeper look at the symbolism and history behind each card for more advanced readers to explore.

Using the Raider-Waite-Smith imagery to illustrate, the book goes through each card in the major and minor arcana and gives two to three pages of overview of the key meanings, including how the card links to astrology, kabbalah, numerology, and how the symbols present might be interpreted to tie into the card’s theme and a reading as a whole. The major arcana cards get more in-depth information than minors, and Dean also shares a spread for each major arcana card tied to a question around it’s theme. This is one of the main reasons I keep returning to the book.

Liz Dean‘s original-to-the-book spreads are creative and straightforwardly presented, each with a diagram to point out where to lay the cards and specific meaning for each in the context of the reading. The spreads are pretty diverse throughout the 22 cards. The Hermit’s is the most substantial, an 8-card spread called “the hourglass” which will show the querent their journey through the healing process from past events influencing current affairs to emotions and ambitions through to the outcome of the situation. Death’s two-card one is the simplest, “looking at transformation,” which shows the querent what’s to be released, and the outcome.

The spread I’ve found myself returning to out of all 22 is the Hanged Man’s, “an altered perspective.” This is, after all,  what I generally seek when I read for myself, and even a daily draw can do it for me sometimes, but Dean’s suggested spread covers all the basic areas I need to see a more whole picture —  the querent at present, what supports her emotionally, practically, an alternative view of the situation, and the outcome. Having this book on hand is especially handy in a reading like this, when I’m taking the time to consider what each card is bringing up for me and get a sense of how I personally relate to it, I don’t want to be looking up card definitions online. The slope to seeking too many other definitions can be slippery, especially at this early stage in my tarot knowledge.

Dean’s card descriptions speak to the reader in a consultative tone, helping one to draw connections between overarching card themes and the meaning in the querent’s life. She also shares fairly broad insights for each card when it shows up in the context of a home, relationship, or career and money reading. What I appreciate most about her writing are her meditations on the symbols in each card, which are very detail-oriented and prompt the reader to come up with their own personal interpretation.

One card I’d been initially struck by for its imagery is the Two of Swords. Dean’s interpretation helped me open up the card’s world of meaning. She writes, “the waxing moon we see on the top right of the card is in it’s growth phase and will change the shape throughout it’s cycle, just as our blindfolded woman goes through the process of decision-making, weighting alternative outcomes.”1 I tend to note the moon cycles, and am interested in how the moon’s energy is said to effect us and our activities, so now when this card comes up in a reading Dean’s point about the waxing moon and the similarities in the process of decision making comes to my mind.

Another detail in the Two of Swords that grabbed me: the woman’s “hair is parted so that the third eye, between the brows, is visible. Temporarily deprived of sight, she “sees” with her intuition.”2 The tiny symbols here gain so much more life of their own in Dean’s close description. Those who work with chakras, or in the case of the former symbol, recognize the Wheel of the Year, will likely be able to derive a world of personal meaning from the connections made here, regardless of how well they know the tarot system.

Dean, who has published six tarot and oracle decks, and books on tarot, reminds the reader that “anyone can learn to work with tarot and can benefit greatly can it’s insights; all you need is an open mind and a willingness to trust he impressions you sense during a reading.”3 Her attitude encourages me to get creative with the system and go ahead and use the suggested spreads here as “inspiration for devising (my) own spreads.” She writes, “the aim is to help you be creative with tarot, to experiment and find ways to read the cards that work for you.”4 Other beginners who are at all apprehensive about tarot or worried about “doing it wrong,” would benefit from using Dean’s work as a guide.

The Ultimate Guide to Tarot: A Beginner’s Guide to the Cards, Spreads, and Revealing the Mystery of the Tarot is an empowering guide to a pastime that can be transformative in one’s own understanding of the self. This book can be referred to over and over again, and it is as useful a companion to a tarot reader as it is visually appealing and enjoyable to flip through.