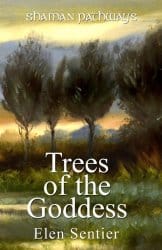 For millennia, trees have been held sacred among indigenous cultures and great civilisations alike. Tree mythology features in all major world religions.1 Trees speak deeply to our human collective unconscious, as symbols of otherworld connection, longevity, nourishment, and the mysteries of transformation.

To the ancient Celts, certain trees held special value as a magickal alphabet known as the ogham.2 Trees of the Goddess is a short book describing these sacred trees in the context of the mystical “Song of Amergin,” translated by Robert Graves in The White Goddess. While the ogham’s popular use as a calendar is loosely based on Graves’ work, his interpretation has been disputed (in true Pagan style) as a corruption of original sources.3

But Trees of the Goddess author Elen Sentier does not concern herself with such disputes — she simply offers her own system in the heartfelt voice of experience. “The ogham is an Early Medieval alphabet primarily used to write the Old Irish and the Brythonic languages, and let’s not open the can of worms that is the Norse ogham!” she quips.4

Sentier’s system varies slightly from Graves’ in that vine (Muin) becomes bramble, and reed (Ngetal) becomes guelder rose. In her blog,5 Sentier explains that this more aptly reflects the native trees of her locale. She underplays the variations by saying, “where I differ radically from most known traditions… I prefer to work with what I find by asking and journeying rather than the heady debates of scholars.”6

Separate sections for each tree include clear correspondences and highlighted keywords, with enough detail to invite multiple rereadings. The book is abundant with tree lore, goddess lore, and British folklore, with a sprinkling of pertinent facts, mythology, practical exercises, and anecdotes. Additional references Sentier draws on include Carl Jung,8 W. B. Yeats,9 and Sir James Frazer, author of The Golden Bough.10

Sentier writes with directness and warmth. In light of the extensive body of literature already dedicated to the ogham, some readers might be unimpressed by her no-nonsense approach. On the contrary, I found it informative and inspiring. Sentier’s concise descriptions make the meanings of the trees readily accessible, and memorable. She invites us to experience the trees for ourselves, knowing this is the best way to learn their power, stating “this book is about working with the trees and their spirits as a spirit-keeper rather than arguing academic history.”11

A slight drawback for me was the brevity of direction on making ogham staves, or as Sentier calls it, making “a spirit-house” for the spirit of the tree to inhabit. Ogham staves are traditionally used for divination.12 Sentier’s instruction in stave crafting begins with gentle scolding, “Be open!… Listen to what the tree spirit wants…don’t impose your ideas on it,” and ends with comfort, “Now get yourself something to eat and drink… you’ve worked hard.” Although I would have appreciated more detail about casting and reading the staves, I can’t fault Sentier’s charming delivery, or her rightful emphasis on intuitive “kenning,”13 “our knowing rather than our knowledge.”14

Trees of the Goddess is part of a series by Sentier on the British Shamanic tradition.15 People and trees with Celtic origins are far-flung across the globe, and this book has relevance regardless of where the reader lives, with particular appeal for witches, shamans, Wiccans, Druids, and Pagans.

Reading Trees of the Goddess is like sitting with your wise grandma (or the wise grandma you wish you had) in her kitchen, sharing secrets over an afternoon pot of tea. It is comfortable, fresh and sparkling, and ideal for beginners or as an ogham summary.