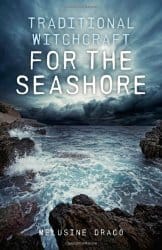 The majority of books I encounter on the subject of witchcraft and Wicca fall into one of two categories: they are written for rural witches, or for urban witches, as though those are the only two options. If you believe the stories of how things were in the “bad old days,” witches were seldom found in either of those two settings. They were most often found in the transitional (or “liminal”) areas – the last house in the village just before you entered the countryside, or the first house after such a point. They weren’t living in the wilds, but they weren’t comfortable in the daily to-do of the village centre either.

This book addresses another transitional space: the seashore. If you live on the coast, you are aware of that particular space between high- and low-tide: it isn’t always land and it isn’t always water, but it shares the characteristics of both. You know the effects the tides have on daily life (even though you probably are only concerned with the tides of the water not with atmospheric and terrestrial tides), as well as how they help to sculpt the environment in which you live. You are undoubtedly aware of the winds and their potential benefits and hazards.

Even if you don’t live on the seashore, even if you live in the middle of the country, it is possible to attune yourself to the environment where you live, and to become aware of things such as the prevailing winds, what types of clouds are commonplace, and so on. You can come to know the local variations which occur on a daily basis as well as the larger seasonal ones.

This is not a book for those who are new to witchcraft. In fact, even some folks who have spent years in the Craft may find themselves wondering what they have wandered into. Within the first dozen pages of the book I found myself exposed to ideas I hadn’t considered in years (even though I had been exposed to them in theory during my early involvement with the Craft).

It is possible to be a “sea witch” even if you don’t live near the coast – it’s a bit more difficult, but that simply makes it more of a challenge. Even an occasional visit to the seashore will help you to reconnect with the power which is inherent in that environment. Placing found “treasures” such as shells, driftwood, or sea-glass on your altar and around your home are all ways of honouring the source of all life on this planet.

Becoming aware of the smaller rhythms in life, as well as the larger seasonal observances, is all part of tuning into the forces of nature. The more aware we become as individuals the more likely we are to act responsibly as a society, and the more responsibly our society acts the longer our world will last. And that is definitely a good thing.

There are some correspondences listed, and some suggestions for the usefulness of some found items, but essentially this book is an attempt to open your eyes to much that is taken for granted today.

Standing on the seashore (or atop a hill) and gazing into the sunset should definitely rouse a sense of wonder in your heart, brain and emotions. This book will help you to recapture that sense of wonder.