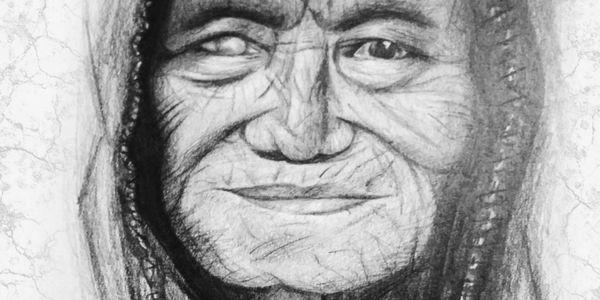 The Cailleach is a fascinating figure. She is, in many ways, one of the main creator deities in Irish mythology, but she is far less known than other beings from the same myths. It is appropriate that a goddess whose name can be translated as “veiled one” seems to be shrouded compared to the rest of the pantheon. I was very excited by the prospect of The Cailleach

— as someone with a connection with her, I know how hard it is to find information on her. Here was a book that could hopefully provide some answers.

In this book, Patterson tells us many variations of myths about the Cailleach, and then begins to widen the net, so to speak, and tells other myths that don’t mention the Cailleach by name but could be interpreted as being her in other guises. The core myths she included were good, no question about that, but there is a point with the connected myths where it feels like she’s reaching. For instance, there is a myth about a stone called “Old woman” which was considered sacred, and when someone moved the stone to use as a gate post, it had returned to its original spot the next morning1. That’s all the information there is in the myth, but Patterson assumes there is some connection based upon it being a stone, with a name that could describe the Cailleach. (Or any other hag or wise woman type, for that matter.)

Another issue with all the information Patterson includes is that she includes everything, including stuff of very dubious credibility, such as the strange assertion with no evidence that the Cailleach is a form of Kali.2 This claim has no basis in reality, and actively contradicts information we do have, such as the etymology of Cailleach, which has no connection to Kali. I haven’t seen any academic source for this; as far as I know, it’s only appeared in Pagan blogs and magazines.

It seems like, in order to hedge her bets about unsupported claims, Patterson often speaks in hypotheticals or vague sourcing. Regarding the Kali comment above “Some suggest that she was originally a Spanish princess named Beara and others that she originated from the Hindu mother goddess Kali, but some believe she travelled across the continent, who is right? (I don’t actually have an answer to that question.)”3 She doesn’t tell us the source of these claims or theories, but leaves it open on whether or not they should be believed. This pattern continues throughout the book — things are “assumed to be”, or “possibly”, and so on. She makes claims, but then makes vague comments about how she “had heard” it said, but not where or by who. If her book was a Wikipedia article (more on that later) her claims that “some suggest” would be constantly accompanied by [Who?] and [Citation Needed].

To be honest, the lack of sources in this book seems both appropriate and ironic. Twice during the book, Patterson relayed a myth that I needed to know more about, so I searched for it on the web because I didn’t know where she learned it, or was curious about a name or aspect of the myth. In both cases I think I found the sources of that information, and it looks like Patterson just plagiarized them both.

For example, here’s a passage on page 44 of Patterson’s book:

“Fintan mac Bochra known as Fintan the Wise was a seer who accompanied Noah’s granddaughter Cessair to Ireland before the deluge…He lived for 5500 years after the Deluge, becoming an advisor to the kings of Ireland.”

This passage also appears word-for-word on the Wikipedia article on Fintan mac Bochra:

“Fintan mac Bóchra (modern spelling: Fionntán), known as “the Wise”, was a seer who accompanied Noah’s granddaughter Cessair to Ireland before the deluge…He lived for 5500 years after the Deluge, becoming an advisor to the kings of Ireland.”

Again, on page 69 of The Cailleach:

“However, the Gyre Carling is also said to have been able to take the form of a beautiful Witch Queen of the Unseelie court of faeries. She was supposed to have been worshipped by the Scottish witches and 16th century witchcraft trial documents make reference to her, including the statement that she could be young or old at will. She is said to ride out every Halloween at the head of her spirit army or the Wild Hunt.”

The same passage, in a Patheos article by Christopher Scott Thompson written four years before this book came out. (I find this doubly sad, as Patterson also writes for Patheos.):

“In Lowland Scotland, the mix of Celtic, Norse and Saxon cultural influences led to the Cailleach being referred to as the Gyre Carling. “Gyre” comes from a Scandinavian word referring to a primal giantess much like the Cailleach, while “Carling” or “Carlin” is the Lowland Scots equivalent to the Gaelic word “Cailleach.” In Scottish folklore, it was always understood that the Lowland Gyre Carling and the Highland Cailleach were the same being.”

“However, the Lowland Scots also believed that the Gyre Carling could appear in the form of a beautiful witch queen or queen of the Unseelie Court of sinister fairies. This “Queen of Elphame” was supposed to be worshiped by the Scottish witches, and sixteenth century witchcraft trial documents make many references to her, including the statement that she could be young or old at will. According to Scottish folklore, she rides out every Hallowe’en at the head of her spirit army or Wild Hunt.”

I must admit that I was disappointed by this book in many ways. I was hoping for more information on the Cailleach and a good collection of myths about her, but instead there is just a very loose collection of myths that maybe, vaguely, possibly connect to the Cailleach. While I did learn some new terms and stories that I wanted to research farther, it’s troubling that in both cases I immediately came across a source that predates this book and has nearly the same content word-for-word. I only searched for those two terms and found two plagiarized sections. I can’t help but wonder what else I might find if I searched other lines from this book. I’ve never reviewed a book that was plagiarized before, and honestly don’t know what to say.

If you’re interested in the Cailleach, you might like this book for the information it contains, even if a lot of it is superfluous. That said, essentially everything in this book can be found online (sometimes verbatim) with a little bit of time and searching, and you’ll quite possibly end up finding and supporting the original author of the work.