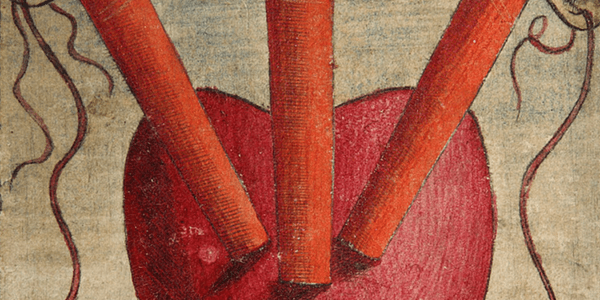 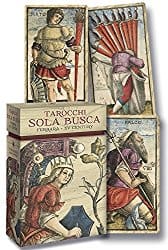 The 15th century Tarocchi Sola Busca is both familiar and baffling. I became interested in this deck when I discovered Pamela Colman Smith used it as inspiration for some of her minor arcana illustrations in the Rider-Waite-Smith (RWS) Tarot. Lo Scarabeo’s reproduction of the Italian Renaissance deck by an unknown (but probably Venetian) artist illuminates artistic connections and provides historical perspective. Yet, the unbalanced style may not sing to all readers.

As someone who started reading tarot with a RWS-style deck (I was gifted the Aquarian Tarot as a teenager), I found the Sola Busca’s Three of Swords strikingly beautiful because of its simplicity: a triple-pierced heart with sword tips ending in a half-wreath. It may be my favourite Three of Swords card of all the decks I now own, and the triple-pierced heart is the clearest connection to Smith’s art.

I was also struck by the similarities between the Sola Busca’s Queen of Cups, named Polisena in the deck and the anonymous RWS Queen of Cups. Three of the court figures in all suits (knights, queens, and kings) in addition to the major arcana all have names in the Sola Busca. I recommend checking out Mary K. Greer’s article on the source for Polisena.1

The Sola Busca’s named figures are specific embodiments of what later become more abstract Jungian archetypes. Both the court cards and the major arcana are populated with mythological and historical figures, with their referents up for debate. For Renaissance Italians, the references were probably clearer — decoding them in 2018 is a project similar to identifying Dante’s political enemies in the Inferno. The mystery behind some figures made working with the deck more intuitive than studied.

When I initially looked through the deck, a few major arcana cards were familiar. For instance, card VI, named Deo Taro, includes a figure in a chariot, which connects it to not only the Visconti, RWS, and Tarot de Marseille decks, but also to pre-existing traditions of Italian processional art, such as Petrarch’s Trionfi illustrations. The Sola Busca XX card, Nenbroto, has an exploded tower.

In my first self-reading with the Sola Busca, I encountered another familiar major arcana card — XXI, the Nebuchodenasor. I had specifically drawn and worked with card XXI, The World, from Scapini’s Shakespeare Tarot during a ritual previous to my Sola Busca reading so the reoccurrence held magical significance. Scapini uses a fairy maiden dancer in his World card, which is somewhat similar to Pamela Colman Smith’s world-dancer. The Sola Busca art does not include Scapini’s or Smith’s dancers, but instead features a dragon in the globe above Nebuchodenasor. The dragon-globe reminds me of the Visconti-Sforza XXI card with its castle in a globe upheld by cherubs.

Taken as a whole, the Sola Busca deck is more violent and “masculine” than many of its descendants. For example, XVII The Star includes a woman with an eight-pointed star in the Visconti, Marseille, and RWS decks (as well as post-RWS decks). However, the Sola Busca offers Ipeo for XVII: a white-bearded man with bat-like wings in monastic attire praying to a winged cherub head on a stake.

The occasional presence of Rubenesque women, such as on the Four of Cups, and more androydqynous figures, like on the Nine of Batons, is refreshing after seeing so many tarot decks with only extremely thin women. However, I longed for more women with varied body types because most of the Sola Busca cards focus on lumpy men and cherubs.

While there is a lack of balance in some of the deck’s aesthetics, the muted, limited colour pallet (mimicking the tempura paints available in the 15th century) is stunning. I especially love the purple of the wings with red ribbons on the Seven of Coins — I want to wear these purple wings! I also thought the memento mori imagery was very potent, such as the skeleton head and other bones on the Eight of Coins, whose darkness reminded me a bit of the Shadowscape Tarot‘s Eight of Pentacles’ spiderweb, bound to collect bones.

When I read for a friend, we appreciated the dark humour of the deck, such as uncomfortable images like a dog pooping in the Ten of Coins and underwear falling off the figure in the Six of Batons. The Sola Busca here raises questions of beauty and dignity: why do so many modern decks use sanitized imagery? Where can we find the balance between clean and slick (often computer-generated) art, and messy or discomforting art?

I definitely recommend this reproduction of the Sola Busca deck for its historical value and the insight it gives the reader into the evolution of the tarot as a deck with 78 numbered cards (Arabic on minors, Roman on majors) and illustrated pips. Lo Scarabeo’s limited edition cards are large and thick, which is not ideal for shuffling, but nonetheless, the cards feel like they will endure. The majors are generally less accessible than the minors and the aesthetics can be off-putting for some readers, but for my querent and me, the Tarocchi Sola Busca offered oracular illumination.