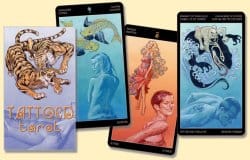 The Tattooed Tarot consists of 78 cards, with an additional cover card and advertisement for additional decks published by Lo Scarabeo. The cards are bordered in black, with the card name printed in six languages on the top and bottom edges. The reverse side depicts a mirror image of the two tigers found on the Five of Wands on a green and black design.

The tattoos of the trumps or major arcana of the deck take direct inspiration from the Tarot of Marseilles, with an additional emblem added to the illustration, usually in the upper right or left hand side of the card. For example, for the Fool the symbol is a feather, a broken pillar for Strength, and a globe for the World. Many also carry additional symbols in their hands, such as a rose for the Lovers, the Hermit depicts a man with a staff, and the Moon holds a lobster. The backgrounds for the trumps add a further dimension to the cards, such as the fairground shown in the Wheel of Fortune.

The tattoos for the Chalices are illustrated with water imagery such as dolphins, sharks and other fish; Pentacles depict more mythological and folklore with scarabs, dragons, and centaurs; Wands tend to be more primal with spiders, wolves and lions; and the Swords show more aggressive imagery, such as pirates, owls, and skulls. In general the elemental imagery in the minor arcana is strong; the tattoo for the Knight of Chalices depicts a man riding or wrestling a salamander in the ocean – a perfect image for a card which is elementally Fire of Water.

The cards of the minor arcana follow a pattern with the placement of tattoos on the body, for example, all Kings have Chinese ideograms on the back of their heads, Queens’ tattoos are on the nape of the deck, Knights on the right shoulder blade, and Knaves on the left. The images for the numbered cards appear lower on the body, for example, Fives depict their tattoos on the stomach.

The accompanying little white book contains brief notes on the symbols which appear in the cards, and one sample spread, called the Judge’s Diamond – it’s refreshing to see a layout other than the standard Celtic Cross presented.

With its modern yet lovely illustrations, the Tattooed Tarot would make an attractive addition to any collection.