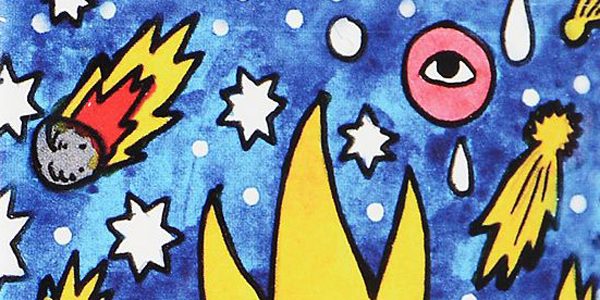 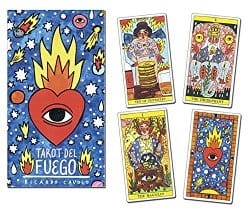 Tarot Del Fuego by Ricardo Cavolo is a unique deck featuring 78 fully illustrated cards. It is approachable for beginners, but experienced users will also find much to delight in.

This deck was surprisingly deep while still being easy to read. At first glance, the art seems very busy. Its style is influenced by Mexican folk art and classic tattoo work. Each card contains a good deal of imagery and lots of activity. Everything in this deck is on fire, there are no shadows, the art is very two-dimensional. It’s easy to see it as overwhelming until you sit down with them. The art can be quite graphic featuring some nudity, some visible blood, as well as open wounds. Everything is drawn in the same style so nothing is scary or gross, but it may not be every reader’s cup of tea.

Given more than just a glance, it is easy to see the basic meanings in these cards. The classic symbols found in most tarot decks are present, with an artistic twist. For example, on the Strength card, the image is of a young girl fighting a dragon or lizard instead of the classic lion, but it’s easy to draw the same conclusion. Throughout the deck, there are similar changes, which is common with unique or differently themed decks.

Although the art is busy, this deck has bold and specific symbols present. For example, the Empress features a pregnant figure and bees, both very clear symbols for fertility and feminine energy. Throughout the deck there are very overt images to convey meaning such as the pregnancy, mingled with more subtle images, like the bees. This makes it easier to read both broad and more nuanced meaning with each draw.

The accompanying little white book is not very informative. I have sinking suspicion that it is a standard pamphlet that is included with all of this company’s decks because there is no information specific to the Tarot Del Fuego. It contains some basic history of  the tarot and a keyword reference for each card. The sample spread included is just the basic Celtic Cross.

If you are a beginner looking at this as a first deck, then I suggest a strong fundamental book. I like Tarot: A New Handbook for the Apprentice, by Eileen Connolly. It is out of print, but easy to find online. The book provides a complete breakdown of each card while still leaving room for you to build your own interpretations, as suited to your deck. Although there are parts of the book I don’t necessarily agree with, overall it’s a good companion for any deck.

Due to the fact that there was little accompanying information with this deck, I did a few readings relying only my own skill set. I went into the first, which was a single card draw for a volunteer, thinking that I would only get the most basic of reads, and I was wrong. The layers of these cards peel away like an onion. Very obviously, the draw was indicating a focus on a new business, but each time I looked at the card, it was as if more information was popping from it. Almost as if the card itself was saying, “Consider this, consider this, consider this.”

Thus, I expected to be overwhelmed with information from a personal four card reading. I was totally surprised when the narrative of the draw was clear and to the point, with each card building seamlessly on the last, even though they were all from different suits and seemed unrelated. While doing this reading, I really started to notice the very subtle way that imagery was used to tie all the cards together, from the majors through the minors.

Both readings came easily and despite the stylistic approach, these cards stay true to the classic meanings. That said, they also work well if you are a reader who looks for deeper or alternate understandings.

Despite its busy appearance, this deck is a strong starter deck that is capable of growing with a reader over time. If you are already familiar with the tarot, then this deck is a good way to practice viewing deeper connections between cards.

Overall, Tarot Del Fuego is a solid tarot deck. Although the art may not be for everyone and can be a bit intimidating at first, sitting down with this deck leads to natural and easy reads. This deck is surprisingly intuitive and would likely work well for beginners or advanced readers.