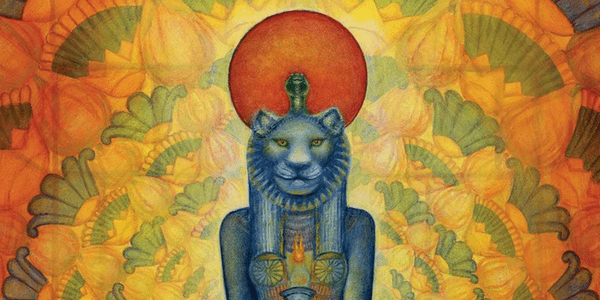 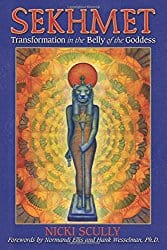 The Egyptian pantheon is one that has enchanted people for centuries. For many people, this is their first experience in working with gods and goddesses and although some may move onto other pantheons, others choose to stick with the popular gods and goddesses. Sekhmet: Transformation in the Belly of the Goddess by Nicki Scully is a guide to working with one of these powerful deities.

I didn’t know what to expect when I opened this book. Although Scully has written other guides and is a big name in the magical community due to her devotion to Egyptian gods, as well as the work she does, I had never read anything by her. I was expecting an informational book which talked about the goddess, her relationships and correspondences, but this was far from it.

This book can be best described as a guided meditation. A very long, guided meditation meant to take the reader on a journey to meet Sekhmet and receive her gifts (even if you can’t book a flight to Egypt anytime soon). This text is essentially one long ceremony broken up over the span of weeks or months.

Aside from the meditation, the only real practical work included in this manual is the instruction of a knot working that can be used to create the physical offering for Sekhmet, during your journey to meet her. The meditation itself happens in parts, and as the reader, you journey through various real-world locations that are overlaid with the spirit world in order to meet this powerful goddess.

The writing is very clear and easy to follow. Things were explained fully as you moved from step to step through the book. Barely anything is left up to the imagination, as Scully fully lays out what you are seeing, hearing, and feeling throughout the guide. On one hand, this is nice because there’s no moment of “What am I doing?” but on the other, I question whether or not I’m having an authentic moment, or one that is implanted by the text.

The text also includes other people’s experiences with their own journeys. These sections happen at the end of every chapter and are called “shared voices.” In them, past students of Scully speak on their own struggles and experiences with the goddess and the work. Again, I had mixed feelings about this. It was nice to read others’ experiences with this practice but at the same time, many of them came off as testimonials, as if they were attempting to sell me on the concept, which seems unnecessary as I already have the book.

I wouldn’t say that you have to know much about the Egyptian pantheon to engage with this practice — Scully doesn’t provide any sort of prerequisites other than that you are open to the journey of transformation. Other gods and goddesses are mentioned throughout the journey, but very little information is given on them. There is a glossary that explains words, phrases, and gives minor information on some of the different deities but this is at the end of the book. This isn’t a text for learning about these gods or for engaging them in a practice so much as it is very specifically one ritual in service to one goddess.

As with previous notes about this text, I have mixed feelings about this. For someone who is coming into Sekhmet with previous knowledge and history, this could be a powerful journey which moves them closer to their chosen goddess and themselves. On the other hand, for people who are not involved in this practice, I think there is a tendency to take the good and leave the work of worship behind.

Ultimately, I think it was a good book written by someone who has a great deal of passion in their work, and a connection to the Egyptian pantheon, on a deep spiritual level. Scully’s dedication and devotion was clear throughout the text. However, I wouldn’t recommend this book to someone who was not already involved in the practice of deity worship, as I think there would be a tendency to use this book as a sort of self-help guide.

Sekhmet: Transformation in the Belly of the Goddess is a well-written text that can guide those who are open to going on a life-changing journey, but I think that this text is very direct and simple and I would have liked to see more information outside of the ritual itself. Still, I do think this is a solid read and it would make an excellent addition to any library where Egyptian deities are honoured.