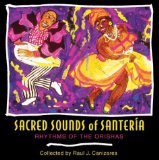 Sacred Sounds of Santeria: Rhythms of the Orishas

This CD is a reissue of a previously issued cassette tape. It is not likely to appeal to a large audience, since it consists of songs to the orisha of Santeria (or Lucumi as it is sometimes called). There are no translations provided.

The liner notes provide a bit of background and recommendations from a Cuban high priest on who could benefit from each of the songs included in this collection.

For those who have an interest in this faith, who have never actually attended a ceremony, these songs and rhythms can begin to give a feeling for the energies involved. For those who are occasional participants in the ceremonies, these recordings can serve as a reminder between attendances.

Because these songs were recorded in Cuba, and are primarily in the language of the orisha (various African-derived dialects), they can be used as a meditation tool without distracting the conscious mind by easily understood lyrics. One can allow the sounds and rhythms to carry one along.

One word of warning may be appropriate with reference to these songs. They are designed to invoke the orisha, so they may “ride” their followers. The orisha expect to possess their followers, and even when they don’t do so, the power of their presence may be unsettling (and/or overwhelming) if you are not used to it.

This disk is a welcome addition to an all-too-small group of readily available recordings of “traditional” or “indigenous” music. There is a need to preserve these songs and rhythms, and the technology available today should make this easier to accomplish. Field recordings offer a better feel for the culture they come from.

Mr. Canizares has added a few non-Lucumi songs, also recorded in the field. These are from faiths which are related to Lucumi, and share the same sense of power. There is an instance of a song in Spanish (after all, Cubans do speak Spanish in their daily lives), but most of the songs are untranslatable to the average listener.

The CD is enjoyable on several levels – as an example of Afro-Cuban music, as a sampling of the power and majesty of Afro-Cuban religious expressions, and as background when reading material relating to the Lucumi faith (such as Mr. Canizare’s excellent Cuban Santeria). While it isn’t for everyone, it can certainly by an eye-opening experience if you allow it to be.