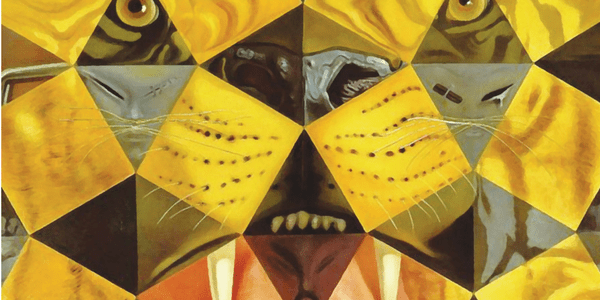 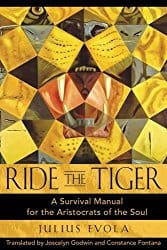 Ride the Tiger: A Survival Manual for the Aristocrats of the Soul, by Julius Evola, translated by Joscelyn Godwin and Constance Fontana
Inner Traditions, 978-0892811250, 242 pp., English translation by Inner Traditions International 2003, reprinted 2016

Every time a reviewer requests a book, she is taking a chance on an unknown quantity. The author or subject may not be a familiar one, the writing style may not be to her liking, or she simply may get lost while reading the majority of the book. All of these things were true for me when I read Ride the Tiger. Yet, as I thought of how to write this review on a book whose entirety I couldn’t grasp, I suddenly realized that my process seemed to mirror what I understood Julius Evola to be saying in it about modern life: That in a world that makes no sense, one can still make some inner meaning by adhering to certain specific timeless principles, which he terms “Tradition.”

I understand from one of Spiral Nature’s editors that Evola is a rather well-known and respected author in Thelema, an area of the occult that I’ve never studied, let alone heard of before discussing this book with them. So let me say at the outset that I’m approaching this review as simply a discussion of the traditional areas of review: structure, language, level of difficulty for the average reader. If you practice Thelema, know something about it, or know of Evola, you may find merit in Ride the Tiger that I simply can’t see. I cannot in all honesty say that it would or would not be worth your time and effort to read it. Please let your interests and instincts be your guides.

Evola writes that the purpose of the book is to explain how the present age (circa 1961, when it was first published, but easily extended to the 21st century) is one of “dissolution,” and to discuss “what kind of conduct and what form of existence are appropriate under the circumstances for a particular human type.” This type has nothing to do with the modern, common world, but can find its place in the world of Tradition, “ruled by principles that transcend what is merely human and individual, and when all its sectors are formed and ordered from above, and directed to what is above.”1

He goes on to explore this concept in eight parts: Orientations, In the World Where God is Dead, The Dead End of Existentialism, Dissolution of the Individual, Dissolution of Consciousness and Relativism, The Realm of Art –From “Physical” Music to the Drug Regime, Dissolution in the Social Realm, and finally, The Spiritual Problem.

Of all these sections, Orientations, a preface to the rest of the book, is the easiest to understand, written relatively straightforwardly, so Evola’s own insights are easiest to see. In the remaining parts he relies heavily on references to European philosophers and critical literary thought of the early and mid-20th century to make his points; if the reader is not familiar with them it is difficult to follow along. As I moved into these sections I wondered how many college philosophy reading lists Ride the Tiger might be found on.

In addition, Evola’s own writing style is rather dense. It is clear he was a highly educated man writing for a highly educated and literate audience. All of this might be off-putting for some readers, yet it can also be viewed as an opportunity to read this book slowly and with great care, doing the necessary research on references, taking time to deeply understand each part of it. If you have the time and the will to do it, that type of immersive reading often has unexpected rewards.

That Ride the Tiger was reprinted in English last year, 55 years after its first printing in Italian, is impressive and attests to its continued value as esoteric literature. You just can’t argue with that kind of staying power.