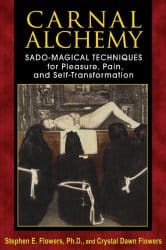 Dawn and Flowers clearly state that ‘this book is not intended as a “training manual” for dominants, but rather a commentary from a magical perspective on various methods common in Sadean sexuality,’1 and in this it certainly fulfils its role.

They detail a rational approach to self-exploration, noting that “breaking the tabus of society is one thing, but in breaking internal tabus great storehouses of magical power are to be found.”2 Stating that “the way to increase or give rise to sexual energy is simply to generate it in ways the individual finds most pleasurable and appealing.”3 From a practical point of view, the main thing about sex magick is that it works on the basis of sexual energy or arousal. Always coming back to the understanding that “the higher the level of arousal or excitement, the more sexual energy the magician will have to work with.”4

In Carnal Alchemy two forms of magick are recognized: that which affects the objective universe (through the subjective interpretations of others); and that which affects the subjective universe, one’s personal mental, emotional and physical state of being. The roles of the dominant and submissive parties are explained comprehensively, with the former being best suited for objective, and the latter for subjective magical workings.

A general history of sex magick is outlined, from its ancient Pagan roots to modern practices, with special significance given to what the authors term “sado-magic” and “sado-shamanism.” Also briefly detailed is the creation of a chamber or dungeon, as well as the inclusion of popular furniture and toys.

The authors constantly remind the reader that sexual magick is a form of physical knowledge, and that it must be experienced in the flesh and “made physical, or carnal in order for it to be impressed on you soul and spirit.”5