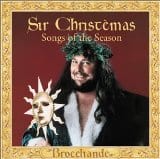 It comes as no surprise that this, the first of the four CD set “Songs of the Season” is comprised of music appropriate for the winter season. After all, we do start our New Year during that season.

Broceliande is a Celtic and Medieval Quartet. Being Pagan they bring a sense of balance to a season which tends to be dominated by overly familiar little ditties. The odds are you won’t have heard the majority of these songs very often. Of the 16 songs on this CD only three were familiar enough for me to say that I knew them. They cover seven centuries of music, from the 13th through the 20th. I really enjoyed listen to all of them.

There was a lot of “new” music here… at least in the sense of unfamiliar. It amazed me how many sources they tapped for their inspiration. There were songs with Spanish, Middle English, and French lyrics to tease your ears and get you to pay attention.

I was very impressed by the sound of this quartet. I am grateful to Flowinglass Music for making this series of albums available.