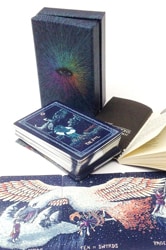 There have been a number of gorgeous self-published decks coming out in recent years, and the Prisma Visions Tarot ranks high amongst them. It comes packaged in a sturdy flip-top box, with 79 silver gilt-edged cards, and a small booklet outlining the deck’s symbolism and use.

This is James R. Eads’ second tarot deck, following the Light Visions Tarot, which was produced in a limited edition of 500 copies, and has since sold out. Unlike his previous deck, the Prisma Visions Tarot is full colour, and is slated to be available indefinitely.

The trump cards of the Prisma Visions Tarot are bordered, but for the four suits, each card carries on from the next, creating a panoramic landscape for each suit. The cards have an impressionist feel, and the backgrounds are predominantly dark blue, and give the impression that the scenes take place at night, with the exception of the dusky oranges and yellows of the Pentacles.

Much of the Golden Dawn astrological and elemental symbolism is also preserved, such as Ares in the Emperor, Taurus in the Hierophant, and the watery feel of the Hanged Man, though some cards offer departures, such as the alchemical solar imagery in the Empress.

Many of the cards retain a Rider-Waite-Smith feel to their imagery or contain allusions to it, particularly in the suit cards, such as with the Two and Three of Pentacles, and others go off on their own imagistic journeys, like the Five of Wands and Three of Chalices. The Three of Swords is particularly innovative. In the Sola Busca and the Rider-Waite-Smith Tarot, the Three of Swords depicts a heart pierced by three swords. Here in the Prisma Visions Tarot, we have a hart slain by three swords. It’s a wonderfully evocative parallel.

Other cards depict new scenes, such as the Lovers as dancers at a masquerade, and the Chariot as a muscle car. Rather than hanging from a gibbet, Eads’ Hanged Man hangs in the ocean, piranhas circling his floating corpse. The psychedelic flowers in the Sun card drip colour, pooling at its base. In the World, images from earlier cards circle and coalesce: the lion of Strength, the peacock of the Wheel, and the piranhas of the Hanged Man all in a swirl, at the centre, the prismatic eye of the storm.

Justice here is more violent than is often depicted, and seems to be of the eye-for-an-eye type. Here, a serpent is biting or striking a disembodied hand, drawing blood, meanwhile, that hand reaches up towards the dagger that has rent the serpent in two. Who struck first? Is there justice in this mutual destruction? It’s an interesting card to meditate on.

A new card is added, Strawberries, unnumbered. It can be left in the deck, or removed, as the reader deems fit. It represents the “jubilant and powerful” energy, and rushes towards any conduit that can manifest it. Strawberries here represent a facet of life anointed with raw power. These berries pack a strong punch.

The continuous cartomantic panorama of the minors each tell a unique story within their suit: the Magic of Wands, the Ballad of Chalices, the Song of Wands, and the Rise of Pentacles. Each also has its own elemental and seasonal correspondence, with the spring scenes and fiery passions of Wands, the Chalices as intuitive summer waters, the afflicting wintry winds of the Swords, and the summer bounty of the earthy Pentacles. Though from the colours and the imagery, I would have guessed Chalices for summer rather than fall, and the Pentacles, with its fruit trees and harvest scenes, for fall rather than summer, though the strawberries in the Pentacle court cards might have been a tip off.

The card descriptions given in the accompanying booklet suggest most figures are men, but often the figures seem to me to be women or entirely gender neutral — particularly the abstract figures, and in a reading they could easily stand for anyone.

The booklet depicts three possible divinatory spreads to try out, including the Vision, a three card spread with three different interpretations for the positions offered, as well as a five card spread, and the ever-present Celtic Cross.

The cards are solid and well made, and as I was shuffling for a reading, the strawberries card emerged as a jumper, which seems fitting given the energy the card describes. The reading itself was interesting, though not as in depth or specific as I was hoping. This could be entirely my fault, as I spent more time admiring the images than interpreting them. I’ll need to play with these cards more to get a better feel for what they’re like, and what kinds of readings they’d best be suited for. For now, for me, a better use might be meditating on the scenes the cards depict, both in the panorama of the suits, with the colours and imagery in the trumps.

There’s a lot to explore in the Prisma Visions Tarot, and deck collectors will want to snap it up while it’s still in its first edition.