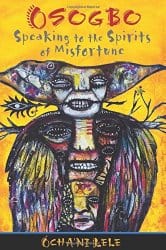 I loved Osogbo. I don’t say that often, or lightly; to earn such praise a book has to open up a whole new world for me, to change my point of view, to teach me something I can use daily. This is such a book.

Ócha’ni Lele is a master storyteller, and he has rich material to work with: the oral traditions of the Lucumí religion of western Africa. He opens the book with the story of the twin brothers Iré, blessings, and Osogbo, misfortune, and how Osogbo came to be dominant in our world. Never before have I read an explanation of their relationship so elegant — in the sense that mathematicians use the word, sensible and beautiful in its simplicity. I won’t recount it here; everyone reading this review should experience it through Lele’s words.

I requested this book because of late I’d been dealing with misfortune of my own and thought it might suggest some useful ways to cope. To my Western-trained mind, misfortune is never good, and we need to keep away from it; blessings are what we always ask for.

Believers in Lucumí, however, see it differently — not that they go asking for misfortune, either. They see misfortune as a catalyst to growth, responsible for strengthening us and egging us on to great achievements, necessary for human evolution, decreed by the divine. When it comes — as it always does, since it is more common than blessing — they make ebó, or give offerings, to the osogbo to entice it to leave. Lele explains that Osogbo is both a concept (spelled with an upper-case “O”) and one of 16 embodied spirits of misfortune (spelled with a lower-case “o”). In contrast, there is only one spirit of blessing, Iré.

This was my first exposure to the practices and beliefs of Lucumí, also known (derogatorily, as Lele points out) as Santeria. I could not have asked for a more expert guide than this author. He frames the book within his goddaughter’s experience with ovarian cancer, and divides it into two parts. The first is a primer on Lucumí divination techniques, through which priests speak to their orishas, or patron spirits, for guidance on dealing with misfortune, followed by a discussion of each of the 16 osogbos. The second half is a collection of patakis, or teaching tales, about some of the stronger osogbos, like death and war.

That Lele used so many Lucumí words without in-line explanation is part of what I greatly liked about the book. It was like being plopped down in a foreign country where nothing was familiar, an experience both confounding and exhilarating. From page one, he immerses the reader in the culture, lore and language of his religion. I was greatly confused during the first couple of chapters (until I thought to check for a glossary), yet I felt that I was there, in that world, a traveller through a fascinating land of embodied spirits that freely interact with humankind. The book is written for practitioners and priests of Lucumí so Lele assumes a certain level of knowledge, yet through his storyteller’s ashé, or gift, he’s made the book just as accessible to newbies like me.

Lele explains how the osogbos fit into the complex Lucumí divination system called the diloggún, in which priests use cowrie shells and other objects to receive guidance from the orishas on how to avoid and fight the spirits of misfortune. I would have welcomed a picture or drawing of these objects or depiction of one of the diloggún spreads Lele describes; then again, since the book is written for people who already have this knowledge, perhaps illustration was thought unnecessary.

Amid the unfamiliar territory I encountered while reading Osogbo, there was one constant I recognized instantly: the ubiquitous  indigenous belief in balance as the source of human health and happiness. Lele writes:

When a human being lives in balance with both nature and individual destiny she lives with iré—what in Western terms is called “good.” When she is out of balance with nature or her destiny, she lives with osogbo—what Western thinking calls “evil.” Still, Lucumí initiates do not spend much time concerning themselves with evil; instead, they try to go to the root of the cause, which is osogbo itself.

Going to the root of the cause is the defining practice of all ancient spirituality and medicine. That Lucumí breaks down misfortune into 16 spiritual causes, to pinpoint the root, speaks of a highly developed and effective medicine. It is an intelligence derived from a close association with nature; that is the source of the religion’s elegance.

Lele’s mastery and skill in Lucumí traditions is never in question. His compassion, evident in the afterword where he tells the reader his goddaughter’s fate, brought tears to my eyes. When misfortune visits your house and you wonder why, you may find enlightenment and comfort in the pages of his book. You will, if nothing else, find a great teacher.