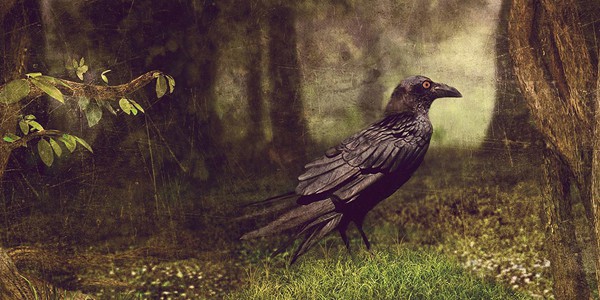 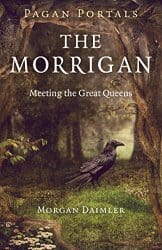 With the publication of The Morrigan: Meeting the Great Queens, part of the Pagan Portals series by Moon Books, Morgan Daimler has written a thorough and extensively researched book on the great Irish goddess of battle, the Morrigan. An important deity still held in reverence by many, her story can be difficult to unravel, as she is a mysterious and complex character. This book is then a welcome introduction, backed up by historical material balanced with personal insights. The author has provided a resource for readers to explore the Morrigan as lightly or deeply as they wish, without bias to any particular spiritual path. This book is a little like the Tardis of Doctor Who, small on the outside but immense on the inside.

Who is the Morrigan then? Morgan Daimler emphasizes the challenges facing anyone seeking this deity due to the contradictory nature of the historical material available and the etymology of her name, which is disputed. The etymological meaning of the first part of her name changes with positioning of the accent mark (called a fada in Irish), which changes it from Mor to Mór. The meanings attributed to this part of the name have varied, including “nightmare,” “sea queen,” and “queen of the dead or slain.” The second part of the name, rígan or rigan, means “queen” or “noble lady.” The context in which this name is used provides useful clues to her identity and role, whether as a name, noun, or title. This is because the Morrigan exists as a sole entity as well as a triplicity consisting of her sisters Macha, Badb and the Morrigu herself — known as the Three Morrignae. Further, various goddesses — such as Fea and Nemain — have also had the title of the Morrigan attributed to them, as have other supernatural beings.

As for structure of The Morrigan, the book has been divided into seven chapters covering a genealogy and history of the Morrigu as goddess of battle, Macha as goddess of sovereignty, Badb as goddess of prophecy, other goddess attributed with the name, animals associated with the goddess, the Morrigan in mythology, and the Morrigan in the modern world. Morgan Daimler has taken a balanced attitude and let the reader make up their own mind about how to best approach the Goddess, either as devotee, interested academic, or curiosity seeker. The reader is able to consider all the evidence laid before them in each chapter and follow up references by consulting the bibliography. To that end, Daimler has recommended a variety of texts to suit different tastes, ranging from older sources such as The Ancient Irish Goddess of War by W. M. Hennessey (1870) to modern texts like The Mythology of the British Islands by Charles Squire (2000) and Celtic Lore & Spellcraft of the Dark Goddess by Stephanie Woodfield (2011). In view of the subject matter, it is a sensible and thoughtful approach to take: no sense in patronizing the readership. There is no pressure on the reader to interpret complex material straight away, as this book is meant to be a basic introduction to the goddess Morrigan. Additionally, the historical sources cited provide an understanding of the society that nurtured the worship of the Morrigan, as it allows us to reconstruct the tenets and rituals of her worship in the modern world. We are permitted an insight into the nature of the deity and thus enrich our relationship with her. Obviously nothing is ever set in stone and the author expresses this sentiment eloquently:

I do not think ultimately the framework we choose to use for our religion matters as much as that we make the effort to honour the old Gods and bring their worship into the modern one in ways that respect their history.1

Additionally, she has included poems, invocations, and her personal insights on the goddess at the end of each chapter, drawing upon her experiences as a priestess of the goddess Macha, as the author’s spiritual path is Irish reconstructionist polytheism. In the end, the attention is drawn back to the personal level, which is where we connect with the deity.

The notion of a goddess of battle may present some difficulties to the modern mind: it seems we still find the spectacle of female warriors — whether in the armed forces or engaged in guerrilla warfare — an uncomfortable sight. Is it because this offends our cultural sensibilities? Warfare in ancient Ireland involved small groups of people in cattle raids, one to one combat, and matched armies. War to them was a mixture of “glory and horror, […] carnage, […] noble beauty, […] plundering, the sense of fatal destiny, the noise, the fury.”2 Thinking in modern terms, these are sentiments which may not sit comfortably with many people who do not have direct experience of warfare, or may not agree with it. The Morrigan presents a real paradox to us in the 21st century: a potent female harbinger of fear and death glimpsed in the heart of the battle. Many ancient cultures venerated strong female deities and entities, such as Kali, Sekhmet, Cerridwen, and the Valkyries. Perhaps we should not forget this, and celebrate the goddess being honoured in this book alongside them. These issues are elaborated further in the book and worth contemplating.

What of the other members of the Morrignae triplicity, Macha and Badb? Their histories are as extensive as the Morrigan, so a brief outline will have to suffice. Macha is the goddess of sovereignty, her name being connected to crows, cattle, pastures, and fields. In Old Irish her name means royston crow (hooded crow), and in modern Irish, cattle field or yard. Macha also manifests as a goddess of battle and warriors, death, battle magick, Druidry, and prophecy. Badb is the goddess of prophecy, and her name used either as name or title. The meaning of “Badb” is rather hard to define; some authorities link it to bodro (crow), others to buduo (battle), or bheadh (stab or crow). One of the forms taken by Badb is the scald crow (hooded crow) or caróg liath in Irish.

The Morrigan mythology is complex, beautiful and shrouded in mystery. I knew little about it before reading The Morrigan: Meeting the Great Queens, but it has been a positive learning experience. Morgan Daimler writes for a general audience, rather than only to Pagans  practicing in a specific tradition, and this is laudable. In order to understand the deities we worship, they need to be placed in context within a society and time period, and any historical research material available to us should be utilized to enhance our knowledge. Coming from the viewpoint of a reconstructionist working in the ancient Egyptian tradition, I applaud what the author has done. Daimler has ensured that her goddess still has a place in the 21st century.