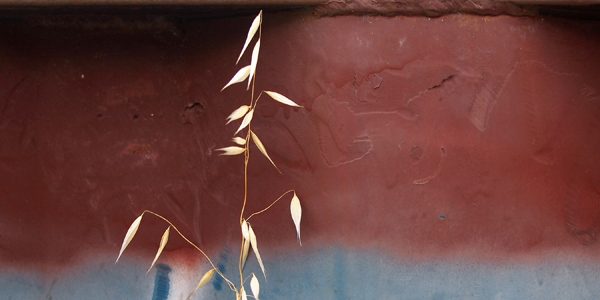 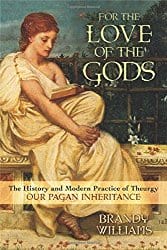 The worship of many gods is fairly common in Pagan communities and is widely considered a sort of reclaiming of past traditions. For the Love of the Gods by Brandy Williams dives into the rich history of theurgy and pulls apart the lessons we can learn from the past, above and beyond feast days and offerings.

Theurgy as defined in this book is the “gods’ work,” which can mean the work that we do for and with the gods, or the work the gods do for us. The book covers a great deal of history and practices; so this very malleable definition is presented in different ways throughout the text.

I picked up this book expecting it to be a sort of lesson or work book that used examples from history to guide its teachings. I was both correct and very wrong about that. Williams uses storytelling to create a rich tapestry and bring to life worlds that have long since fallen to dust. A large chunk of this book is just history, but it’s not told as history.

Williams approaches the historical figures that she covers, such as Plato, as characters in a story. She crafts their history as sort of fable, connecting each figure to the one that preceded them as she traces the history of worship and magick. The text brings these people to life, mixing just a hint of creative license to the tales to flesh out the world. For example, she writes that that Plato returned from Egypt, cutting his lessons short, because his mother was dying. There’s no record of his reasons for leaving Egypt, but that little bit of storytelling makes him human and alive to the reader.

The thing I really appreciated about this text is that it doesn’t pull any punches, so to speak. When it discussed  historical figures, it discussed them in their totality, including the good and the bad. The text spoke of the sexism that existed during their times, or whether or not they owned other people as slaves. Williams didn’t stop there though, she spoke out against the way academics have studied these figures as well.

One of the most surprising things about this book was that Williams spoke plainly and often against the Eurocentric view of theurgy. She talks about the racism that leads people to discount or whitewash Kemet’s (Egypt’s) role in modern theurgy practice,1 as well as the ways women are often removed from the narrative. This was such a refreshing take, as many texts just gloss over the fact that much of what we know — and don’t know — is because of the racist and sexist biases of early academics and clergy, and there is so much history that is only now being rediscovered.

Later there are sections that actually deal more hands-on with the worship of gods, Williams addresses gendered language and cis-normative practices, and offers alternatives that allow continuing worship of gods while making it more inclusive to nonbinary people. For example, by focusing on the aspect of certain gods as “all” and ungendered beings. Williams does not have all the answers for these issues, but she does offer the start of a conversation that draws attention to the fact that it is an issue.

This book has an interesting set up. Each chapter focuses on a teacher, tells their story in a narrative fashion, and then gives a summary of what you are to take from that story. For example, the lesson that we learn from the chapter on Geber is that information has been preserved and shared in a variety of ways, and that we can find it by searching in other cultures, as well as our own.

The bulk of this book is a series of narratives, almost like fables. The end of the book, about the last 25 percent, is more of a workbook; Williams gathers up all of the various teachings and organizes them for easy reading and reference, which she calls “lessons from the teachers.”

After this, there are specific practices that people can partake in to improve their own worship. Things like, how to make offerings, what to wear, and so on, are located here. I thought that this would be the bulk of the book, but this “how-to” information is relatively short, lasting only two chapters.

Even so, I think that this was a powerful read for people who are looking to learn more about the worship of gods from a general standpoint. The text gives a wide variety of information of regarding the historic practices of magick and worship.

Williams’ language is easy to read and follow, and although it’s a lot of history, it doesn’t feel like it and the chapters really fly by. I found myself highlighting and sharing passages of this book with my own witch groups while I was reading it.

Although For the Love of the Gods: The History and Modern Practice of Theurgy is not a how-to book and it does not provide specific information on how to worship specific gods, I think as a general book on Pagan theurgy and practice, it is a powerful and eye-opening read suitable for people who are just beginning their journey or those who have been at it for years.