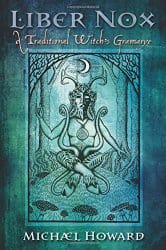 Liber Nox is subtitled “A Traditional Witch’s Gramarye” in order to distinguish it from various forms of Wicca and contemporary Paganism, and to emphasize that it’s not in those traditions, but dealing with something older.

The book covers what one might expect from a basic text of witchcraft: the deities, the tools, initiation, circle casting, and the Wheel of the Year. In this regard it’s a good book, and if you need another guide to the Wheel of the Year and the mythology and rituals behind it, or the tools of the craft, then Liber Nox can get you started.

Unfortunately as good as the book may be in that sense, it does have a few failing — some by its own design, and in general. The organization of the book is quite poor. While the information might be good, the organization reminds me more of a rambling conversation with a friend, filled with caveats and digressions, rather than a text trying to explain something. It’s not uncommon for Howard to be talking about one thing, make a side point, go into details about a fact off of the side point, and suddenly you’ve jumped from the organization of a coven to which stones are associated with a certain god. This wouldn’t be a problem if it happened once or twice, but it is so frequent that it disrupts the text, and those side points would have worked much better as their own small section worked into the whole.

The book focuses on the Wheel of the Year and spends one section of the book discussing the mythology of the holiday, and then in another section discusses the rituals for them. It seemed staggered to have the book divided and repeated in that way. The organizational issues of the book make it one that will have to be read more than once to really make use of it, not because of a depth of material, but due to the scattered nature of the information.

Another problem with the text is lack of citations, sadly common in a lot of magical texts. Various interesting points are made, or questionable claims, and there is no citation for verification. When Howard claims, for instance, that witch hunters used instruments with retractable points to “stab” a witch to prove she couldn’t be hurt1 there isn’t a way to look into those claims.

There are also a few claims that are questionable, or poorly supported. For instance, Howard claims that the assertion that the Wheel of the Year is a modern invention is wrong,2 and goes on to provide a variety of examples of the holidays being celebrated. Unfortunately, he was unable to find a single culture that celebrated the Wheel, and had to pick examples centuries apart from all across Europe in order to complete the Wheel.

Lastly, there is the issue of the content as a whole. If you want a book on the Wheel of the Year, with rituals, interesting research and stories behind the days, and what tools a witch needs, then this book is a good choice. However, though Howard claimed to be representing the Old Craft as something different from contemporary Paganism and Wicca, the reader will be hard pressed to find something in this book that isn’t in a Wicca or Paganism 101 book. The holidays, the myths, the rituals, are all things found in abundance in a variety of sources, and it’s hard to tell what differentiates his presentation of the Old Craft from more contemporary approaches. Howard says that Gardner’s Wicca was his version of witchcraft meant to be acceptable to the public, as the traditional craft wouldn’t be accepted, and that he “had to sanitise it, removing, ignoring or repressing those darker elements of the old witch ways that he knew the modern age would reject.”3 Yet this form of the Old Craft seems to be sanitized in the same way. In fact a few times in the book Howard mentions that animal sacrifice was part of the older traditions, but that it’s cruel and wrong and not done now. This is the same sanitization criticism levelled against Gardner.

If you’re looking for an introduction into witchcraft and the Wheel of the Year, Liber Nox is a great primer to get started.