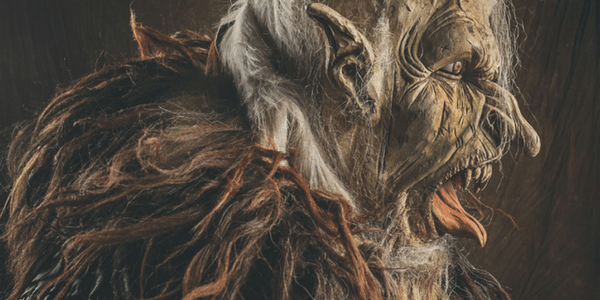 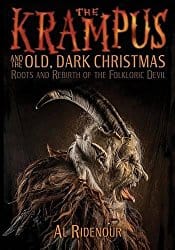 From the mountains of Bavaria comes a tall, dark figure. He’s covered in fur with an ashen face; a dull persistent clanking of bells echoing his footsteps. Chains wrapped clear around his throat, his hand holds a thick switch meant for children who do not behave and say their prayers. This is the figure of the Krampus. He is the folk figure who accompanies Saint Nicholas on his rounds in the middle of winter to bestow blessings and give warning to ill-mannered and lazy inhabitants. This mysterious creature is brought to life in Al Ridenour’s The Krampus and the Old, Dark Christmas: Roots and Rebirth of the Folkloric Devil.

Spanning thousands of miles, this book takes the reader on a journey of discovery not only in distance, but in time. A time when the shade of Christmas held a darker connection to the earth. When creatures of unknown origin walked along saints, ladies of light, and child popes. This book will take you places many have not ventured.

Al Ridenour has done an exceptional job at researching and arranging this work. His attention to detail with stories, pronunciation, and social interactions are well-articulated and woven together in seamless fashion. From Germany to Italy, his words are followed by pictures from each tradition, which brings more nuance to the reader. In the front of the book is a map enumerating all the discussed locations to better understand the cultural relationships. He begins with the Krampus, then ventures down a winding, dark road to Knecht Ruprecht (“Servant Ruprecht”), Père Fouette (“Father Whip”), and the Rempler (a choreographed fight between the Krampus). Into the dark winter night, the road goes on through the Alps, the snows, past the Devil’s Cross, and through Carinthia, Austria, and skirts the ancient witchcraft site at Mt. Schlern in Italy. The sites of masked figures and the jingle of bells are never far away.

The word “Krampus” comes from the Middle German Kralle meaning “claw.” From here, Ridenour stamps our linguistic passport as we travel from country to county, village to town — a lexicon as a guide for when encountering a new tradition. The book builds understanding, juxtaposing social mechanisms and constructs next to established reference. By the time the reader arrives at Saint Ulrich am Pillersee, the term “Perchten” (small impish figures) is understood and added to the Swiss “Stopfer” (literally meaning “spikes” — poles perchten jump from one to another), making one feel included in the discovery. It’s a wonderful journey indeed.

For hundreds of years the Krampus and his ilk have been a reminder of moral consequence — reminding children to say their prayers and to act within societal boundaries, admonishing lazy housewives to complete their labours, and even, in the background, providing a guidance towards mature behaviour.

How they do it is up for debate in the book as Ridenour questions the necessity in scaring the begeezus out of children. He writes, “Europeans seem a fairly civilized lot. So, how can they, we Americans ask, expose their children to the horrors of the Krampus.”1 Later on he asks the same question and if it is, in fact, “harmful to children.” His question is thankfully answered with testimonials from adults and children, carefully balanced to provide a fair answer allowing the reader to decide for themselves.

Just like folktales which have been passed down from generation to generation, some stories of the Krampus origins and customs have been lost to time. The interaction with the changing of the seasons, the impact of technology and the altering of tradition is noted by the shifting dates of a Wolfaulassen ritual — brought forth as Saint Martin’s day (which retains the slaughter of livestock). The book cites this as a reference to an earlier custom related to animal husbandry and the coming of winter.

Ridenour continues to highlight the evolution of folk customs. The influence of the Catholic Church (and at one point the Lutheran church), for example, is clear in the renaming of figures, moral demands, and holidays. The trouble Ridenour runs into is the difference between a folk tradition and Pagan worship. When folk traditions are performed, as the book notes, they are done so for good fortune and a prosperous harvest; sweeping away all the past negative forces from one’s life and domain. Yet, how they got there has been lost in antiquity.

An example can be found in the Yoruban tradition of the goddess, Oya. She is the goddess of the dead who guards the cemetery and the winds. In my tradition, her offerings are eggplant, her number is nine, and her celebration date is 2 February. Over the years, her birthday became Candlemas, in the Catholic tradition, eggplant fritters became her offering (or nine eggplants on a white plate). If several generations from now, when someone dies and nine eggplants are left on the dining room table on a white plate with no explanation, is that a folk tradition or a Pagan worship?

Another instance is the tradition of giving a coin along with a knife, or throwing change in a new car, for good luck. The origins of both are obscure, yet remain a tradition.

The Krampus and the Old, Dark Christmas is an excellent book. It brought me into a forgotten world full of lessons, teachings, and darkness. Its place in consciousness is one that we must go to when darkness fills the world. I highly recommend this book in order to embrace the full scope of the traditions recounted of the Krampus. There’s so much insight into how humans work when left to their own devices — the shaping of fear and values, of culture and discipline, are underpinnings of ritual both understood and unremembered. It’s worth a look into the abyss if only to see another perspective.