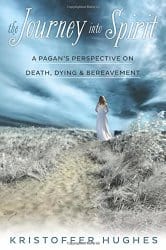 What a gift this book is. From the lyrical quality of Kristoffer Hughes’ writing, not often present in nonfiction, to the sensitive and thoughtful wisdom he imparts, The Journey into Spirit gives the reader a compassionate space to rethink beliefs about death.

Hughes is both a Druid priest and a professional pathology technologist who has worked in British morgues for the past quarter-century, and a funeral celebrant and a teacher of death customs and philosophy. He tells us how as a young child watching his first mortuary scene on TV he knew he was destined for a life entwined with death. Although the adults around him at that time were scared and taken aback by his interest, he felt no fear, only a deep respect for the physical process of death and curiosity about the ensuing spiritual transition. This is the perspective he’s carried throughout his life, and from which he has written this book.

He frames his views within the three Celtic realms of existence — the realm of necessity, the realm of spirit and the realm of infinity – and discusses his philosophical conclusions and certain Celtic teachings pertinent to each realm. The discourse is far from dry, especially because he intersperses the death experiences of six souls dear to him between the other chapters. It’s very clear that all his training, both professional and spiritual, does not exempt Hughes from the very human grieving we all experience when a loved one passes.

I can’t overstate how much and how poignantly Hughes’ sensitivity comes through the words he has written, often amidst great pain at the memories he encounters as he writes. Sometimes, he tells us, he doesn’t want to write the words – and he struggles with telling us even that. It is a struggle every writer knows. Yet, the experience of a loved one’s death is always an experience of being stripped bare, when raw emotion cannot be stopped. When Hughes decides to share his pain honestly with us, he does his greatest service to us as a chronicler and teacher.

One of the salient points of the book is that it is natural and necessary to grieve, for however long it takes and in whatever form it shows up. He writes that so often the bereaved negate or hide their grief, thinking it is commendable to be stoic. Yet this is to deny the healing power of grief, which he likens to the seasons of the year, loosely, based on his observations of the grief-stricken and the cycles of the natural world. For a Pagan, it’s not a far stretch and seems eminently logical.

Hughes suggests using ritual to “emotionally relocate” our beloved dead. The customary religious funeral is a ritual, yet somewhat removed, he says, from celebrating the particular life of the deceased. He offers a more personalized ritual based on a pentagram, each point representing an element. The bereaved names qualities of the deceased represented by that element as the ritual moves along the points, finally culminating in the point representing spirit.

Rituals and meditations such as this one, written specifically for Pagans, are sprinkled throughout The Journey into Spirit, and is one of the qualities that make the book especially useful. By its very nature, Paganism does not come with an “instruction book” such as the Bible or a long history of death rites and traditions universally practiced (unless one happens to be a hereditary witch with traditions handed down through family history). Similar to Starhawk’s The Pagan Book of Living and Dying, Hughes offers a framework for ushering the beloved dead into the afterlife. The last section, Rituals and Practices, covers every stage — deathbed vigil, death rites, preparing the body for burial, a funeral for a Druid, and rituals for Samhain.

The Journey into Spirit contains so much more than I’ve been able to review in this short space – and in fact, I don’t want to give too much away. It’s a book worthy of time set aside to enjoy Hughes’ beautiful writing, to ponder his points, to practice the meditations and rituals if you’ve recently lost (or are losing) a loved one. Like the natural death process itself, it cannot be rushed.

And Hughes’ final point, the greatest purpose of death, is not to rush life away either – to savour every moment and be satisfied, when death comes, that it was truly after having lived.