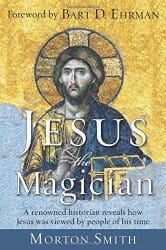 The historical existence of Jesus has long been debated with varying degrees of bias on any side of the argument. The problem in the quest for the existence of Jesus is not so much if he existed, but who and what he was if he did live: sorcerer, fraud, divinity in flesh, healer, prophet? Unfortunately the sources we have detailing his life are almost exclusively Christian, making it harder to sort out the real man due to the fact that Christian sources would want to push a certain image of Jesus, so things might be shifted, added, or deleted from his life.

This is where Morton Smith comes in with this classic book reprinted after more than 35 years, for he attempts to analyze the Biblical and Christian sources, as well as the few non-Christian sources in order to parse out who Jesus was, and how he was understood at the time.

This book does an excellent job of appealing to both “scholarship and literate laity,”1 both in structure and content. The breakdown of the book is clearly outlined so you can see how Smith will tackle the subject in a way that makes the text flow seamlessly, starting with the details of Jesus’ life, his miracles and magick as outlined in the gospels and in Jewish and Pagan sources, moving into what it means to be a magician and comparing that term between Biblical and non-Biblical sources.

A central point of Smith’s work, as evidenced by the title, is the idea that Jesus would have been considered a magician at the time by the common person, and that the separation of religious miracle and magick was something emphasized later in order to distinguish Jesus from others. Most people in any magical community will be familiar with this (non)division, but for the secular or Christian audience, it’s a point worth exploring. To illustrate these similarities Smith looks at the miracles attributed to Jesus, and then looks at magical texts (such as the Greek Magical Papyri) and other hagiographies (such as The Life of Apollonius) to show how the same themes, the same expressions, and the same miracles show up across these sources. Healing, exorcisms, controlling the weather, talking with and raising the dead — all of these are attributed to Jesus, but also to any competent magician of his era, and Smith shows how this plays out in the depiction of Jesus in his life and after.

As someone with a degree in history, I really appreciate the structure of the book, and Smith’s use of cui bono, though he didn’t describe it as such. In history (or any form of textual or data analysis) one should always ask cui bono (who benefits?) regarding the data we have. The majority of information on Jesus comes from the gospels and New Testament texts, books that we know have been censored and edited in order to create a certain image of Jesus: The Christ, son of god. These texts have to be critically pulled apart, and Smith does an excellent job looking at the gospels and stories in it, and asking cui bono?

Look at the gospels and question what stories don’t seem quite “right.” They could be stories that seem unusual, or don’t paint Jesus in a flattering light, or are problematic, and then ask, why are they there? If the statement or story survived the early authorship and editing there has to be a reason. Take Jesus’ comment about “A prophet is not without honour, except in his home town,” his answer to why he couldn’t perform miracles in his own village. If you were writing a text to show him as a divine saviour and miracle worker, you wouldn’t mention any failures on his behalf, but if that story remains, there must be a reason, and Smith looks at who benefits from the inclusion, and many others.

The book is excellent overall, but not without problematic points. One is the assumption of non-Christian sources. For instance quotes very similar to Jesus appear in magical texts before and soon after his life, and Smith concludes that Jesus must have been familiar with these texts and their traditions, and thus his use of the phrases is a derivative of that source. It could be just as likely that Jesus (or his tradition) created the phrase that was later included in the magical texts, or that both Jesus and those texts were inspired by an earlier common source, or Jesus never said it but one of the authors or editors included it because it seemed profound or as a way to include or subvert a non-Christian tradition.

Another challenge was Smith’s unique system of endnotes. He didn’t use end notes or footnote markers. There is no indication while reading that there is an end note regarding any specific point, instead in the back of the book, divided by chapter but without page numbers, are the endnotes and each one is marked by a short quotation of a few words from the sentence it is referencing. This means you can’t easily read the text, and then check for a source or explanation, because you do not know if there is even a citation unless you flip to the back and happen to see a fragment of the sentence you’re reading. This leads into the last problem, which is that while most of his claims and assumptions are reasonable, some are more out there and it’s hard to verify such claims, such as the charge of being a “doer of evil” as Jesus was accused, being the term in Roman law used for magician.2

Despite these problems, Jesus the Magician is still an excellent, well-researched, and thought-provoking text. Regardless of whether or not your specific practice has roots in the Judeo-Christian magical system, this book will illustrate the role and understanding of the magician around the BCE/CE crossover period, and perhaps make you re-evaluate the character of Jesus.