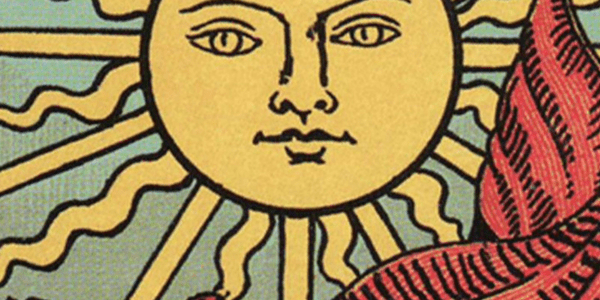 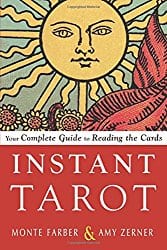 Instant Tarot is a really unique tarot book. There are so many on the market right now, it can be hard to distinguish one from the other. Of course there are always a few standouts (I love Kitchen Table Tarot by Melissa Cynova at the moment), but generally it takes something special to stand out. It’s almost hard to imagine a new angle on card interpretation, but in this volume, Monte Farber and Amy Zerner have found an interesting one. Their focus here is card positioning — where the card sits within a layout. It sounds deceptively simple, but it’s innovative and new for the genre.

The book starts off with a thumbnail description of each card. For me, this might have been a turn off when I was first learning tarot. But today, after years of study, I’ve come to the conclusion that detailed card descriptions and interpretations can actually inhibit a newbie card reader. Too much specific information can stymie the flow of a reading and limit the reader’s application of intuition. It can also make it tough for new readers to see the flow between the cards. Many readers start out with a book close at hand for reference. I remember doing this myself, and found that the stilted way the reading flows when you’re using the book for each card doesn’t serve a reading of more than a few cards. Shorter, descriptive interpretations of the cards get the crux of the meaning, and encourage the reader to make the connections between the cards and the person for whom they are reading. Of course, each card’s meaning is dependent on the position of all the cards in the layout, and are also affected in relation to one another. You read them in sequence and also together, and find the flow or narrative of the reading.

That’s where the genius of this book comes in. As one might expect, it’s based on the 78 card Rider-Waite-Smith style deck with 22 major arcana cards and four suits. As a side note, the images throughout the book are those of the Rider Tarot. I like this because it familiarizes readers with the most fundamental and basic type of cards they will encounter. The information can be extrapolated to any 78-card deck the reader chooses, but it’s great that they portray the most common deck that beginning readers might have seen or be developing familiarity with.

After the brief introduction to card meanings, the authors move directly into the main part of the book — the card positions. They go through each card in the deck systematically, and provide a few short sentences as to what the card means in each position within a reading. The positions follow the Celtic Cross, so there are 11 different interpretations listed for each card in the deck. That comprises the remainder of the book, making it a straightforward but useful resource.

Of course, this approach has limitations. If a reader decides to purchase Instant Tarot (and I think it’s a great addition to a tarot library), it’s not a standalone volume. You will still need other books with different approaches for reference, to learn the nuances of the cards more thoroughly, or to learn about different ways to read them. Tarot is a complex subject, as any enthusiast will agree.

The complexity of the subject brings us to the shortcomings of this card position approach — it’s very reliant on the Celtic Cross. It devotes about 230 of its 258 pages (89%) to this specific type of interpretation — essentially “what does this card mean in this position?” I’m not sure it is a book that will teach card meanings or facilitate a book-free reading. It also glosses over other critical information: some discussion of the major arcana as a representation of a life’s journey, and basic information about the meaning of the suits and the numbers. It’s very helpful when the reader comes to understand basic themes within the minor arcana — that pentacles tend to refer to material resources or tangible assets; or that between the four suits, cards numbered five tend to indicate difficulty or strife of some sort. I think learning those basic tenets of the deck is really helpful to support new card readers. The way Instant Tarot is laid out doesn’t lead the reader to develop their understandings of the suits and numbers. It makes it appear that the minor arcana might best be learned by rote, which is certainly not the case. I think approaching the deck as a compilation of 78 disparate cards with meanings that must be learned separately would intimidate anyone.

Those simple guidelines are lacking here. Also, of course — not all readers use the Celtic Cross spread, but it’s basic and ubiquitous enough that it’s worth doing a deep dive as this book does. Beyond that, the book covers two other approaches to card reading: a one-card question, and a three-card question. In those contexts though, it doesn’t deviate from the card position technique. It just manipulates the questions and (one or three) card layouts so that the Celtic Cross card positions can be superimposed on the reading. Unfortunately, this turns out to be pretty clumsy.

Each alternate card spread (there are two: the one-card question answer, and the three-card question answer) gets two pages of explanation here. The interpretations are based on the card positions listed in the Celtic Cross layout, i.e. card two is “what surrounds you,| card three is “what blocks you,” card four is “what grounds you,” and so on up to card 11 “the outcome.” Using the one-card-question technique as an example, you need to ask a question that might be easily answered by a card in a particular position in the Celtic Cross spread. Thus you might ask, “What issues are guiding this decision?,” then you need to look at the Celtic Cross spread and pick the card position that might apply (perhaps card 10, “your hopes and fears”), then pull a card from the deck and use the interpretation that applies to position 10. I found this process tedious. If the question you pick doesn’t fit neatly into one of the Celtic Cross’ card positions, then the interpretation won’t fit neatly into this model of reading.

With respect to the three-card reading, the authors offer a past-present-future model that relies on cards in positions five (“what is behind you”), two (“what surrounds you”), and seven (“what is before you”). Another option is the mind-body-spirit layout, which uses interpretations of cards from positions four (“your foundation”), seven (“what is before you”), and six (“what crowns you”). I think the card position paradigm falls short in its application to these types of questions, and seems unwieldy. Once the reader deviates from the Celtic Cross model, the card position approach seems less useful.

Having said all that, I like Instant Tarot. If you’re content to use the Celtic Cross layout (which is a great layout!), it’s terrifically useful. With the one- or three-card layout, I think it feels less logical and helpful; for any other layout the books won’t really help you. All this to say: the book imparts a lot of knowledge in a user-friendly way, but that knowledge may not be transferable to varying card layouts that readers might want to experiment with. And as we know, experimentation is a big part of learning tarot. I still would recommend this book. It’s unique and novel, and sets itself apart from the bewildering array of tarot card books available today.