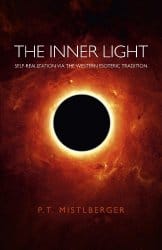 The Inner Light is a book geared around self-realization in the Western magical system. It seeks to help the reader find and understand the path to one’s self, how to peel away the layers of falsity to find their core.

As a reader, it is sometimes hard to tell if a book is right for me, so I’m happy to see when the author discuss whom the book is written for. Mistlberger describes the text as being for “spiritual seekers who desire some historical rigour and background theory,” as well as “academics or intellectually oriented students of the esoteric paths who desire to undertake some practical ‘inner work,’“ in addition to “the curious general reader,” and lastly the “serious student of inner work.”1 So this book is for occultists and non-occultists, as well as beginners and seasoned practitioners, and people interested in history and theory and people interested in practical work. Needless to say I wasn’t reassured by the sweeping claim of the book being for everyone literate, but that’s just the intro and authors need to sell their books, so let’s look deeper at The Inner Light and see who it is really for.

The Inner Light seeks to blend theory and practice, history and method: “This book is an attempt to synthesize historical research with esoteric theory and practical inner work – a combination not typically seen.”2 The last two decades have seen a steadily growing field of historically and academically inclined texts on magick, yet the historical research in this text was next to non-existent, and where it was present, it was in many places shoddy. (If I might quickly flash credentials I would like to point out I do have a history degree, so I’m not speaking from ignorance of history or historical methodology.) Two small examples would be tracing the root of alchemy to an Arabic term meaning “the art of transformation,”3 and claiming that the European witch hunts were started on misogynistic grounds,4 despite the fact that almost no women were accused for the first century of the witch hunts. (Though once the target shifted to women you can see how the witch hunt took up a decidedly anti-woman flare.) For the most part though, history is barely addressed, which, all things considered, may have been a good idea.

The practical inner work is also fairly lacking in this text. It’s confined to roughly a tenth of the book, and consists of a collection of meditation instructions (many Buddhist) and astral plane and dream work (with a lot taken from Tibetan dream yoga systems). What is not history or practical work is largely the author theorizing on the systems and the nature of self and self realization.

As mentioned earlier, it seems a bit unclear on who the targeted audience of the book is, or even what the author means by “Western esoteric traditions.” For instance, the majority of the text is anti-magick, unless magick is framed as psychological5 or for purification, and while I know there is more to the esoteric system than just external magick, the author’s discounting of it completely seems odd, and I’ll clarify more in a minute. The book is also anti-divination saying it is just magical thinking that “simply serve[s] to reinforce a constructed reality by adding new unwarranted assumptions to it.”6 So what is left of the Western esoteric system without magick or divination? Well, apparently all ritual magick is actually about purification and self-observation7. I’m not sure how that functions without the magick part of it, but apparently that’s what it boils down to.

The author draws a line against new age thinking and methods, calling it “fluff.” Then continuing their point of anti-magick says that magick is unnecessary, and then goes on to discuss how to use The Secret to get whatever you want instead, because to the author’s mind, The Secret is somehow neither new age nor fluff nor magical.8

To be honest, I’m unsure what the author wants to portray, and what their background is, in terms of magical or mundane studies, but their biases are very clear. Focusing on the magical side of things, he outright states the Holy Guardian Angel (HGA) is the higher self (and doesn’t say how or why he knows or thinks this),9 says that Western systems are safer for the psychology of Western minds10 (though recount many of the techniques are Buddhist in origin), says the HGA doesn’t exist,11 and repeatedly implies that the Western system he’s trying to support is flawed and only should be used as a psychological model.

Mistlberger references authors and gets names wrong,12 cites famous people such as Mark Twain with quotes that Google can’t find anything remotely similar to (from Twain or otherwise), uses poor science to support points, says the Tibetan and Egyptian Books of the Dead are similar but doesn’t say how,13 and while common knowledge claims are cited, he fails to cite important claims of studies or events.

Unfortunately, it was not just the author’s magical views and academic errors that detracted from the book, but his social prejudices and language was problematic too. For instance, in the first five pages I had already cringed at the reference of a hypothetical person from East Asia as “the Oriental.”14 At the time he was discussing (but not quoting) C.J. Jung, and for Jung (who died in 1955) to use the phrase “Oriental” for a person is a product of his time, but for an author writing in the 21st century it’s more than a little backwards and offensive. When discussing their understanding of Anton LaVey Satanic ethics, Mistlberger parenthetically points out that it sounds like the same rules that organized crime operates by, and while I won’t speak to the (in)accuracy of that statement, to paint a valid (and often maligned) religious tradition with the same brush as organized crime is something that would be more at home in an occult book in the Satanic Panic of the ’80s, not the present. He refers to sex magick as “Western Tantra,”15 which, for someone who supposedly researched tantra, seems to show that he doesn’t understand what tantra is in the slightest, and continues the popular Western misconception of yet another religious tradition. When discussing the term “witch” in the Bible, Mistlberger claims it is referring to malicious spell casters, not beneficial ones, and though he does point out that most people and traditions work for the good of others, he states that “malefic spell-casters were common, and found in many cultures (just as they are today, particularly in African or Caribbean nations.”16 Because he felt it was necessary to point out that if there are “bad” spell-casters they’re mainly following those “spooky” African religions. Despite the fact one doesn’t have to look hard into the (white) Pagan and occult community to find irresponsible and malicious spell casters, he makes the point of singling out hypothetical “bad” spell-casters in the African diaspora religions, which I can’t help but see as ignorant at best, and racist at worst. Lastly, he equates forced celibacy with turning men gay, and goes on to equate homosexuality with sexual abuse.17 These ideas and attitudes, casually presented as fact not even opinion, make me think that this book would have been more appropriately published 30 years ago, not in 2013.

Usually when I review a book I say who it would be an appropriate text for, but after reading the book I admit I’m not sure it’s appropriate for anyone. It’s not academic, it’s not practical, it’s not accessible nor styled for a beginner. It misses all of the targets the author claimed it was going for, and manages to alienate and offend the readers at the same time.