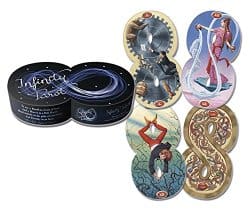 The Infinity Tarot is an Italian-designed tarot deck, inspired by these words of mystic poet William Blake, who recognized that the spiritual essence of humankind is imagination.

To see a world in a grain of sand,
And heaven in a wild flower,
To hold infinity in the palm of your hand,
And eternity in an hour.
— William Blake

The above quote is inscribed on the tarot box, and the deck itself encapsulates this concept of nature and the infinite. This deck is unique because of the unusual shape of the cards.

The cards are rounded like the symbol for infinity, and about the same size as an average tarot deck, though the shape does make the cards a little unwieldy when shuffling, but you get used to it. The back of the cards has a colourful design of creatures and gemstones. They are presented in an elegant box of the same shape.

The deck follows the traditional format of major arcana and minor arcana, the four suits being Chalices, Pentacles, Wands, and Swords. One of the things I like most about this deck is that the minor arcana cards each have a unique design rather than just a number and a suit. This adds a richness, depth and detail to any reading. For example, the Ten of Wands depicts a muscular man kneeling atop a pedestal. In his arms he clutches the 10 wands which are supporting a heavy rock. Between two of the wands is a white rat which is gnawing through one of the staves.

The cards of the major arcana are equally detailed; the colours are vibrant and contain diverse imagery including creatures and figures from mythology, sorceresses, wizards, princesses, and knights. There is also an unexpected steampunk twist with a locomotive and a bowler-hatted man in the Wheel of Fortune.

Like Blake’s writings, the Infinity Tarot Deck serves the purpose of revealing to people the deeper nature of reality. This makes it an excellent deck both for doing tarot readings for others and for exploring one’s own inner psyche.

The Infinity Tarot Deck is accompanied by a small handbook which fits neatly in the box with the cards. It contains an example spread layout, and brief meaning of each card in six different languages. The spread is a unique one which allows the user to explore and analyze the distant past, recent past, present, the distant near future, distant future, and the deepest subconscious.

The imagery and symbolism are clear and easy to read, making this a great deck for the non-expert. However, I was slightly disappointed by the lack of detail in the accompanying guide book. I would have liked to see a more detailed explanation of the specific symbolism in each card, but at least the reader can leave this up to their own imaginings. I think that if you are a beginner buying this deck, you should also consider purchasing a more detailed book about tarot divination, such as The Ultimate Guide to Tarot Card Meanings, or Seventy Eight Degrees of Wisdom. A reading of William Bake’s poem, The Marriage of Heaven and Hell, which expresses the idea that each individual is a spiritual being and also a reflection of the contrary nature of being; a mixture of rationality and creativity, may also help deepen an understanding of this tarot and its symbolism.

I have been immersed in tarot reading for more than 25 years. Though I have my favourites, I am always on the lookout for new and exciting decks. This one caught my eye more than any other in several years. I enjoy the bright and stimulating designs. I used the cards to do a reading for myself using the layout recommended in the guidebook. I found the reading to be very accurate relating to my past and present situations and that the cards helped me reach into my deepest subconscious and explore some issues that I had not previously realized were currently affecting my life.

The Infinity Tarot is a beautiful deck that facilitates the reader in peeling away the any layers of the subconscious and touches on the heart of life and nature. It would make a wonderful gift and will inspire for years to come.