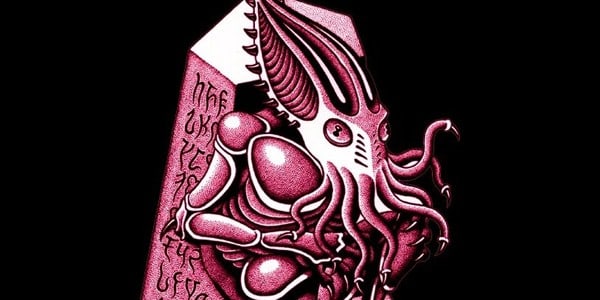 Liber Koth and Nox: The Black Book were originally published separately in 1997 and 1998 respectively, by Logos Press.

Nox is an anthology of 22 essays and articles previously published in Stephen Sennitt‘s magazine of the same name written by various chaos and black magicians. Primarily consisting of the rites and theories of the Order of Nine Angels, Nox draws heavily on the Golden Dawn, Aleister Crowley, the Ordo Templi Orientis, and H P Lovecraft for inspiration; often “correcting” their views, Lovecraft in particular (apparently forgetting that he wrote fiction).

A number of essays focus on the Werewolf Order, “an international society of black magicians dedicated to ‘the creation of a psychic dictatorship destined to hold sway over the last thirteen years of the twentieth century, and serve as a vanguard for the coming occult world order.'” Radio Werewolf, the “sonic propaganda unit” of the Werewolf Order, was established by Nikolas Schreck in 1984. In Betty Purdy’s essay on the history and theory of the order, she states that “[t]he name Radio Werewolf, [which was] used previously by the last National socialist broadcasting station in Berlin at the apocalyptic end of World War II, indicates its goal: to transform the listener into a lycanthropic, or werewolf state.”

The basic concepts were intriguing, Schreck taught that “the ancient mythological figures of the werewolf and vampire are actually archetypal role models for the next step in evolution: cruelties of the natural order and man’s animal origins, and yet the master of a new science of pagan technology” — an interesting spin given the otherkin phenomenon rife in today’s pseudo-occult subcultures. Further, Purdy states that “[r]emoved from Judeo-Christian concepts of evil, the vampiric or lycanthropic character is nothing less than The New Man freed from guilt, repression and neurosis. Radio Werewolf sees the creation of this new species of lycanthropic men and women as one of its most important goals.” The essay further details the Werewolf Order’s thoughts the predator, and membership requirements, though it’s not clear if the order remains active today.

Another fascinating essay included in Nox is Phil Hine‘s “The Howling,” which outlines demonic evocation and innovative use of Maslow’s hierarchy of needs in ritual. Other essays draw heavily on the Cthulhu Mythos, voodoo, Satanism, psychic vampirism, amongst other ‘black’ topics, and various rites. Loosely grouped into four categories, these essays prove an interesting and eclectic mix, though as a whole Nox could have benefited from further editing as there are numerous grammatical errors.

Koth is here defined as the “Black Tower of Set which overlooks the Abyss, the world of shells (Hollow Ones),” however this text is not explicitly Setian. Rather, Liber Koth is comprised of eight workings within the Cthulhu Mythos, complete with sigils for eight Old Ones, among them Yog-Sothoth, Nyarlathotep, and, of course, Cthulhu. The rites are lightly scripted, with accompanying notes detailing the experience of the author.