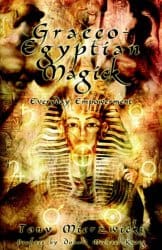 Tony Mierzwicki’s Graeco-Egyptian Magick is an excellent beginner’s guide to the astrological magick found in the Greek Magical Papyri (PGM or Papyri Graecae Magicae as it is referred to in academic circles). It’s clear that this is not the only source text he’s well acquainted with.

Those who practice modernized astrological magick may find this book difficult at first. The astrological sequence of initiatory and practical processes follows the Ptolemaic Order (Luna, Mercury, Venus, Sol, Mars, Jupiter, Saturn) because that was the order most prominently used in Antiquity, particularly by the magicians whose works form the basis of the book. He also includes the Homeric hymns for six of the planets, and all of the Orphic hymns for the seven planets.

There are a few other differences that Mierzwicki’s system of astrological magick displays against the more contemporary practices of modern magicians. One of the ones that is the most interesting is the lack of circles, particularly the lack of protective circles. These are displaced by individual calling upon Aion, the Alexandrian God of Eternity, as well as Ogdoas (the ruler of the Ogdoad, or the seven planetary spheres) using elements taken from the PGM:

There is no evidence of the Graeco-Egyptian magickians working within a circle. They confronted spiritual energies directly, much as many shamans still do. The Graeco-Egyptian magickians were only interested in facing each of the four cardinal directions and not tracing a 360* circle… Each ritual begins with a short invocation to Aion, the ultimate god, whose protection is sought. With his protection, no harm will befall the ritual participant.1

The opening Rite starts and finishes with an invocation to Aion as an additional safeguard.2

He also recommends cleansing procedures, such as cleansing baths or showers using easy-to-find substitutes for things like Natron. I was, however, somewhat surprised that he didn’t point out how easy it is to blend table salt and baking soda to produce something roughly similar to Natron, a combination of naturally occurring minerals found on dry lake beds in some places, used for purification by the Egyptians and magicians of the PGM.

Another element that is particularly interesting and inspiring is the author’s use of traditional astrological texts to show the beneficent/maleficent aspects to all of the planets; this is something that largely cuts out the dualism that gets in the way of modern practitioners working with the more openly malefic planets like Saturn or Mars and places the planets on equal footing. Furthermore, the author makes a note that the deities being called upon rule the planets, formalizing a relationship between the two that is often debated by modern practitioners.

The rituals for initiation are fairly straight-forward, and I found them to be more than fairly enjoyable to perform. I am, however, particularly fond of chanting the Voces Mageia. To aid those who may very well stumble over the “words of power,” the author was also kind enough to include a pronunciation guide in the appendix.3 This is something that is occasionally lacking in works like Mierzwicki’s book. Following each initiation rite, the author explains some of the examples of syncretism and establishes an outline of how the planet or divinity being called upon appears in the PGM, specifically the sampled rituals or spells. For example, following the Helios ritual he expands upon PGM IV. 1596-1715:

“In this spell, Helios is equated with the serpent god, Agathos Daimon, who was mentioned in the invocation of Hermes. This is an example of flattery, as Agathos Daimon is a superior god to Helios.”

One unfortunate thing about the book, however, is that he often follows up such interesting tidbits by advertising his next book. Such was when he follows up the previous section by saying in parenthesis: “(Agathos Daimon will be encountered in the sequel to this book.)”

This certainly makes someone such as myself immediately wish to purchase and read his next book, but the frequency some of the aforementioned statements occur at can be a little tiresome. Making up for this slightly negative factor is when he notes where one can find more information on his website hermeticmagick.com. This allows those genuinely interested and diligent about the material being presented to wander over and see what is available. I am not, however, even sure if his second book has been released, making his comments on where to find more information all the more infuriating. Still, I consider this a relatively minor downside which will only be noted by individuals as obsessive as myself.

The final question probably remaining is this: do these rituals work? My answer, despite not having finished the last two spheres and their rituals, is absolutely. My favourite thus far has been the first, Lunar, initiation ritual. Despite having practiced aspects of astrological magick before, I felt a sharp increase both in my ability to perceive lunar qualities and tune in to the first Ptolemaic sphere. That being said: the other rituals seemed to work and initiate just as well, even if the results that were felt happened to be less dramatic.

I would certainly recommend this book to anyone and everyone interested in the Graeco-Roman and Egyptian magick of antiquity, and especially recommend it to anyone with an interest in working with the rituals in the PGM. There are plenty of books out there which make bold claims about recapturing the magic performed in Antiquity but which, nevertheless, fall short. This is not one of those books. I very much look forward to reading the author’s second book, whenever it happens to become published or I hear about it.