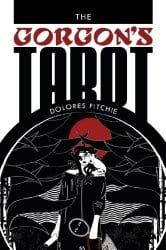 The Gorgon’s Tarot is an unusual deck: the cards are round, and the images are predominantly black and white. “Gorgon” appears to be a nickname for Dolores Fitchie herself, and also serves as the patron creature presiding over this deck, in particular, Euryale, the gorgon who defied the gods, seeking knowledge and truth.

The cards began life as a graphic project, not a divinatory tool, and The Gorgon’s Tarot was more than 10 years in the making. The black and white design is deliberate and is intended to remove colour symbolism, which Fitchie finds distracting, and has no interest in. There are two cards that contain splashes of red: The Blind Gorgon and the Devil. When they appear, the bright flashes of red make these cards seem all the more startling.

The artwork is simple, with line drawings of figures, flora and fauna against geometrically-patterned backgrounds, yet the imagery is compelling. Some cards take inspiration from the artwork of Pamela Colman Smith’s Rider Tarot, others from the Motherpeace Round Tarot, illustrated by Vicki Noble, and others take the cards in new directions.

The Blind Gorgon is an addition to tarot’s typical 78 card deck, and may be used in readings as a wild card, like a more enlightened Fool, or taken as a significator. Other cards feature interesting departures. The Hanged Man is made gender-neutral here, and becomes the Hanged One, which I really like. Indeed, many of the figures appear androgynous, leaning towards a female interpretation of the figures, and are typically described as female in the accompanying booklet — except the Devil, who is clearly identified as a “He.” Death is depicted as two skeletons, and between them a snake, which periodically sheds is old, worn-out skin for a shiny new one.

Despite its inception as an art project, Fitchie does explain the meanings behind the cards she’s created in the accompanying booklet, and offers keywords to unlock the cards’ divinatory potential. Each card has a brief description or story, and a few keywords denoting its upright and reversed meanings. Also a title or motto for each card in addition to the card’s tarot title. For instance, the Fool is “The Spark before the Fire,” the Magician is “Fire Conquered,” and the High Priestess is “Reading the Unwritten.” These extra titles or mottoes add another layer of context and meaning to the images.

Each suit also tells a story, and for Fitchie, leopards have a special significance above and beyond the other figures, dogs, cats, rats, and other less identifiable creatures that populate the deck. So when you see a leopard in a card, Olufemi, take special notice. Olufemi appears in the Nine of Wands, and the Six of Pentacles; the latter card depicts a man, and a woman who contemplates inequality.

The suits symbols themselves are powerfully drawn. Wands are depicted as batons with a repeated swirly pinwheel pattern, which aptly represents their energy. Cups bear the fish of their water suit; swords are straight and fierce; and pentacles bear starfish-like stars at their centre. The court cards are pages, knights, queens, and kings. Fitchie favours the elemental associations of fire for kings, and air for knights, and denotes both as decidedly male. The backs of the cards feature two serpents entwined, also in black and white. Even the box it comes in is lovely: solid, elegant, and with hidden magnets to close it securely.

Reading round cards is new for me, and I was happy to find guidance on how to interpret them. If the image is upright, use the traditional meaning; if upside-down, read as reversed, or sometimes locked,; if tilted to the right, the intention may be overstrained; or, if tilted to the left, the influence or process may not yet be complete.

The cards are large, roughly 14.5 cm (5.5”) in diameter, which is wonderful as there is space to take in the imagery, but it is unwieldy in my hands, and with round cards, shuffling is difficult. I found it easier to spread them across a large table and mix the on its surface. I asked the cards what they had to tell me, and the message was clear. I was a little worried that with a black and white deck, and one with such potent imagery, the reading might be dark or overwhelming, but the message was surprisingly positive, even when describing my blockages and things I need to overcome. It turns out the deck isn’t dark at all, but filled with humour and purpose.

The Gorgon’s Tarot is a beautiful deck, rich with symbolism, and sure to become a new favourite.