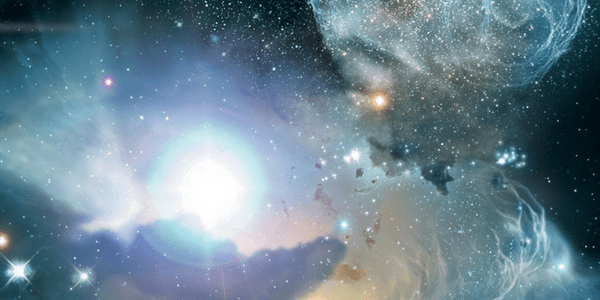 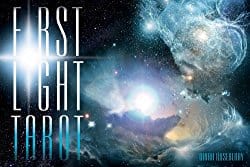 Okay, so first off, random thought, right off the top of my head: First Light Tarot is amazing. This is the first time I have come across a deck that combines the major arcana of traditional tarot, the innovation of oracle cards, and a concept I had never heard of before: spread cards. Oh, and let’s not forget the fact that the images of the deck come straight from the Hubble telescope — essentially bringing star gazing right to your altar, or where ever you choose to do your readings — even if you don’t have your own telescope. Yes, my friends this deck is — and pardon the geek speak — a divination limit break. But, on the other hand, considering it’s a limit break, it may not be suited for readers who are just starting to learn their craft.

Dinah Roseberry makes certain to list the definition of “first light” in the companion book. Elsewhere, it is described as an astronomical term, “ first light is the first use of a telescope to take an astronomical image after it has been constructed.”1 The book offers a more detailed and complex definition, but the meaning of the title of this deck is simply explained by this. Tarot and oracle decks can be used as a means of “first light” to look deeper into oneself, to pierce the veil, and to see what is unseen. It does seem that Roseberry’s reason for crating this deck was to give readers a first look into something beyond their own experience. And what better way than with images from far, far beyond what we can see with our naked eye?

The deck and 96-page booklet come in a beautiful box that is decorated with a Hubble image that is also used for the book’s cover and the Magician card. Each images for the cards list the location, and give credit to those involved in the image. These cards are larger than common playing cards, and it takes a bit of skill to shuffle them.

The booklet begins with an acknowledgment, an anecdote on the title, descriptions of the spreads and how the spread cards can be used, as well as correspondences for astrology and numerology, a section on the images ,and so forth.  It then goes on to explain the 22 majors and 22 insight cards.. It devotes a page to each of the cards of the major arcana with upright and reversed meanings given.

The 22 major arcana in First Light Tarot are similar in name only to those in the Rider Tarot. However, while the images are different, the meanings are similar for the most part. There are no minor arcana. Though, the 22 insight cards could be taken as minor arcana, but they closer resemble cards found in oracle decks.

The spread cards are something else all together. The 22 spread cards can be used to create your own spreads, in your own manner, without the structure of most other tarot or oracle books and decks. For example, I often take the spread cards and take out the ones that I feel represent the questions I want answered. I like to focus on a question, decide how it should be looked at, and then lay the cards face down. I will take the remaining 44 and focus on my question, as well as mentally showing to the Universe that the cards should lie in the manner of the facedown spread. Then I flip the spread cards, and follow up with the divination cards. So far I have not been disappointed. I feel that this method teaches me to trust in a higher intelligence, as well as not be so “forest for the trees” about divination, when divination is about expanding your viewpoint, in both a mundane and metaphysical sense. I should also note that First Light Tarot can be used with other spreads. I have used the 22 major arcana and 22 insight cards with spreads from different books with favourable results.

However, I found these cards more difficult to read than other decks, as I am used to reading decks with intricate artwork. It was a challenge to look at an image of a star cluster and discern what was happening for a querent. It took me a few tries, but as I did so, I wondered if this irritated feeling was the same as someone might feel when gazing at the stars. After a few tries, I found that I could read them. Image interpretation is different for each individual: one person might be able to read this deck with no issues, while another would have a great deal more trouble.

Though the cards’ imagery isn’t typical, it still manages to embody the meaning and energy of tarot’s major arcana. For example, card 16, the Tower, is quite dark and foreboding, which is how that card normally is reads, regardless of design. Roseberry says “the images for this deck have many facets and those who have responsibility for their discover, study, exploration and presentation, are many.”

I found the First Light Tarot enjoyable to use, and I loved the idea of divining with stars I could not normally expect to see with my naked eye. I could easily picture using them as a meditation tool. The symbolism in this deck is visually rich, and thus it lends itself readily to intuitive interpretation. For this reason, this deck may be a good one to teach tarot to students in a class format, though as mentioned above, it may not be the best for a new person to begin their solitary exploration of tarot.