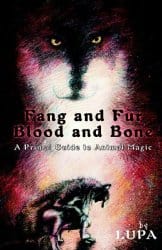 Cultural appropriation is rampant in totemic work, as Lupa acknowledges, but notes that “[i]n any field of study there will always be those who are neophobic and believe that anyone who deviates from specific patterns is not only disrespecting but also diluting the effectiveness and “truth” of said field”. She writes “totemism is something that is essentially universal,”1 arguing that she has practiced totemism for years with no formal background or tradition, and, as she says, “can still boast a decent success rate.”2 As Lupa comes from a contemporary Pagan background, this book tends to focus on a contemporary Pagan approach to the subject.

There are a number of sections that won’t appeal to everyone, for example, the sections on sacrifice and working with animal parts didn’t agree well with me, a vegetarian. Though some of the material may be controversial, Lupa strives to present it in a palatable fashion, and certainly those interested will likely find benefit from their inclusion, especially as these subjects are often skirted in contemporary Paganism. Clearly, Fang and Fur Blood and Bone does not intend to be merely yet another book on animal magick.

One of the more personally appealing ritual ideas described in the book is the creation of an animal, essentially inspired servitors of made up of composite animal parts, with specific details of a creature Lupa created in the past. Lupa details another ritual she employed in order to obtain a familiar. We learn its name and feeding habits, but not how it came into her life, nor how she’s worked with it. While it’s a shame that practical applications are left vague, the section advocating responsible familiar care is certainly commendable. Lupa leaves moral decisions to the reader, though, naturally, she does offer suggestions on how certain situations should be approached.

Lupa also touches upon therianthropy, a state where a person believes s/he is an animal in spirit (at the very least), and shape-shifting. She notes differences between therion and non-therion shifting – a distinction not often made, but interesting to see, given the rise in popularity of Otherkin-identification over the past decade or so.

Appendices are referenced early and constantly throughout the text, which made me wonder whether or not the material really ought to have been tacked on at the end, or if the structure of the text could have used reworking to incorporate them earlier on.

Throughout the text, Lupa employs a relaxed, conversational tone, however with numerous typographical errors the rough edges show and details are not always fleshed out; it perhaps could have benefited from further editing.

Fang and Fur, Blood and Bone provides a number of ideas not commonly found in the average book on animal magick or totemic work, and anyone interested in this area of magical exploration would do well to pick it up.