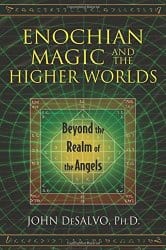 John DeSalvo is a passionate authority on all manner of things metaphysical, including Enochian magick — a subject on which the author has written two previous books, The Lost Art of Enochian Magic: Angels, Invocations, and the Secrets Revealed to Dr. John Dee and Decoding the Enochian Secrets: God’s Most Holy Book to Mankind as Received by Dr. John Dee from Angelic Messengers, in addition to others on related topics.

His latest, Enochian Magic and the Higher Worlds: Beyond the Realm of the Angels, maintains that the angelic communications received by John Dee and Edward Kelley were incomplete. The entities communicating with Dee and Kelley cut off transmissions before the final, and most powerful, invocation was revealed — the Enochian call for union with the divine.

Enochian magick is a system received by the notorious 16th century occultist John Dee and the scandalous seer Edward Kelley. The angels revealed an alphabet, then tablets, before transmitting cryptic messages in the angelic tongue. Dee and Kelley received intricate instructions in how to construct the Enochian temple, before receiving a complex, hallucinatory series of invocations, known as the Enochian calls, which gives the ambitious magician access to the angelic world of the aethyrs, of which there are 30 in total.

The lynchpin of the argument that makes up the bulk of Enochian Magic and the Higher Worlds, revolves around a passing statement from the angel Nalvage, recorded in the essential Enochian text A True And Faithful Relation of What Passed for Many Years Between Dr. John Dee And Many Spirits:

I am therefore to instruct and inform you, according to your Doctrine delivered, which is contained in 49 Tables. In 49 voices, or callings: which are the Natural Keys to open those, not 49 but 48 (for one is not to be opened) Gates of Understanding, whereby you shall have knowledge to move every Gate…

Through extensive guided meditations, DeSalvo pieced together what he believes is the final Enochian call, to produce union with the divine essence, essentially creating a union between magick and mysticism. He instructs the curious practitioner on how to recreate his results using two systems of his own devising, Magical Mystical Meditation and Power Magic.

DeSalvo’s research and ambition are to be applauded. The author is clearly passionate on the subject and his efforts to explore Enochian magick, rather than accepting it as some static, dead thing, are commendable. Enochian Magic of the Higher World would have benefited from sticking closer to this subject and exploring its many implications, however, rather than straying far afield, to god knows where.

Instead, DeSalvo spends his time talking about things that have absolutely nothing whatsoever to do with Enochian magick, with page after page of psychic communion and crystal skulls, which makes up roughly half of the book. DeSalvo does offer some commentary on the mechanics of a magical ritual which may be interesting, and perhaps useful for some, but it may be a bit rudimentary for the student most likely to be investigating this sort of material.

John DeSalvo is a scientist. He’s got a PhD in biophysics and has scientifically studied the Shroud of Turin and the Great Pyramid of Giza. He treats his occult studies with the same level of scientific rigour, taking The Equinox’s maxim, “The method of science — the aim of religion” at its word. DeSalvo spends a great deal of Enochian Magic describing what these higher realms might be, going into explicit detail about quantum theory, string theory, and extra dimensions.

However, DeSalvo seems oblivious to his own researcher bias. He frequently comes down on New Age practitioners, which he feels are full of hubris and self-deceit, while talking at great length about his power artifacts and the number of past lives and spiritual guides he has.

DeSalvo gets absolutely dogmatic about the effectiveness of different techniques for producing altered states, such as sex and drugs. Why the visions produced under the influence of hashish are to be suspect, while those from a supposedly 4000 year old crystal ball are to be trusted to the point of printing them, with no editing in a text, is somewhat confusing. It might be better for students of the occult to make up their own minds about what works for you and what doesn’t.

All in all, it’s a confused and muddled book on a very interesting subject. DeSalvo discusses power objects and aura photography for a solid 14 pages, with six colour plate inserts, which add little to the conversation other than “talismans do stuff,” and the connections between this and Enochian magick is unclear.

De Salvo seems to have an inherent mistrust of the angels, which is somewhat ironic as he spends so much time communing with them. The book is loaded with warnings to not believe what the spirits tell you, as the practitioner does not know which spirits are good and which are evil. Instead, he advocates going beyond the realm of the angels, straight to the source, in a beautiful hybridization of magick and mysticism.

While I agree we should all be searching for the source, we should all be fingers pointing at the moon and that everything else is mere party tricks, it doesn’t change the fact that there are many, many interesting things to see and know along the way. In my experience as a long-time practitioner of Enochian magick: this stuff works. Speak those weird words made from unidentifiable characters out loud (with suitable preparation, of course) and things will happen. My life changed exponentially this last time I began calling on the angels. So, while I applaud the union with the divine as the ultimate point, I’m not entirely sure why you’d want to skip the angelic realms entirely. We’ll have plenty of time to be united with the godhead once we’re discarnate.

The Power Magic invocation is a worthy inclusion, one which you’ll not find elsewhere, and DeSalvo even goes so far as to include a phonetic translation to let the practitioner know how to pronounce Enochian words. Some may criticize De Salvo for constructing his own Enochian call, but that’s precisely the kind of thing that makes this such an interesting and exciting field of study. One only wishes that De Salvo would have extended this same open-minded and collaborative spirit when discussing other magical practitioners.

Enochian Magic and the Higher Worlds: Beyond the Realm of the Angels is not only a useful addition to an occult library, but also an interesting bit of research that drives the tradition into new territories. I’m sure Dr. Dee would be pleased.