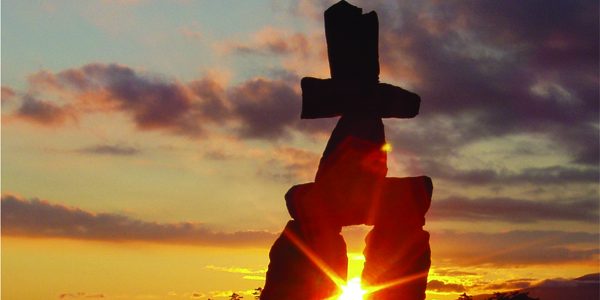 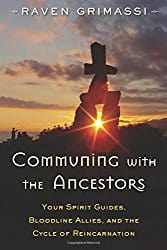 Communing with the Ancestors is a tough book for me to review. It wasn’t what I thought it would be at all! I was anticipating a straightforward book discussing the meaning and value of ancestral communication, and rituals that would help to support those connections. Perhaps some discussion of issues like where occult work concerning heritage could be problematic on the basis of appropriation or along xenophobic nationalist lines. Instead, Raven Grimassi tells us at the beginning that the book is a collaboration with himself and the ancestral spirit. I’m not sure if this fact might explain the nonlinear way the material is presented, but I did find it challenging to read and understand.

In the preface he writes, “My primary goal in this book is to provide pathways through which the Ancestors can regain access past the things that have stood in their way.”1 Grimassi goes on to say that his goal is to assist distracted descendants to hear ancestral voices which can be a source of guidance, personal empowerment, peace, and inner balance. He specifically advises the reader to proceed through the book from beginning to end, rather than skipping from section to section. Yet, the book is quite nonlinear itself.

Grimassi accesses two disparate cultural traditions to help explain a core concept to the book, that of the Three Selves that comprise each person. He writes that he used ancient Scandinavian beliefs, and also the Hawaiian Huna tradition. He notes that both are spiritual belief systems relatively uncontaminated by the influence of Christianity, which remain available to study. The Three Selves are called the Elemental Body, Human Consciousness and Soul Consciousness. The ancestors are conceived as part of a “Living River of Blood” that connects people with their forebears. These concepts are ones that Grimassi has developed, based on his research into other cultural histories. They are interesting, and apt, and do help frame his conceptualization of ancestors and ancestry.

He includes a discussion of how various cultures mark and celebrate ancestors, from the ancient Pythagoreans to Mexican Day of the Dead celebrations, returning to Scandinavia and Hawaii, and incorporates mythologies around ancestry. He discusses how burial rites and markers can connect us to ancestors in a concrete way that transcends symbolism, suggesting that ancestral spirits connect with and influence people in concrete ways. There is in this text an assumption and assertion of reincarnation; or what he terms the soul’s “quintessence” by which it is eternal, passed from one mortal body to another in the chain of birth and death. This was a little alienating to me, as someone who is not particularly invested in the idea of human reincarnation.

In keeping with this perspective, he includes some information about past life memories. Incorporating reincarnation into a volume about ancestors also complicates ideas about lineage. In his conception of the structure of the “Ancestral Realm,” Grimassi invokes a beehive, a snake (pointing out a snake’s resemblance to a DNA strand), and continues to discuss traditions in which mythic ancestors reside on the moon, or in the sea.

This information in Communing with the Ancestors is presented less in a historical or mythical way (which would establish lore around ancestry), but rather in a disorganized hodge-podge of ideas we are told came from an “agreement of consciousness” with Grimassi’s ancestors. The problem with this idea is that, as the author, Grimassi’s task is to make this agreement of consciousness accessible to the lay reader who hasn’t made this agreement.

The idea that the soul has knowledge that the egoic mind cannot access makes sense to me. However, it is the linear human mind that must process this book, so lacking linear structure made the ideas difficult to reconcile. Grimassi’s approach appeals to subconscious mind processing, and to the intuition of the reader; I imagine this is part of his intent with this work.

He advises the reader in the early pages that his book is essentially a collaboration between himself and “Ancestral Voices.” He specifically thanks the ancestors; and credits them for the unique format of the book, which he acknowledges diverges from other volumes on the topic. “Without my Ancestors, and a handful of Otherworld Allies, I do not believe this book would have been possible. Had I written it myself, I believe it would have turned out to be not unlike most published books on the Ancestors.”2

He writes early on that the subjects in the book can appear to be repetitive, cautioning that information does build on itself as the reader progresses through. However, this means that the section on how various traditions honour their dead is totally separate from another section on mythology of death, which doesn’t lend itself well to organizing ideas as one reads.

Chapter 9 includes “rites of connection” for veneration of one’s ancestors. I thought this section was well designed and the rituals looked excellent: a threshold ritual to release and bless a home or sacred space; a health ritual for communication with ancestors, and good information about creating shrines to ancestors and for healing, harmony and releasing spirits of ancestors. These rites all appear useful and I will likely use some of the information about shrines to add flowers, a white candle, and perhaps some replicas of bones.

My sense is that someone more familiar with Raven Grimassi’s work would have enjoyed Communing with the Ancestors more. I found the mystical tone frustrating. This has more to do with my set beliefs around ideas like reincarnation, the inherent value of bloodlines, and also a basic discomfort with allegiances based on heritage and bloodline — which I associate uncomfortably with nationalism. I think these predisposed me to being less open-minded to this book than perhaps I should have been. I also just found it jumped from topic to topic without creating a story about the relevance of ancestry, the value of honouring ancestors, and some ways to incorporate ancestor worship into a spiritual practice (which I would have been much more open to).

Grimassi has written an impressive number of books and is clearly expert in his subject matter of multiple and eclectic strains of Wicca. I hope to read some of his other works soon!