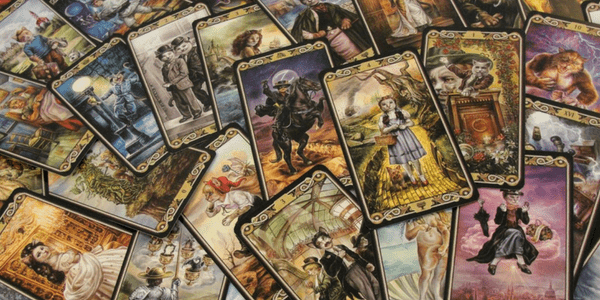 There are a lot of really unique tarot decks out there that speak to many specific niches. Cat Tarot by Carole-Anne Eschenazi is one such deck. The beautiful cards feature movie-inspired cat people and very little traditional tarot imagery. Be sure not to dismiss this as merely a gimmick deck. These cards may be full of whimsy, but they are no joke.

There are other cat-themed decks out there, but this one is truly unique. Its art combines cat people with movies to create something that is bizarre and familiar all at once. The deck is Rider Waite Smith (RWS)-based and features 78 fully illustrated cards.

The deck uses television and movie references. These references are well thought out but be warned, you won’t get them if you don’t watch a lot of television and film — all kinds of film. These cards feature golden-era actors such as Liz Taylor and Gene Kelly, mixed with films from all over the genre spectrum, from classic to modern. There’s a Harry Potter cat, and a Three Stooges-themed card, for example.

Although there’s a wide diversity of films used, they are all American and — though I know that these are just cats — they are all based on white actors. So, this deck doesn’t have any actual diversity, but given that they are all cats, I’m going to overlook that.

The art is really well done. The colour palate and style remains the consistent throughout the cards. The images are very clear and easy to read. They all have a sort of portrait quality to them in that the figure is really the main focus of the piece. This is different from general RWS cards in which the figures are part of a scene. In these cards, the figure tends to be the scene. Not unlike when someone steals the show in a play.

This is where your movie knowledge really comes into play. Because they deviate so much from RWS images, there are no hints in the card art, unless you know what the films are. For example, the strength card is Ellen Ripely from Alien. She is shown clutching her cat, Jones, and hiding while the alien stalks them. Weird choice for strength, right? Or not, because I know, having seen the film, she takes the alien head-on and outlasts every other person on the ship. Without that knowledge, I would be left wondering how a frightened woman is supposed to represent strength.

The little white book (LWB) is a small pamphlet. The card meanings given are fairly standard and do not deviate from what any other basic tarot source would tell you. The book isn’t really necessary for those who know basic tarot definitions; however, it does list the film references, all renamed for cats. This is fun but, beyond this and the included spread, the book offers very little information.

I did a few readings with this deck. The cards were quick to speak to me and using a mix of intuition, standard tarot knowledge, and film trivia, I was able give accurate and engaging readings. The problem with these cards was that the individual cards don’t have much to say.

What I mean by that is that once the initial meaning was gathered, there wasn’t anything else I could get from that card — I couldn’t return to the well, so to speak. They didn’t work well for single card draws and really didn’t shine until I began three or more card spreads (possibly because they enjoy a three-act structure).

I think that these would be a great deck to use in reading for others, especially when time is short, because they get right to the point. Despite not having very bright colours, they are very whimsical, and even the negative cards don’t seem all that bad.

Due to the differences between this deck and a standard RWS one, I would say that one should have some experience with tarot before trying Cat Tarot. I would not suggest this as a beginner deck, even if you are film buff. That being said, this deck is great for people who have experience with reading, love cats, and have a massive amount of film trivia stored in their head.