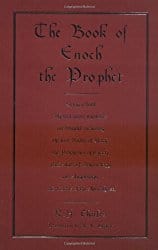 The Book of Enoch is a book that was removed from the Bible and the Torah for many reasons. Once it was held as an important book by the founding fathers of the Christian Church,1 for it detailed events of the Messiah before his coming, as well as expanded upon parts of the Old Testament. The text was lost (or, more properly, destroyed) in the fourth century when it was deemed heretical, it wasn’t until the 18th century that the book resurfaced from an Ethiopian source, and a very interesting part of Judeo-Christian scripture was brought back to life.

The book of Genesis describes “the Sons of God,” a title for a group of angels taking wives from among “the daughters of men” and spawning a race of giants that were seen as evil and wicked,2 and shortly there after YHWH decided to flood the world to rid it of wickedness. Part of the text in the Book of Enoch is the expansion on this story, how the Sons of God, the Watcher Angels, descended from heaven to mix their holy nature with human blood, creating a race of violent, cannibalistic giants, as well as teaching humanity such things as the creation and application of make-up, writing, magick and astrology,3 as well as “slaying spirits” and “the smitings of the embryo in the womb.”4 The book also contains YHWH’s swift and harsh punishment for the Watchers and their children, mainly being slaughtered, and eventually they are seen as the cause of the biblical flood.

Aside from this story, The Book of Enoch follows Enoch’s assumption into Metatron (but not mentioned by name), going along with Enoch as he is led through Heavens, Hells, Underworlds and the “prison of the angels,” as well as being shown various revelations of the Apocalypse. The apocalyptic vision starts with a vision of the Messiah yet to come (at the time of the writing, or still to come from the Jewish perspective) and his work in the world, to the future of increasing wickedness before it all ends. While travelling the heavens Enoch is shown how the skies and stars work, and the intimate connection between angels and stars.

The R.H. Charles translation, originally published in 1912, is still considered “the standard English version of The Book of Enoch, and one which has widely commended itself for the quality of its English, no less than for its sound textual basis.” (p. xv)) Despite the somewhat dated English in this translation it is very readable for the modern person, as well as being a very complete version, based upon several different manuscripts and illustrating what sentences and fragments only appear in one text or another, to allow the reader to grasp the story, as well as some of the history of its writing.

The Book of Enoch is a very interesting text unfortunately removed from biblical canon, and an excellent translation of the work relevant to people in the Judeo-Christian-Islamic faiths, ceremonial magicians, and a wide variety of Pagans.