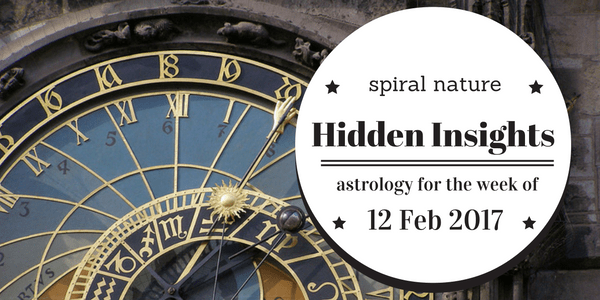 We are in the final week of Aquarius season at Hidden Insights, with the Sun moving into transcendent Pisces on Saturday, 18 February 2017.

The energies this week are marked by productive upheaval, creative expression, and personal plot twists. The key to it all, always, is deciding whether you want to work with what’s available, and whether it’s right for you at this time.

That’s the kind of independent decision-making that Aquarius would want to send you off with in its final days. And with spiritual Pisces just around the corner, it’s best to move forward with clear intentions and a firm grasp on your own honesty and integrity.

But there is always room for deeper truths, and often, those truths can be found through listening to your inner world. The Pisces energy we are moving into soon can do a lot to guide you inward if you are feeling lost, or if you are in need of a deeper anchor — one that is rooted in the heart.

Lofty ambitions — that’s what I see as a major theme for you this week, Aries. We’re into the final week of Aquarius’s airy energy, a space where you can typically vibe pretty well — use it to your advantage. Make that last push, get super clear on your next move. Whatever you do, don’t hold yourself back this week. Once we move into dreamy Pisces on Saturday things can start to feel a bit hazy, so go get it while you can.

Suggested crystal for the week: Carnelian

The pressure is mounting, Taurus. Make a move. I know you typically like to take your time, but whatever you is tugging at you these days, do it. Even if it seems small and insignificant, like a new haircut or a wardrobe update, even if it seems overwhelming and life-changing, just go with it — shift your energy. Shift your routine. I know spring isn’t here quite yet, but I think it’s time to breathe some new life into your world.

Suggested crystal for the week: Shungite

Who are your mentors, Gemini? Who are the people who you might be able to help hold you accountable to your goals? Who is guiding you along the way? We can’t always work alone. If you don’t already have an inner circle who is helping you to work out your life’s plans, I think the coming weeks would be an excellent time to seek out some magical individuals who can help you grow. They might be friends, therapists, coaches, intuitive healers, teachers, or anything in between — you need what you need.

Suggested crystal for the week: Amazonite

Don’t let your waters become muddied, Cancer. Last week you had so much fire to work with, but now you might be struggling to stand your ground. You are so much further along than you might think, but this week looks like you could question yourself in a way that could send you taking two steps back instead of two steps forward. Stay clear about what you need to maintain control and structure around, and be careful that you’re not indulging in too many distractions — guilt looks like it could rear its head in the days to come, too.

Suggested crystal for the week: Mookite

You are unstoppable this week, Leo. In these final Aquarian days, I think any obstacle you’ll run into is just an illusion, something for you to be aware of, but nothing that can actually keep you down. I see you feeling perfectly at home with every aching, longing ambition you harbour. I see you feeling completely determined in becoming exactly what you want to be in this lifetime. And I see you getting clearer and clearer about what you need to step into in order to make it happen. Your stage is waiting.

Suggested crystal for the week: Pyrite

We start off the week with the Moon in Virgo, helping to amplify your energy. Even though we just had a Full Moon on Friday, I feel like you and the Moon can still benefit from a bit of one-on-one time together at the start of the week. Go for a walk in the moonlight, or light a candle for the Moon on Sunday or Monday evening. Send a message of gratitude out to her. I have a feeling that you’ll receive an important message back in the days to follow.

Suggested crystal for the week: Moonstone

Use your charm this week, Libra. Even if you don’t see yourself as particularly interesting or charismatic, remember that you have no idea how others see you. So trust in the presence that you can bring this week, because I think the atmosphere will change whenever you walk into a room. What do you want to do with power like that? How do you want to be remembered? What kind of point are you trying to make right now?

Might I suggest a little assignment for you this week, Scorpio? Come up with an alter ego for yourself — not something that takes you away from who you are, but something that allows you to bring out an aspect of yourself that doesn’t often get much play. If you want to take it a step further, I would even write a mini-manifesto for this alter ego, as if you are laying some rules with which to operate throughout the week. Once you have a new identity in place, try it on for size in the days to come and see what transpires.

Something is changing for you on a deep, deep level Sagittarius. Don’t fight the process. You are on the cusp of uncovering some much-needed truths about yourself, and about what you can really accomplish in this world. Be careful not to overwhelm yourself on this path, though. I think that in the days and weeks to come, you might have moments when the weight of this world feels a bit too heavy, even for someone as strong as you. So don’t forget that you matter, too. Be present and patient with yourself.

How can you surprise people this week, Capricorn? You might need to catch someone off guard with a bold new plan or idea — especially if anyone has started to assume they have you all figured out. Because it’s time for a new challenge, something that you have yet to conquer, and it can be whatever you want. Maybe you’re realizing that your values have changed, and your life has to yet to catch up. Or maybe you’re ready to squash every assumption that people have made about you. Take a look at what’s feeling tired, and decide how to shake it up.

Do yourself a favour this week, Aquarius. Pay attention to any dreams, ideas, phrases, or pieces of inspiration that come to you this week, or that have come up in the past. Pick one thing and create something out of it. Yes, this is creation for the sake of it, but I think it’s going to help to feed your imagination and kick start something deep within your soul. Even if you just spend an hour or two on it, the process itself can be enough.

Dream, Pisces. Dream about the month to come. Tap into these final days of Aquarius energy to get hyper-clear about what kind of tone you want to set for your year ahead. Map out your grandest visions. Connect with your highest self. Pull some tarot cards, or treat yourself to a reading. Use this week to get a head start on the Pisces energy we are about to move into. I think you will be flying high in the weeks to come, so it’s best to act fast.