Yvonne Aburrow is one of my sister writers at the Patheos Pagan channel and she’s also the author of the newly published book All Acts of Love and Pleasure: Inclusive Wicca from Avalonia Press.1 I had the opportunity to catch up with her recently and I asked her about her practice and her new book: what inspired it, what drove it, and how it connects to issues that are currently hot topics in the Pagan community.

Sable Aradia: So tell those who might not be familiar a little about you. What is your background in the Craft?

Yvonne Aburrow: I was initiated into Gardnerian Wicca in 1991. The thing that made me realise that I am a Pagan was reading Puck of Pook’s Hill, by Rudyard Kipling. I was lucky enough to find a coven that was also interested in our connection to the land and local deities and spirits. I am also interested in Hinduism, Taoism, and Norse, Anglo-Saxon, Celtic, Sumerian, and Roman Paganism, and my personal or household deities include deities from several different pantheons. I enjoy the earthy and sensual aspects of the Craft, and I believe that Wicca is a partnership with the deities, rather than them serving us, or us serving them.

I understand that you’ve been practicing what you call “Progressive Wicca” for some time. What inspired that change in the way you do Wicca?

In Britain, the ideas put forward by the Progressive Wicca movement are now largely uncontroversial and most people practice that way.

Wiccans in Britain and Europe keep in regular contact and share ideas, we are (mostly) very fond of each other, even when we disagree about something, so we don’t really have schisms or the creation of new traditions every time someone changes a tiny aspect of a ritual — this is just accepted as people putting their individual stamp on the way they practice Wicca. 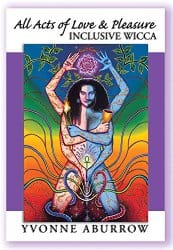 What made you decide to write this book? What inspired it?

My coveners kept asking me to recommend books for them to read, and there were very few books on Wicca around that I felt reflected the reality of the Craft as I was taught it, and as I continue to practice it. All the books out there were too authoritarian, too dogmatic, too duotheistic, or too prescriptive.

I also had an issue with one person who assumed that what it said in a book that she had read must be true for the whole of Wicca, despite me telling her that it was not how I practice!

I had always planned to write a book on Wicca, but was not sure what my unique angle was going to be. Then I realised that there were aspects of the Craft that needed to be discussed that were not being discussed in much depth, like how we view gender and sexuality. So it seemed like the right time to address the topic of inclusivity.

You included a chapter on Wicca and science (which I rather liked.) Why did you feel that this information was important?

I find science really interesting and a source of inspiration, and I find it sad that science is too often presented as being a natural opponent of religion. However, many Wiccans are involved in either science or information technology, and so it is a rich source of symbolism and inspiration for ritual. Recently I bought a great tarot deck called the Science Tarot, and it has Schrodinger’s cat for the Wheel of Fortune, and other cool stuff.

Wicca is often accused of being gender-essentialist and heteronormative. Do you believe that these criticisms are valid for the Wiccan faith overall, or do you believe that a vocal few give the rest of us a bad name? In other words, did you write this book to correct misperceptions or to blaze a new trail?

I think that much of Wicca is heterocentric, and has an overly simplistic view of gender and sexuality. However, there are a lot of Wiccans who are trying to educate ourselves about gender and sexuality, and I wanted both to empower that tendency, and to correct the public misperception that all of Wicca is dogmatic and heteronormative.

I think there are many more people who are quietly trying new ways of relating to the deities, and educating themselves about issues of inclusion, but there are also some voices raised in defence of the heterocentric paradigm.

I am also hoping that — whilst Wiccans need to discuss the topic of gender and sexuality — that this will not be a massively divisive issue. That is why I have stressed that I am expanding ideas of fertility and polarity, not doing away with them completely.

The concept of resonance (named by Ed Gutierrez) is also a really useful one. Resonance is when a group of people are working magic together, and achieve a harmonious group energy which is great than the sum of its parts. Resonance can also be used to create energy and magick, so it doesn’t have to be exclusively about polarity. I have actually been experiencing resonance for a long time without actually knowing there was a name for it or articulating to myself that that was what was happening. It was quite an “Aha!” moment when I was introduced to the concept (after the book had been published!)

I was rather fond of your chapters on deities and on the nature of truth and that your approach to Wiccan theology was practical and informative. What is your personal belief on the nature of deity? (Understanding that you would not presume to judge for anyone else; your book makes it very clear that respect for everyone’s view is your goal and opinion.)

Personally, I am a polytheist. I believe in many gods and goddesses — not as aspects of deity or of the masculine and feminine principles, but as individual deities. The focus of the Craft upon specific deities (Aradia and Cernunnos), I regard as being devotion to the patron deities of the Craft. I think the nature of the deities is beyond our perceptual capabilities — we can perceive one facet of their natures, but beyond that their magnitude is difficult for us to apprehend, because they live in more than the usual number of dimensions, and they perceive things differently to us. We are all distinct identities (but not discrete entities) within the universal energy-field. My energies can overlap with those of another person (deity, wight, animal etc.). I think that the numinous pervades the universe, and is more concentrated in some bits, giving rise to consciousness (both incarnate and discarnate entities, some of which are more powerful than others).

As the Craft is focused on practice and not belief, it is perfectly possible to have different beliefs within the same coven without it causing conflict. I don’t believe in anything unless and until I have experienced it for myself, and then I come up with a working hypothesis to explain it. This could easily be mistaken for a belief system, but there is a distinction. I believe that water consists of two hydrogen molecules and an oxygen molecule, because I have been given reliable scientific evidence to suggest that this is so. I have a working hypothesis that reincarnation happens, because certain subjective evidence suggests that this is the most likely explanation of flashback or spontaneous regression experiences.

You stated in your chapter on Invocation that you did not believe that full “possession trance,” whether in the context of drawing down the moon or sun, or, say, as part of a Vodun ritual, was a “beneficial practice.” Can you explain why you feel that way?

Perhaps it was unfair of me to say that, as I have never experienced full possession trance. However, the benefits that I have derived from invocation have largely been because I was fully aware and present while the deity was invoked on me, and I am unsure how you can gain the benefits of the deity’s presence if you don’t remember what happened while you were invoked. I also noted the distinction between a Buddhist practice where you become unified with the deity and enter their realm, whilst remaining aware, and the practice of possession trance in which the practitioner loses any sense of themselves in the process.

Do you think the nature of Wicca is changing? What would you like to see for Wicca in the future?

It is hard to say whether the nature of Wicca is changing. I hope that Wicca will become more inclusive of people with disabilities, people of colour, and gender and sexual diversity.

This isn’t your first book; where can we find your other books?

They are all available on Amazon or via my publishers. I have a page dedicated to my books on my website.

I regret not having included a chapter on including people of colour. I had naively assumed that people of colour were not structurally excluded by the way that Wicca is set up, and that Pagans were less racist than the rest of the population.

I finished writing the book in August 2014, just before the news about Ferguson really came to the fore, and before the Black Lives Matter protests started. It was only then that I started blogging about people of colour.

The experience of Black and minority ethnic people in Britain, and in British Paganism, are somewhat different than their experiences in the US, and in North American Paganism. It is a very complex topic, and I did not want to write something that might be a shallow contribution to the topic. I have, however, written a couple of blog posts in support of the Black Lives Matter campaign, and am trying hard to educate myself. I have always been opposed to racism, and find it sad that we live in a racist, homophobic, misogynistic culture, and that it is hard to escape from the structural inequality and divisions that separate us.

If there is another edition of my book, I would certainly include a chapter on this topic. I am currently reading the excellent book Bringing Race to the Table: Exploring Racism in the Pagan Community, edited by Crystal Blanton, Brandy Williams, and Taylor Ellwood, and strongly recommend every Pagan should read it.

There are plenty of topics around including people of colour in Wicca, such as which deities we choose to honour, how we tell the stories of the development of witchcraft and shamanism, and how we respond to people of colour wanting to join our covens.

Many years ago, I made a pair of statues of Ishtar and Tammuz, and deliberately made them Black, to honour the divinity in Black people. They still occupy an honoured place on my altar. I also honour Shiva and his consorts, so my practice is not exclusively Eurocentric.