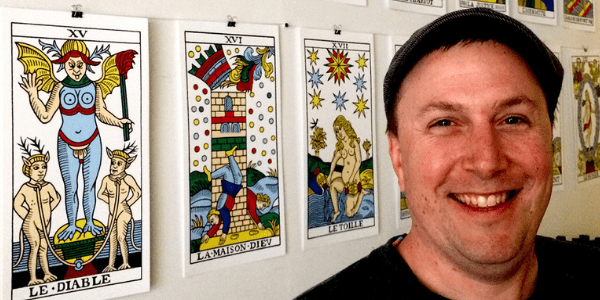 Andrew McGregor is a treasure to the occult community. Happy to share his passion for tarot and the occult, he is the creator behind The Orisha Tarot, and the owner of The Hermit’s Lamp in Toronto. I met Andrew McGregor in May 2018 at the Third Annual Tarot and Psychology conference held annually in Queens, New York. His booth was overflowing with unique decks and tidbits, all created by Andrew himself. I stood captivated, browsing his 90-Question Deck, contemplating the profound questions illustrated on each card. As I pursued, I overheard him talking to Carrie Paris at the table next to him about their upcoming mediumship class based around their joint collaboration the Magpie Oracle Seer Charms. “Who is this person?” I wondered. Following the conference, I reached out to McGregor about scheduling an interview about his most recent deck publication, which I thought was The Land of the Sacred Self Oracle — a profoundly visual deck I also was captivated by at his conference booth. Upon starting the interview — scheduled smack dab in the middle of Mercury retrograde — I quickly came to realize he thought we were discussing his upcoming deck, The Orisha Tarot. Alanna Wright: You have a new deck coming out! When is the release date? Andrew McGregor: The official release date is 8 September 2018. That’s what I’m hearing from the publisher [Llewellyn Worldwide] and Amazon. Could you tell us a little bit about the deck? I came out of a background in western ceremonial magick and working tarot for a long time. About 18 years ago, I made a shift into working with the Lukumi religion, Orisha. I studied with my elders and went through ceremonies and eventually became a priest. Having a background in other fields, I always look at where they overlap or have similar approach, and where they different. This deck is an exploration of where traditional Afro-Cuban religion and tarot overlap philosophically and mystically. That’s fascinating! And you created all the art yourself? All the artwork is mine and I wrote the book that goes with it. Once I sat down with it, it took me about a year. But I was playing for some time with the aesthetic and how I really wanted to encode the images. How would you intend this deck to be used? Would you say it is more for divination or meditation? It’s definitely a deck that’s meant for doing divination with. People will be able to do readings and understand how the stories could apply to the situation, how these symbols could be read — just like you could read any other tarot deck out there. But I am also hoping for the people who are practitioners of the Orisha religions and interested in tarot to give them a bridge to step further into it. And those who know tarot, they can use the worldview to help them understand a bit more about Orisha ideas and where they come from. Could you tell me a bit about the Orisha tradition? The Orisha tradition I practice is Lukumi. It’s a tradition that originates in West Africa in the part of the world where Nigeria is today, and some of the surrounding countries. The Orisha traditions were brought through the Atlantic slave trade to the Caribbean and Americas. My particular lineage is in the Cuban part of the diaspora. In the Orisha tradition, we believe there is one source of creation and through the act of creating, Olodomare also brought into being these spirits called Orisha, who are responsible for different areas of life and ideas. We work with these spirits and build relationships with them. If one becomes initiated, you may receive consecrated tools for interacting with them. We believe divination is important too. Through it we can understand our destiny, and what we can and cannot do in certain situations to live in alignment with who we are meant to be. We also believe in reincarnation, that we return to here again after this life. The tradition involves music, drumming, singing, and spiritual possession, all of those different types of ideas. How long did you say you’ve been practicing this tradition? About 18 years now, and in August, I will have been a priest for 10 years. What initially drew you to the Orisha tradition? Do you have any cultural roots connected with the tradition? A friend shared their interest with me, and it just kept growing until it became the centre of my spiritual life. What are some ways you feel tarot and Orisha tradition overlap? 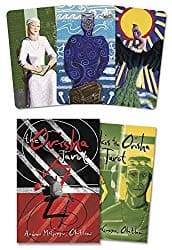 I am looking forward to seeing people using it and hearing about their experiences. I am so excited to see it come to fruition. It’s something I’ve been thinking about for the last six years, and working on for the last two.